When it comes to creating award-winning films, still photographs and music, Elijah Hasan is a natural.

His eye for unique framing, his natural curiosity about the world around him, and his passion for telling the stories that exist within his community in Portland have resulted in a wide range of film work, focusing on the Black experience.

The list of awards and accolades he’s received for that work is equally long and continues to grow. Late last year, for example, he received a Betty Bowen Award, presented annually by the Seattle Art Museum to Pacific Northwest artists to recognize original, exceptional and compelling work. More recently, promotions for a screening of two of his films in celebration of Black History Month praised Hasan for creating “work that knows no boundaries or genres as he moves between documentary, experimental, and narrative filmmaking.”

However, for all of his artistic talents, learning how to blend his art with the world of business has been a bit more of a challenge for Hasan. Still, it’s an effort he’s been willing to make to develop his skills as an entrepreneur. “If you really want to do what you want to do, you need to be your own boss,” Hasan says. “That way, you can supplement your artistic lifestyle through being in business for yourself.” 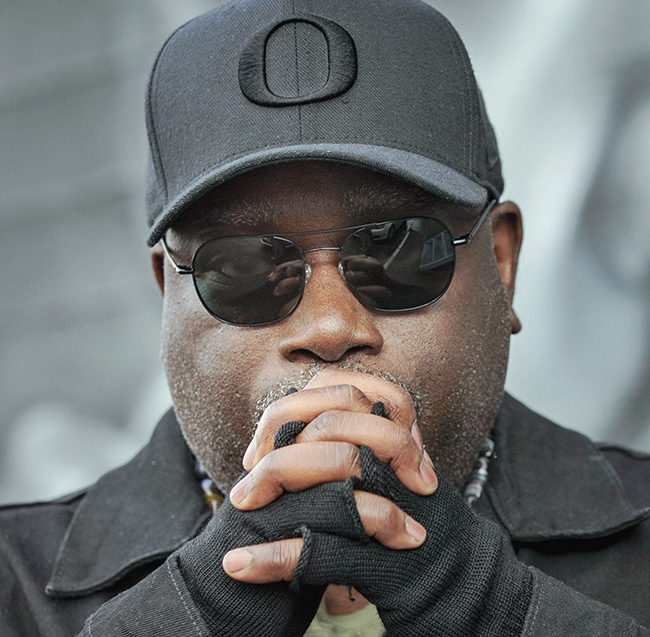 Elijah Hasan is an artist at heart, but an entrepreneur by necessity. Handling his commercial filmmaking, video, music and still photography as a business allows him the freedom to focus on personal projects that document and explore the experience of being Black in Portland and in America.

Multitasking:
“The truth is, I jump around a lot. Maybe some folks would say I have (attention deficit disorder), but I turn that disability into asuperpower. I have different workstations set up around the room for different tasks … it’s like a fantasy creative musical chairs. I haven’t seen a similar model anywhere, but it’s what works for me.”

Building a next-generation business:
“Part of a business plan is supposed to be eventually selling the business. But if I have built a successful business, why wouldn’t I pass it down to my kids or family? So, I have to be very conscious of the decisions I make as a business person. I know the traditional model is a broken model, so I’m creating a hybrid business model to serve my needs and my art and my community — and to truly be a sustainable model.”

Growing as an artist:
“As an active artist, I’m always seeking grants and fellowships to improve my craft and to challenge my art. I look forward to chances to be around artists who are better than me, to help me learn and continue to grow.”

READY FOR A CLOSE-UP

Hasan was introduced to still photography at the age of 9 while attending an after-school program at Irvington Elementary School in North Portland. He soon progressed to developing his film and making prints in a darkroom.

“At a very early age, I was immersed in photography,” he recalls.

He continued taking still photography classes at Lincoln High School, where he joined the yearbook staff as a photographer. As film gave way to digital photography, Hasan began playing around with making videos. By the time he graduated from high school, he had developed an interest in composing and performing music. His father had purchased a video recorder, so Hasan and his brothers began using it to make their own movies. The experience opened up a new world.

“It was incredible,” Hasan says. “We couldn’t edit, so we edited as went. We had to think our way through the whole thing.”

Before too long, he found his way to Portland Community Media, a Northeast Portland nonprofit group now known as Open Signal that provides classes in multimedia such as filmmaking and television production. Hasan started focused on music videos and then began producing his own cooking and entertainment shows. He also took some classes that resulted in a couple of documentaries, including “One Strong” about a woman who had breast cancer.

“I didn’t really consider myself a filmmaker at the time,” Hasan recalls.

A good friend, David Walker, who now works as a writer for Marvel and DC Comics, thought otherwise. Walker and Hasan had worked together to open the Computer Clubhouse, a program where young people in Portland could go after school to learn how to use their creativity to create technology, music and film. It was while working at the Clubhouse that Hasan first dipped his toes in the waters of animated film. He was looking for a way to get kids interested in attending the program and remembers an animated short film he had seen. He did some research and realized the process consisted of creating a series of photographs. He began to experiment with the concept and eventually created a piece titled “This Is Me.”

Walker encouraged Hasan to enter the animated short in a film festival. Hasan filled out the paperwork that Walker handed him and was pleasantly surprised when the film was accepted. The festival gave Hasan a chance to see his work on a large screen for the first time. It also gave him a taste of filmmaking success when his submission won both Judge’s Choice and Audience Choice awards in the experimental category.

But the biggest eye-opener for Hasan was still to come at the festival. At the end of the film screenings, Hasan and the other directors were all invited to come on stage for a panel discussion.

“As I was standing on the stage amongst those other filmmakers and they’re calling us filmmakers, it was at that point I thought, ‘I guess I really am a filmmaker,’” Hasan recalls. “I realized, ‘I can do this.’

“From that point on, I started to approach it as such. Not just as art, but as a proactive discipline … with the intent of finishing things for the screen.”

His identity as a filmmaker was further reinforced one year later when he was selected for an Oregon Media Arts Fellowship on his first try.

“When I found out I won and looked at who was on the panel, to have them pick my work, that really gave me another sense of validation. These are professionals choosing my work as worthy of this level. I always saw my filmmaking as art, but now I was seeing in a different light that took it from hobby to craft. That was the era that I really began to pursue it seriously.” 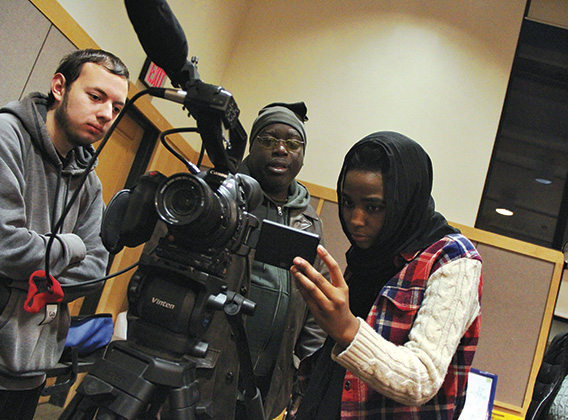 A still photography class that Elijah Hasan took at the age of 9 during an afterschool program at Irvington Elementary School in Portland sparked an artistic passion that has grown to now include filmmaking, composing and scoring music, and fine art photography.

Nearly 15 years later, Hasan is a one-man show when it comes to making his films. In addition to serving as a writer, producer and director, he also composes and performs the musical scores. He’s built a solid reputation that now brings commercial film, video and still photography work to his door without the need to do major marketing.

But while that work pays the bills, Hasan also has passion projects that feed his need to create art. He knew he needed to find ways to turn his art into streams of steady income so that he would have the freedom and time to work on those personal projects.

“I had an idea about this stuff, but you can’t really appreciate the details until you start to cross your ‘Ts’ and dot your ‘Is,’” Hasan says.

He turned to a Portland-based nonprofit, Micro Enterprise Services of Oregon (MESO), for help. The organization provides business education and access to capital to help entrepreneurs start and grow micro and small businesses.

Hasan started out by enrolling in MESO’s Business Basics series, where he learned how to create a business plan. Through the Individual Development Account (IDA) program, he saved money and used the 3:1 match to purchase business assets. MESO has also helped him identify how his work can provide continued sources of income by offering licensing to screen his films, speaker services, education curricula he’s developing, fine art prints, and even apparel.

The solid foundation he has built allows him to draw clear lines between his business and his creative work. He feels it’s a division that is important to his dual identities as an artist and as an entrepreneur.

“I still keep a balance of art and creative teaching and commercial businesses because I’m not a capitalist,” he says. “I don’t think any artist can be a capitalist. When you start thinking about how much money you’re going to make, it’s not about creativity anymore. But there is a place for (a business mindset). Being in an entrepreneurial mind allows me to do more art.” 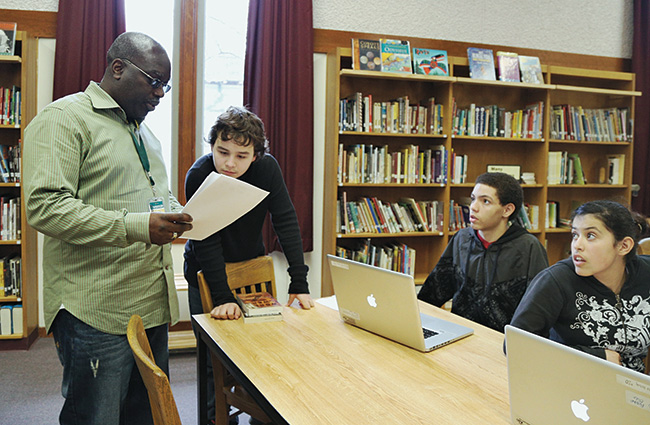 As a teaching artist, Elijah Hasan helps young people learn how to express themselves through creative media such as fi lmmaking, photography, music and writing.

During the first few months of the pandemic last year, many of Hasan’s commercial projects were put on hold. However, as that work has returned and has held steady, he’s been able to take some time to focus on personal projects, including a documentary on the experiences of Black police officers in Portland.

He also continues to develop the business side of his creative efforts. He’s currently working up updating and expanding his website, including adding e-commerce components.

“I’m still making that transition of creating something and once I’ve created it, figuring out the process for marketing it to sell it — especially in ways that can be replicated to make passive revenue,” he says. “Five years from now, I would love to have the commercial end of my business be 98% on my website. That being the main driver of income will allow me to focus on my work as an artist.”

No matter how busy he may be, however, he makes sure to find time for another passion project: teaching young people how to express their ideas and experiences through film, video, music and other artistic outlets.

“The young people I teach, I think I get the most out of those experiences. The energy exchanges give me something I don’t get anywhere else.” 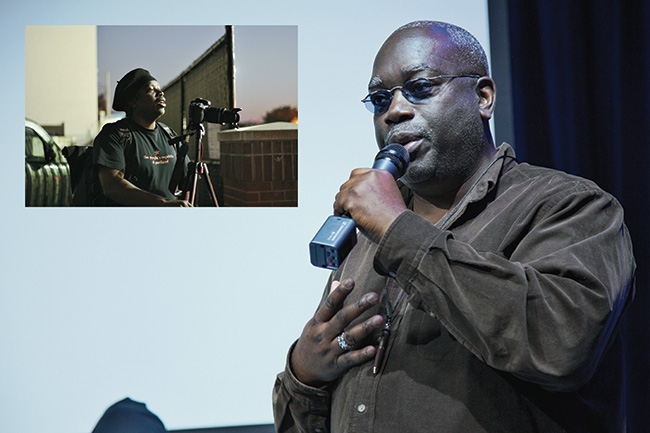