KENECHI ONYEAGUSI, THE NEW EXECUTIVE DIRECTOR OF PROFESSIONAL BUSINESS DEVELOPMENT GROUP, IS READY TO ADD HER VOICE TO CONVERSATIONS IN THE INDUSTRY

Kenechi Onyeagusi was just a few months into learning the basics about the construction industry in her role as executive director of Professional Business Development Group when the COVID-19 pandemic sent Oregon’s economy into a tailspin. Almost overnight, she found herself on a fast-track to not just learn what the trade group’s members needed but also figure out how to locate resources that would provide the most support.

Having to hit the ground running is nothing new for Onyeagusi. She started her previous career in banking just two months before the Great Recession rocked the country. That experience taught her a lesson that has come in handy recently.

“You get the best and the richest learning under the toughest circumstances,” she said. “You just have to find your mental space.”

Onyeagusi never planned on a career in the construction sector. But last year, after 12 years in banking, she was thinking about making a change. She’d had a good run in that industry, working her way from an analyst position to a title as an executive, but she was ready for a new challenge. “

(My banking career) was great, and I had a lot of fun doing it. But I was ready for the next thing,” Onyeagusi said. “I felt like I wanted to do something that was more in line with my heart – serving my community, working with people who look more like me.”

Exactly what that “something” would be, however, was still a mystery until she started talking with Faye Burch, the owner of the construction consulting firm FM Burch & Associates and a co-founder of PBDG.

Burch and other PBDG co-founders like Mark Matthews of Pacificmark Construction and Maurice Rahming of O’Neill Construction Group had been sharing duties running the trade association. But with the opening of PBDG’s new business development and training center late last year, Burch and the others knew the organization had reached a point that they needed to bring someone on board to serve as the public face of the group.

Onyeagusi had visited the training center shortly after it opened and had been impressed by the enthusiasm the board had for it mission. So, she was intrigued when Burch suggested she consider taking on the executive director job. Especially tempting for Onyeagusi was the fact that the training center has opened new avenues of possibilities for partnerships and projects for PBDG.

“It was exactly the challenge I was looking for,” she said. “I’m an entrepreneur at heart, so the opportunity to build something was irresistible to me.” 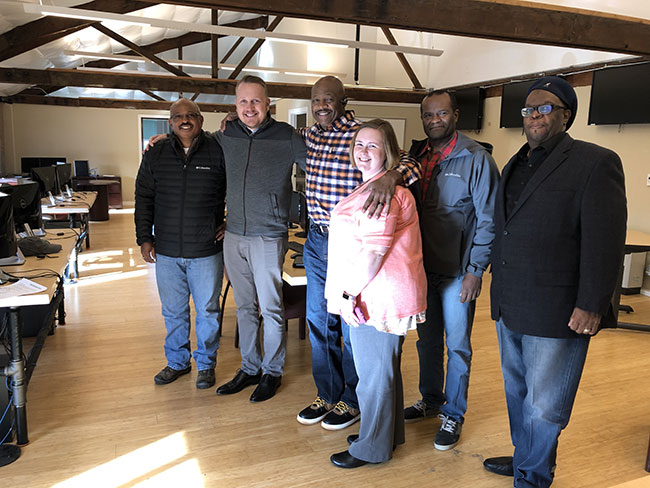 “You get the best and the richest learning under the toughest circumstances. You just have to find your mental space.” – Kenechi Onyeagusi, executive director of Professional Business Development Group

As PBDG’s new executive director, Onyeagsui barely had time to dig into that anticipated challenge before finding herself suddenly faced with a mountain of unexpected ones as the novel coronavirus began to take a toll in Oregon.

Businesses in many industries were forced to shut down in a state-mandated attempt to prevent the spread of the infection. However, Oregon Gov. Kate Brown categorized construction as an essential industry, leading many people outside the industry to assume that contractors, subcontractors and professional construction services firms had little to worry about. That was far from the truth, however, according to Onyeagusi.

Many smaller companies in the construction industry, a pool that includes PBDG members, were facing uncertainty. Already hampered by skilled labor shortages, they worried that the workers they had might be afraid to come to work even with a solid set of safety practices in place. As they watched other states shut down construction activity, they wondered if the same would eventually happen in Oregon.

Onyeagusi and the PBDG board were there to help their members from the start. Onyeagusi spent days helping fill out applications for emergency relief funding. She reached out to banks to find which would be willing to take on new clients in order to make sure that PBDG’s members who had been largely ignored in the first round of the federal Payroll Protection Program weren’t left behind in the second round.

She also became aware of the need to create a better pipeline of communication to make sure that everyone in the construction industry was receiving the same information. In early March, Onyeagusi tapped PBDG partners like the Oregon-Columbia chapter of Associated General Contractors and SAIF Corp. to hold a virtual conference hosted by her group to bring together contractors, subcontractors, agencies and organizations to talk about available resources and ways to keep everyone safe on worksites.

While helping members handle the impacts of COVID-19 has taken up the majority of her time recently, she’s also been finding time to reach out to other trade groups and agencies at the city, county and state levels.

“Being an advocate for our members is a role that hasn’t stopped,” Onyeagusi said. “I’ve been knocking on doors, asking for invitations to the table. I really hope it bears some fruit. We need a diversity of voices, and I would love to be that voice in the room.”

Her experience as one of the few black female lenders in Oregon’s banking scene has taught her that making her voice heard isn’t always easy, but Onyeagusi has the benefit of a powerful mentor and role model in PDBG co-founder Burch, who has a long history of fighting for equity in the industry.

“Filling Fay Burch’s shoes in leading this work within our subcontractor community is no easy feat, and I would like to thank her for being a pioneer woman of color leader in construction,” Onyeagusi said. “I am honored to continue to do this work.”

Onyeagusi’s voice also will be bolstered by the fact that she has the trust and backing of all of PBDG’s members.

“I know I have their support in changing the face of who a leader is or should be (in the construction industry),” she said. “I’m a great example that; they gave that (opportunity) to me.”