Beaverton’s Restaurant Row reflects a focused effort to boost the number of food and beverage options in the city.

Earlier this summer, the city of Beaverton sent out a call to Portland metro area developers, business professionals and restauranteurs, inviting them to a meeting in a building at the corner of Farmington Road and Southwest Watson Avenue. The city wanted to talk with attendees about opportunities to locate a food or beverage-based business in the historic building, which once housed the first bank in Beaverton.

When most buildings go up for sale, the owners don’t pay much attention to what a new owner will do with the structure. But when it comes to the Beaverton Bank Building, the city knows exactly what kind of business it wants to see in that space. The location is a key part of the city’s plan to create what it calls Beaverton’s Restaurant Row.

For the past several years, the city has made a conscious effort to turn a section of Beaverton, from the Round up through the historic downtown area, into a swath of businesses heavily focused on food and beverages with a sprinkling of retail.

The effort appears to be paying off. On a Friday or Saturday evening, streets that just one year ago would have been quiet are now a flurry of activity. Long-time staples of the area such DiCarli, First Street Taqueria, Du Kuh Bee and Nak Won have been joined by Big’s Chicken and Ex Novo Brewing, two businesses that first earned popularity in Portland. The most recent arrival, Syndicate Wine Bar, has helped extend the offerings.

Even before David and Angela Anderson opened Syndicate, they had been watching the foot traffic in the area increase. The couple, who also own a full-service web development company called Canvas Host, looked at a couple of spaces for their new venture, which they describe as “a business lounge by day and a wine bar by night,” before settling on the building at 12620 S.W. First St.

Syndicate is a prime example of how Beaverton has curated Restaurant Row. The Andersons say their business is a bottle shop offering daytime space for people to bring laptops to work as well as event space that can be rented for luncheons or meetings. Once the sun sets, it transforms into a wine bar offering a place for people to gather once they finish dinner at nearby eateries.

“Honestly, this is not a typical restaurant,” David Anderson said. “It’s really about conversations with people, coming in and sitting and talking. Wine happens to be the medium, but it’s really about building connections.” 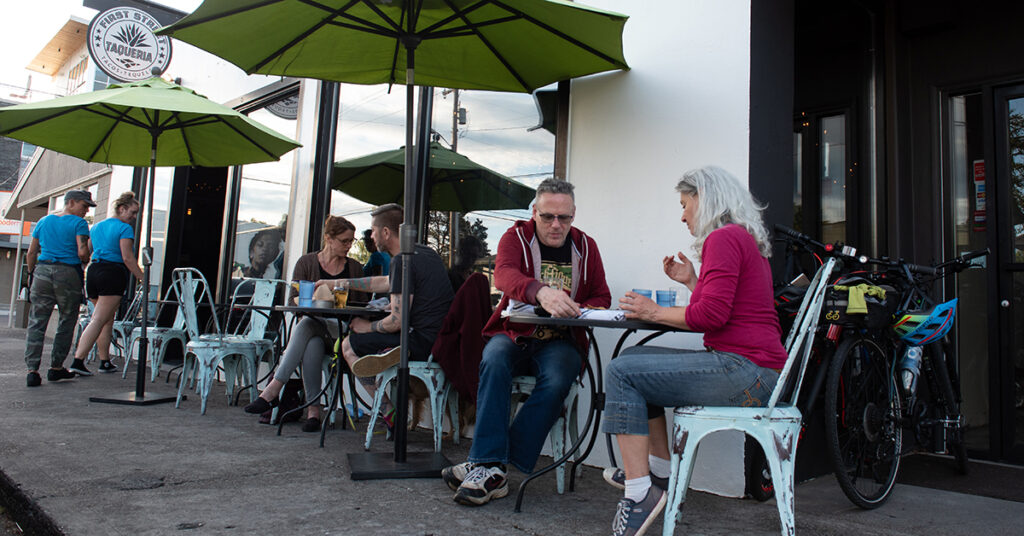 In creating Beaverton’s Restaurant Row, the city has focused on attracting new food and beverage businesses to complement long-time eateries like First Street Taqueria. Photo Courtesy of City of Beaverton

The city credits the creation of BG Food Cartel, a food cart pod on the corner of Southwest Rose Biggi Avenue and Millikan Way near the Round, with providing the initial spark for Beaverton’s current restaurant renaissance.

A focus on encouraging mixed-use developments also has helped move forward the city’s food and beverage scene. The ground floor of a 44-unit apartment building called La Scala on the corner of Southwest Lombard Avenue and Southwest First Street, for example, features the ground-floor Vault Food Hall as well as three commercial spaces that are occupied by food-based businesses that include a wood-fired pizzeria and a vegan bakery.

The Andersons also point to city-created programs that benefit business owners in Beaverton as an added incentive. Before opening Syndicate, the  couple tapped one of those programs, which provides marketing assistance such as creating logos and learning how to better use social media.

Herron and business partner Travis Blasingame tapped one of the grants for minor interior improvements to one of the commercial spaces on the ground floor of La Scala.

Herron, who also owns a firm called Big Idea Group that offers project management and design-build services for restaurants, originally worked on the space for a woman who opened a business there called House Games. When the woman closed the business to relocate to Seattle, Herron and Blasingame decided to open Karver in the space.

The business partners used their grant money from the city to do some interior changes to the space, created art for the walls and tapped a local woodworker to create custom benches and chairs.

Since opening in early April, the eatery and its signature sandwiches and hand-made sides have attracted a steady fanbase, to the point that Herron said he and Blasingame are looking to open additional Karver locations in westside areas such as Tigard and Lake Oswego. 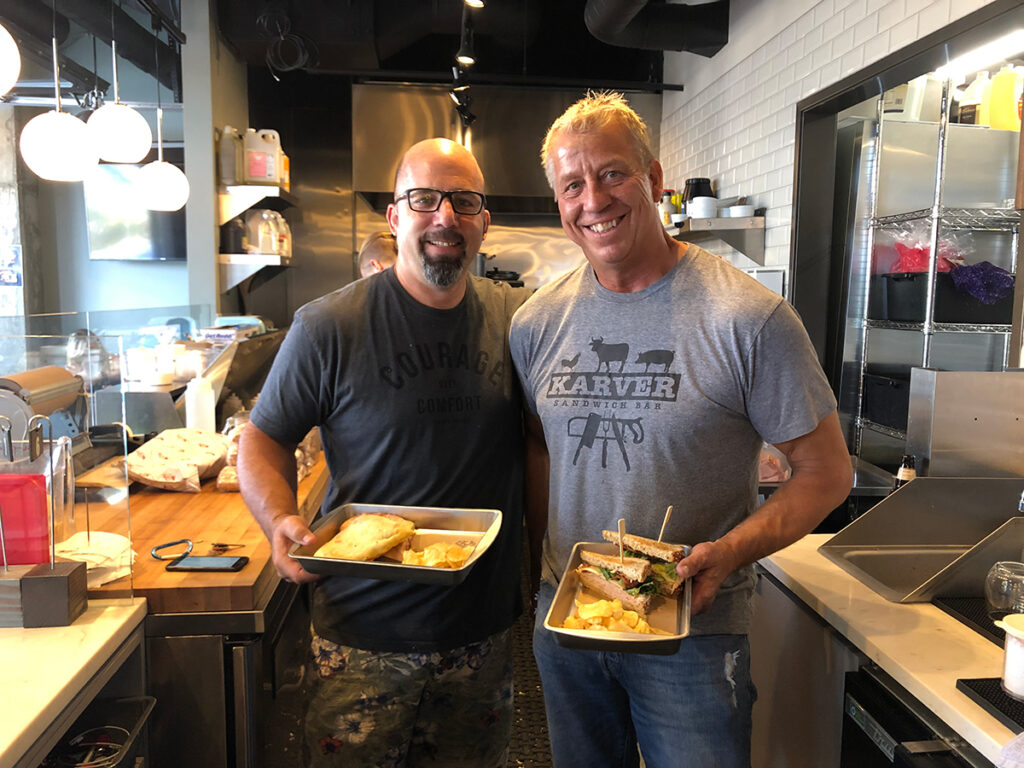 Travis Blasingame, left, and Sean Herron, co-owners of Karver Sandwich Bar, tapped a city of Beaverton matching grant program to help cover the cost of interior renovations for their restaurant space on the ground floor of LaScala, a mixed-use building on the corner of Southwest Lombard Avenue and Southwest First Street. Photo by: Stephanie Basalyga 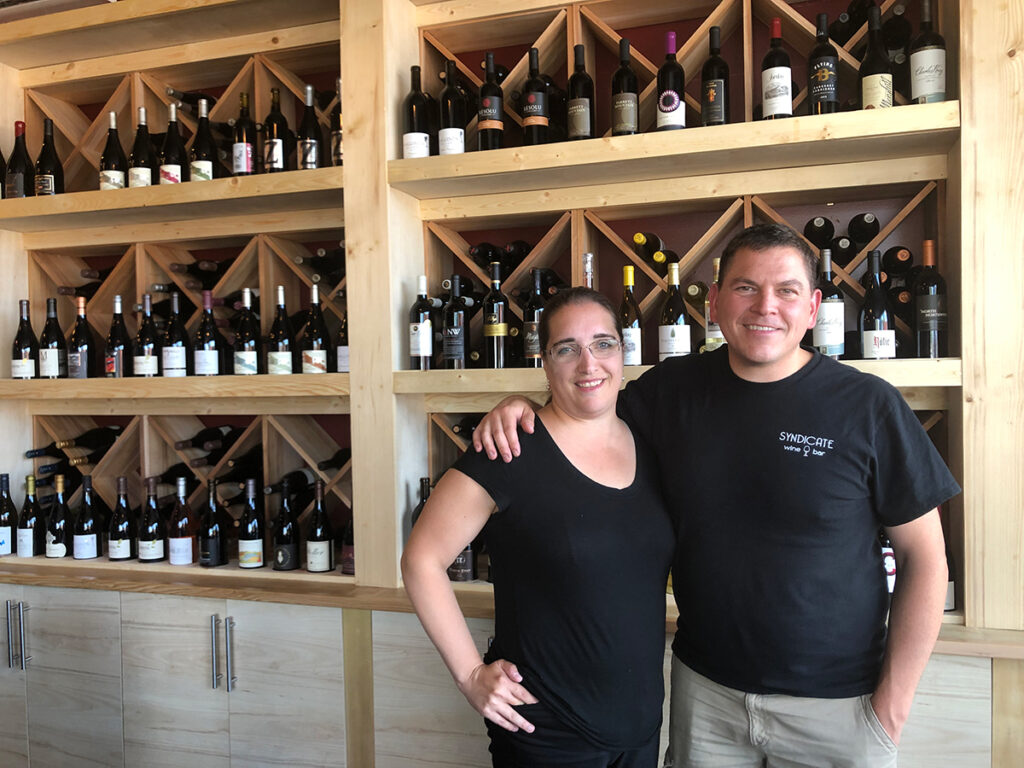 After noticing an increase in foot traffic along Beaverton’s Restaurant Row, Angela and David Anderson decided the area would be a perfect spot for their new venture, Syndicate Wine Bar. Photo by: Stephanie Basalyga

Well begun, not yet done

The major jump in popularity for businesses along Beaverton’s Restaurant Row hasn’t been without a growing pain or two. On busy nights, streets become a snarl of traffic. Herron and the Andersons also pointed to a lack of parking in the historic downtown as something that could end up deterring people from supporting food and beverage businesses in the area.

The city is aware of the issue and is trying to work with business owners to find solutions, according to Michael Williams, the city’s economic development manager. Those fixes will need to be more than temporary, however.

For one thing, there are several new housing projects either in the planning stages or already under construction in the area.

For another, the city still has plans to add to Restaurant Row. Bids for proposals for the Beaverton Bank Building space are due by early September. An eatery called Whole Bowl is expected to open a walk-up window location in a small space on Watson Street. Nearby, on the corner of Southwest First Street, renovations are under way on the Dr. Mason Building. Lionheart Coffee plans to open in the front part of the building while a ramen restaurant will move into the back portion. Across the street, a building used as a dance studio is slated to eventually become a sushi restaurant.

“There’s more planned,” Cheryl Twete, the city’s community development director, said. “By this time next year, the number of restaurants in the area will have doubled.”