TAKE ONE CITY-SUPPORTED SMALL BUSINESS — AND MAKE IT A DECAF

Israel Martinez knew he had what it takes to start and run a successful small business. He just needed an opportunity to prove it.

Thanks to a collaboration between the city of Tigard and a nonprofit partner called Micro Enterprise Services of Oregon (MESO), Martinez is getting his chance. In early October, he opened El Cuadrilátero, a coffee shop in the Opportunity Café inside Tigard Public Library.

Opportunity Café is an incubator model designed to give entrepreneurs like Israel an opportunity to spend two years working with MESO to learn how to successfully run a food business before eventually growing his coffee shop to a point where it will be ready to move it into a regular retail space, which will then open the Opportunity Café location to another entrepreneur. It’s also part of a new approach Tigard has set in place to provide support to BIPOC, women and low-income entrepreneurs, both those with home-based or storefront businesses in the city and those who live in Tigard but have businesses elsewhere.

The new plan represents a shift in how the city invests time and money in economic development in Tigard. Previously, the focus had been in trying to attract more businesses of all sizes to the community. However, as the economic impacts of the pandemic began to take a toll on the city’s BIPOC and low-income residents and businesses, it became apparent they needed to rethink their original model

“That was an ah-ha moment,” Lloyd Purdy, Tigard’s economic development manager, told Opportunity Magazine. “We changed our focus to economic mobility. That’s where we’re putting the majority of our time and resources now. 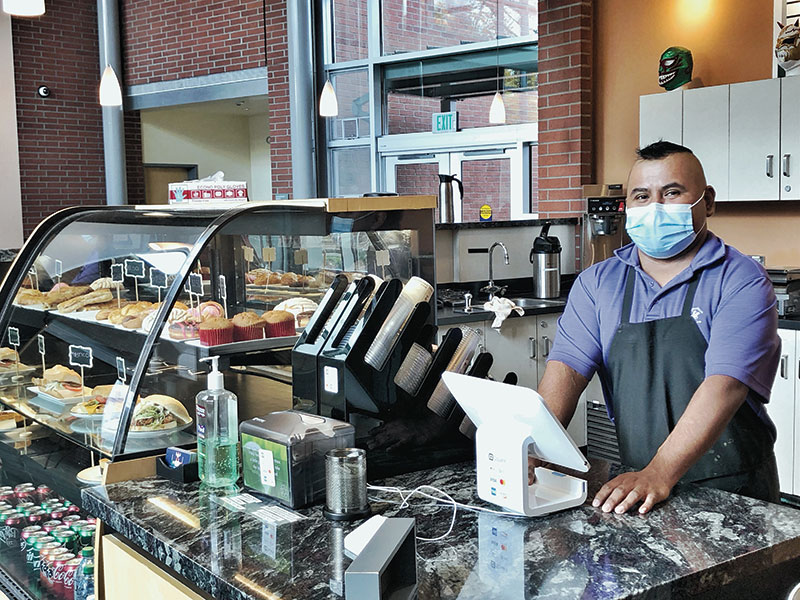 El Cuadrilátero at the Opportunity Café

The Opportunity Café incubator space program had been on the planning board even before the pandemic, but the events of 2020 convinced the city to extend a similar wrap-around mindset to ensure that policies and practices were encouraging and creating a support system to improve the chances of success for its small business and entrepreneur communities, while also encouraging their buy-in.

Since the pandemic hit, for example, the city has waived business license fees for any new business that complete some type of small business advising, coaching or education from any one of the nine nonprofits and community organizations the city partners with.

The city also has created a scholarship program to help cover the cost for current or aspiring entrepreneurs and small business owners to receive training from those same partners. The scholarship can be used, for example, to cover the cost of participating in a Get Your Recipe to Market program offered through the Small Business Development Center or to access training for small contractors in the construction industry through Portland-based Professional Business Development Group (PDBG).

Tigard-based businesses with employees who are Tigard residents also are getting some help from the city and its partner IRCO, the Immigrant and Refugee Community Organization. The city will help cover costs for those employees to receive workforce development training and coaching from IRCO to gain new skills or boost existing ones and move into hiring paying positions with their current employers.

“Businesses are facing challenges right now finding and hiring the right talent,” Purdy said. “Sometimes the right people are those directly in your business, the ones already working for you.” 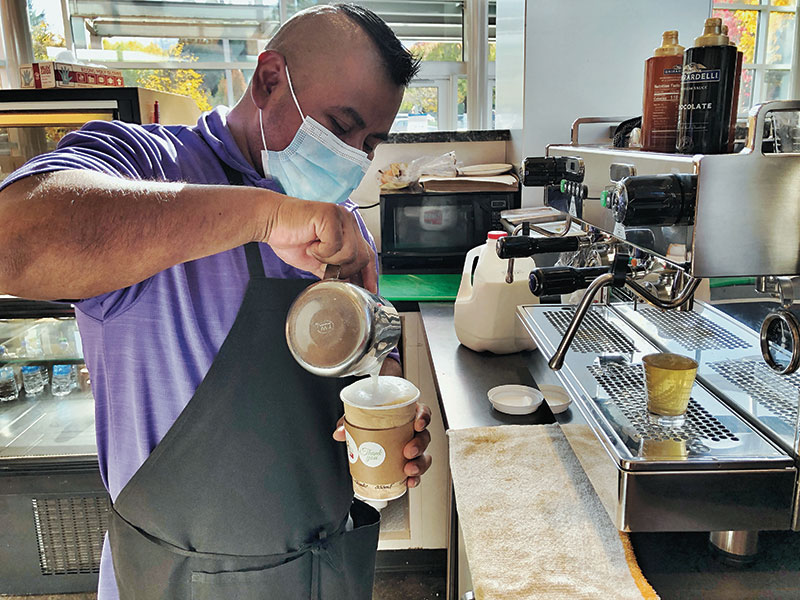 LEFT: The incubator space at the Tigard Public Library, where El Cuadrilátero is located, is outfitted with a commercial espresso machine.

BELOW: Even though El Cuadrilátero has only been open for a few months, owner Israel Martinez says regular items like café‘s signature sandwich already have become favorites of staff and patrons at the Tigard Public Library, where the café is located. PMG PHOTOS :STEPHANIE BASALYGA 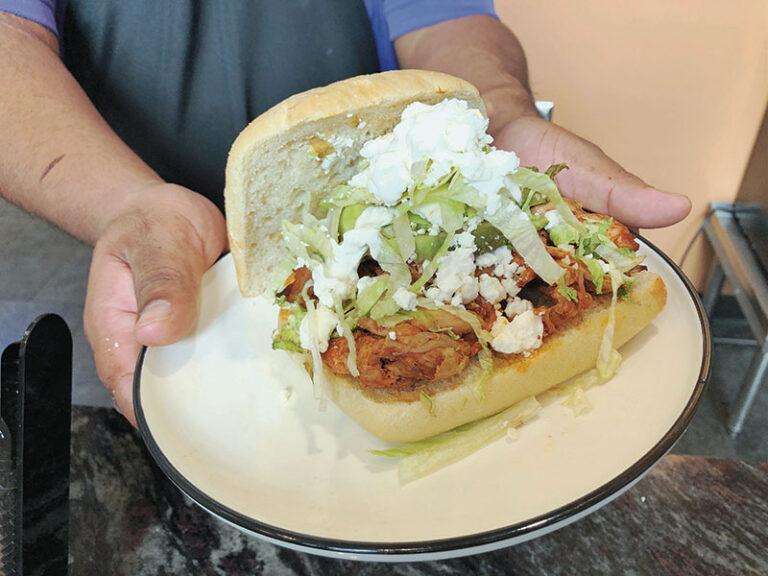 FOOD — AND COFFEE — FOR THOUGHT

In developing its new approach, the city tapped examples of success from both the public and private sectors. The workforce development program, for example, was based on a similar effective program employed by Oregon Health & Sciences University, Purdy said. The business license fee waiver concept is similar to one that the city of Cornelius already had used successfully.

The incubator space concept that forms the basis of the Opportunity Café at the Tigard Library is a common business concept that often has varying degrees of success. Tigard version has been developed in a way that aligns with the city’s current commitment to create a support system for entrepreneurs while also encouraging them to move toward independence and self-sufficiency.

Martinez and his coffee shop, for example, initially is paying a significantly reduced amount of rent for the space in the library building while the business builds a clientele. As Martinez moves thorough his two-year tenancy, the rent will increase slowly until it reaches the level similar to the local commercial market, at which time El Cuadrilátero will be ready to move into a commercial storefront.

Martinez also has the benefit of support from MESO, including assistance with applying for necessary licenses and permits and passing a city inspection. He will continue to receive coaching and attend business classes to develop his business acumen during his time in the Opportunity Café space.

But even with support from the city and MESO, Martinez has had to also self-commit to his new role as a small business owner. He had to go through a rigorous interview process to be selected for the Opportunity Café space. He also had to embrace the flexibility to adjust his business plan, even before he opened El Cuadrilátero. He originally had planned to just offer signature sandwiches, flavored waters and sweet treats. However, when the city indicated they were looking for a tenant that would provide specialty coffee drinks, Martinez added that to his menu.

As a result, he had to add the title of barista to his résumé. The space came outfitted with a machine to make specialty coffee drinks and Martinez spent time with the companies that provided the machine and the coffee brands he uses to learn the difference between making a latte and a cappuccino. His barista skills already have earned fans among both library patrons and library staff, as has his commitment to work with other local small businesses such as La Imperial Bakery, a minority-owned small business in Hillsboro that provides pastries for the coffee shop.

Martinez traces his dream of owning a restaurant back to 2006, when he began working in the industry with the goal of becoming a chef. From an initial position as a dishwater, his hard work, motivation and dedication helped him move into a job as a prep cook. He continued to work in restaurants when he and his brothers moved to Hawaii. By the time he returned to Portland in 2014, he realized he wanted to use what he had learned to open his own restaurant.

He took a big step toward achieving that dream when he attended an information session offered by MESO that outlined the assistance and programs the nonprofit provides. Israel then went on to take business-education classes, including the Business Building series, to gain the knowledge and skills he would need to start a successful company. He worked one-on-one with MESO business specialists, who helped him focus on the exact support he needed for his business and encouraged him to apply for the Opportunity Café spot. He selected a name for his coffee shop that pays tribute to the times when he and his uncle would spend Sundays watching Lucha Libre professional wrestling — a “cuadrilátero” is a wrestling ring.

Even though his coffee shop has only been open for a few months, he says he’s already learned valuable lessons about running a businesses and is eager to help other aspiring entrepreneurs who dream of someday starting and running their own businesses.

“It’s not impossible to start,” Martinez said. “You just need to learn the skills — and then keep learning.”