These days, Maurice Rahming and Mark Matthews head up well-established, well-respected general contracting companies working on some of the biggest projects in the Portland metro area. But they haven’t forgotten what it was like a couple of decades ago when they were both starting out as first-time business owners.

That’s why Rahming, Matthews and the other leaders of a construction trade association called Professional Business Develop Group decided to open the organization’s new business development and training center in Southeast Portland.

Professional Business Development Group, also known as PBDG, was founded by minority and women leaders in Oregon’s building industry to help foster and grow the next generation of minority and women business owners. While many construction trade groups advocate for their members, PBDG takes its efforts to the next level, creating a community based on mentorship and support.

Rahming and Matthews aren’t just part of the founding group of the organization. They’re also often tapped by the small emerging businesses and minority-, women- and service-disabled veteran-owners who make up PBDG’s membership for help maneuvering what has become a complicated maze of business and industry rules, regulations and requirements.

Rahming and his wife, Ali O’Neill, for example, started their company in the attic of their home.

“We had the experience of knowing how to do the work out in the field, but really the whole business side of it was just a lesson of hard knocks,” Rahming said. “We just kind of figured it out.”

Small contractors these days don’t just have to figure out how to do estimating and payroll and other paperwork. They also need to be fluent in something that Rahming and his wife didn’t have to worry about 20 years ago – technology, which is rapidly changing the way work is done on a project site. Learning the ins and outs of myriad software programs isn’t the only tech challenge. There’s also the cost of software, which can run as much as $70,000 per year in subscriptions.

PBDG’s leaders have set up the training center to create a one-stop shop to help address all of those pressure points. In coming up with focuses for the classes and training sessions, PBDG’s leaders came up with what Rahming calls several different “buckets”: the financial side of running a business; human resources, including safety and employee retention; estimating and bidding; project management; design, which is something subcontractors are being increasingly expected to maintain; and business development, including creating a business plan.

“We said, what are things … that we would have loved to have had available when we were starting out,” Rahming said.

“Based on what we’ve been through, we’re trying to make it a lot more streamlined and easier for the ones coming up,” Matthews added.

While many construction trade groups advocate for their members, PBDG takes its efforts to the next level, creating a community based on mentorship and support.

The emphasis that PBDG places on creating community has carried over to the new center.

Rahming cleared out about a space of about 2,000 square feet on the second floor of the building on Southeast 27th Avenue that houses O’Neill Construction Group to create a place for the center. The furniture and plotters were provided by Portland Community College.

Rahming and other PBDG members pitched in money to create double-monitor computer stations, enough to allow the center to easily train a class of 16 people. The computers are all connected to a network that will allow instructors and attendees to collaborate and share information projects on several large screen monitors on the wall at the front of the room.

The space also includes a three-desk area where contractors can meet with instructors as well as a conference room for one-on-one mentoring sessions.

In addition, large general contractors, community banks, local insurance companies and PBDG members like Rahming and Matthews will serve as instructors for the training programs.

Another industry partner, Lease Crutcher Lewis, has signed on to co-teach a class in January with Matthews that will focus on health care projects. Matthews and his wife, Deb, own PacificMark Construction, which has developed an expertise in the health care sector. During the class Matthews will provide information about what smaller firms need to learn and know in order to win health care projects, while Lease Crutcher will provide tips about how to work with a large general contractor. Kiewit and Stacy and Witbeck also are expected to lead classes at the center in 2020, Matthews told Opportunity magazine.

The training center also has been able to work with software companies to obtain the latest construction industry software, which companies can come in and use for tasks such as estimating, reviewing contractors and refining designs – even when they aren’t taking a class. There’s also the added benefit of having Rahming, Matthews, Henry and other members of the association on hand at the center to provide guidance and advice.

“This a quiet place where you can get on a computer and … be able to do work as well,” Rahming said. “We’re not just giving the class and saying, ‘See you next month.’”

“The beautiful thing is that you have people here to help you, people who have been in the fire and have made all of the mistakes and are still being successful,” Henry added. 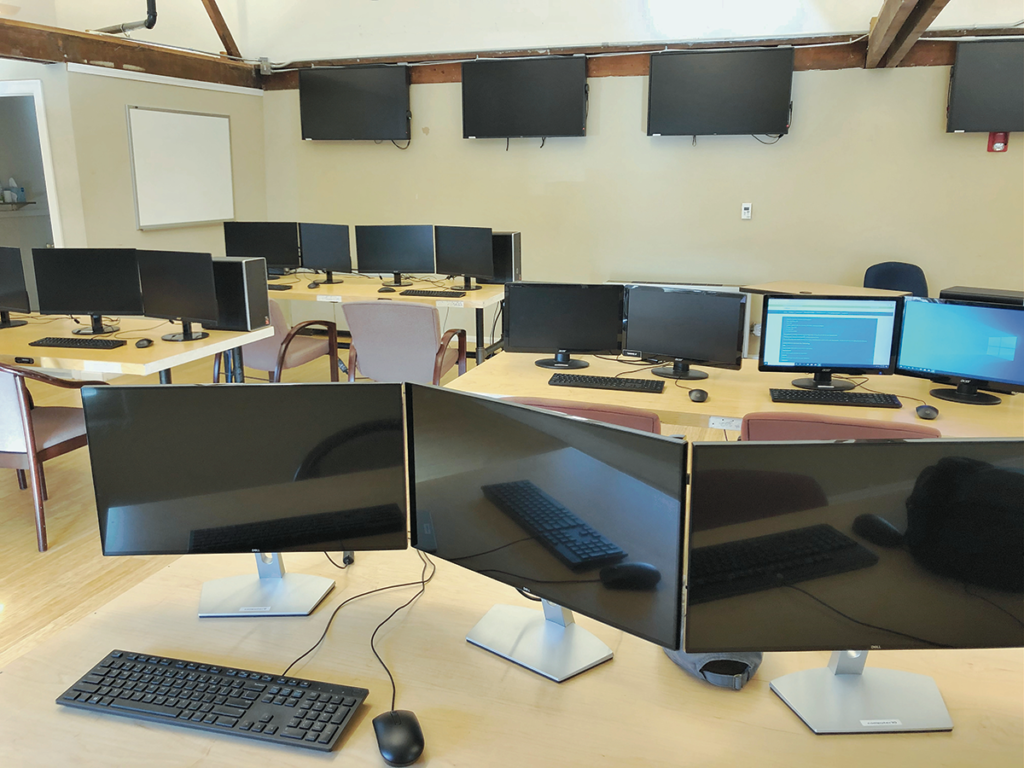 While construction training classes typically run several hundred dollars per person, the center’s rate of around $100 per class per company with no limit on the number of attendees is a deal that business owners like Nathaniel Hartley say can’t be beat.

While PBDG is an association with a membership, the organization has decided to make the center and the classes available to any firm that is registered with the state’s Certification Office of Business Inclusion and Diversity. The designation applies to emerging small businesses and minority-, women- and service-disabled veteran-owned businesses that meet certain criteria outlined by the state.

Also with an eye toward helping as many COBID-registered firms as possible, PBDG currently is offering a rate for classes that allows a business to pay one amount and then send as many employees as desired to the session. While construction training classes typically run several hundred dollars per person, the center’s rate of around $100 per class per company with no limit on the number of attendees is a deal that business owners like Nathaniel Hartley say can’t be beat.

Hartley, who owns Professional Lathe & Plaster and recently sent several of his employees to the estimating class, is quick to point out that the offerings at the new center aren’t just valuable for people starting new businesses.

Hartley has been in business since 2006. His company is taking on work with increasing scopes and responsibility, including running his largest crew ever for a contract at the Multnomah County Central Courthouse project. Through involvement with PBDG, Hartley says he’s been able to make solid choices about the best ways to grow his company.

“Everything I’ve learned from Mark and Maurice and (PBDG founder and member) Faye (Burch), they have brought me from infancy,” Hartley said. “And now I’m learning to ride a tricycle.”

Rahming and Matthews are quick to emphasize that the work they’re doing through PBDG and the new center is simply a matter of doing what’s needed to help establish the next generation of minority-, women- and service-disabled veteran-owned businesses in the local construction industry.

“The whole legacy of this thing is to carry it forward,” Matthews said.