At a time when there is a great deal of uncertainty for the Oregon small business community, it’s good to know there are still some things that can be counted upon. BESThq’s Business Expo West is one of those reliable business events that has managed to survive despite the toll the pandemic has taken on Oregon’s economy. In its 10th year, the event has earned a reputation for providing small business owners with access to valuable resources, inspiring presentations and top-notch networking opportunities.

This year’s Expo, which will be held from 10 am. to 2 p.m. on April 8, had originally been planned as a hybrid event, with attendees having a choice of attending via a livestream or visiting a building on Tektronix’s Beaverton campus. However, BESThq co-founder Ron White said he and his team are in the process of deciding whether to shift the Expo to an entirely virtual event to ensure the safety of all attendees. White said the BESThq crew is working hard to provide an event that will live up to attendees’ expectations no matter which approach is selected.

The theme for the Expo focuses on the “purpose” portion of BESThq’s quadruple bottom line approach that helps member businesses pursue profits while raising up people, protecting the planet, and supporting individual purpose.

“The byline I’m becoming fond of is, ‘We’re gonna get ‘er done in ‘21,’” White said. “For me personally, and for a lot of people, I think, this last year has brought a lot of clarity as we’ve seen the world around us brought into focus, whether we want it or not. Some businesses have done really well, and some have been pretty beat up, but for all of us, I think there has been some good clarity and some opportunity to identify our purpose.”

The list of event speakers is still being finalized, but White said he already has commitments from several individuals, including former Timbers soccer player Scott Thompson; Eloisa Miller, director of the Oregon Secretary of State Corporation Division; Herb Yamamoto, owner of CADD Connection and vice-chair of Oregon Association of Minority Entrepreneurs’ Board of Directors; and Bill Dolan, the founder and owner of Spirit Media, a Portland event production company.

“They’re going to share their perspectives on the quadruple bottom line and on being open for business,” White said.

The Expo also will feature 30 networking rooms that attendees will be able to “move” between. Each room will feature an opportunity for businesses to meet sponsors and talk with them and network with other attendees.

“It’s like walking up to a real table,” White said. “You’re going to be able to control your ‘walk’ through the Expo Zoom floor and be able to see who is in each room.”

This year’s event is free for virtual attendees, with costs to produce the event being covered by sponsors. Some of the money from sponsorships will also support the purposeful work and projects of four Oregon nonprofits: the Bybee Lakes Hope Center Victory Garden with VetRest, the Maupin Deschutes River Athletic Complex, the STEAM Pathways Center, and Portland Metro Community Resource Center.

Since the pandemic began, White and his team have become adept at hosting virtual events, including moving twice-monthly Executive Briefing events from an in-person venue to an online platform.

“We spent the summer figuring it out,” White said. “We basically had to become effective at event production.”

White and his team have been able to use the expertise they’ve developed to help other partners also hold successful virtual events. BESThq provided back-end support for the Oregon Association of Minority Entrepreneurs’ virtual trade show and awards presentations held this past fall and also helped a handful of nonprofits with virtual fundraisers.

“We’re not planning a shift into event production, but it’s been a nice service to be able to support and partner with organizations that are moving forward as best they can,” White said. “That part feels right; it fits with our purpose.” 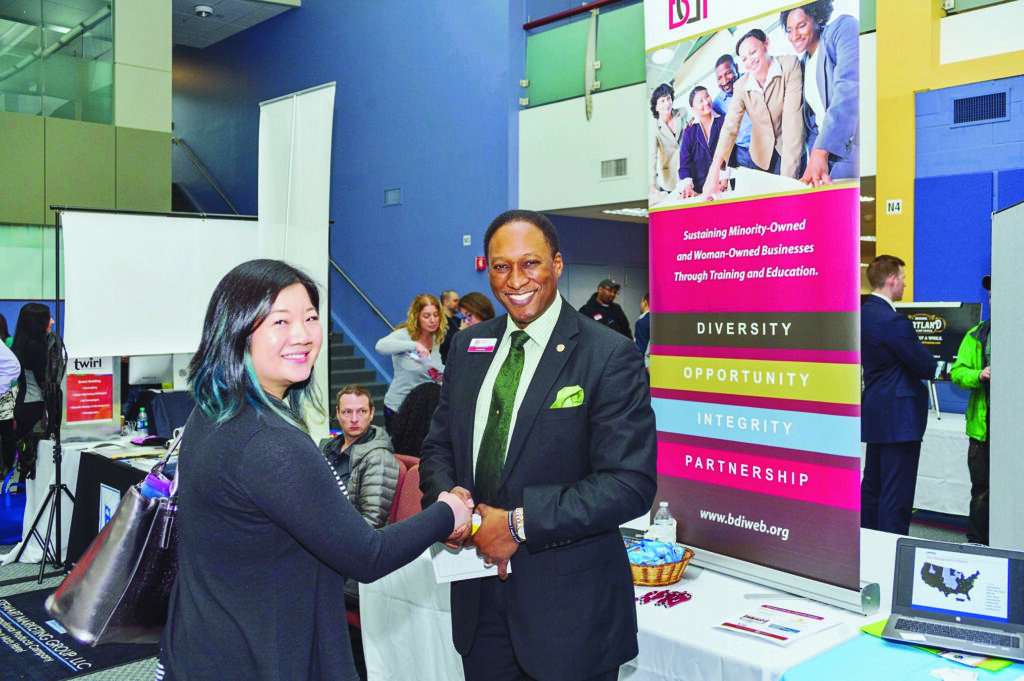 The agenda for the 10th annual Business Expo West event will feature 30 networking rooms and a roster of speakers who will discuss their experiences with the quadruple bottom line and being open for business during the pandemic. COURTESY: BESTHQ