SIMEON TERRY THINKS PORTLAND GETS IT. REALLY GETS IT

During a recent visit to Portland, Terry offered a no- holds-barred assessment of how the country is doing when it comes to inclusion and diversity, especially in the area of creating equal opportunities and access in the world of business.

His comments were offered during a luncheon program and awards event that wrapped up a series of educational workshops organized by the Building Diversity Institute as part of the 2018 Minority Enterprise Development Week.

The key to creating an environment where true inclusion exists rests in a basic concept, according to Terry.

“The collaboration I see across the board is what it’s all about,” he said “Other parts of the country, they don’t get it. They play the part. They write the checks. But at the end of the day … they don’t get it.

Providing those opportunities – the right kinds of opportunities – requires more than making assumptions, Terry said. Instead, it requires taking enough of a step back to enable people to see the real picture.

His company, Austin Commercial, is a large general contractor in the world of commercial construction. Despite continued efforts, the company kept missing its goals to diversify and improve inclusion in its subcontractor pool by between 2 percent and 3 percent.

The company looked at the subcontractors it was working with. The smaller diverse firms weren’t having problems paying employees the hourly wage required on Austin projects. They weren’t dealing with too much overhead.

“We drilled down,” Terry said.

The company finally found the answer when it looked at what smaller subcontractors were paying for materials versus what larger competitors were paying. Large companies have enough money to buy materials five or even six months ahead of time and store them until they’ll be needed for a job.

With that realization as the guide, Terry’s company approached suppliers and asked them to help small
diverse businesses with better pricing structures. They pitched it not as losing immediately money now, but as gaining new clients down the road. In the end, the suppliers agreed to the request.

Shifting how companies and governments view the creation and implementation of systems and processes to boost diversity and improve inclusivity requires an ability to change from focusing on immediate costs to thinking in terms of investment for the long run. Inclusivity, Terry said, is the result of a deliberate act, an investment in resources that offers benefits to everyone.

“When you’re diverse and inclusive, you get the best,” he said. “Those already at the table, you make them a little sharper.”

As in years past, Portland’s 2018 MED Week celebration also offered attendees an opportunity to attend educational sessions focused on professional and business development. This year’s event kicked off with a series of talks by three small-business owners and a networking reception. Events continued on a second day with a half-day diversity summit and a luncheon, where local businesses, programs and individuals were honored for outstanding industry efforts as well as their commitment to supporting local inclusion.

Vicki Nakashima, who served as emcee for the awards portion of the MED Week luncheon, can trace her involvement with equity and inclusion all the way back to the 1980s, when she served as civil rights manager for the Oregon Department of Transportation.

In those days, companies that wanted to become certified as minority- or women-owned had to go to three different organizations. Nakashima helped lead the effort to consolidate those multiple steps into a single-source program now evidenced in the current COBID process.

“We’re very proud 30 years later to look back, knowing that we have a single-stop certification that has worked,” Nakashima said.

CONSTRUCTION FIRM OF THE YEAR 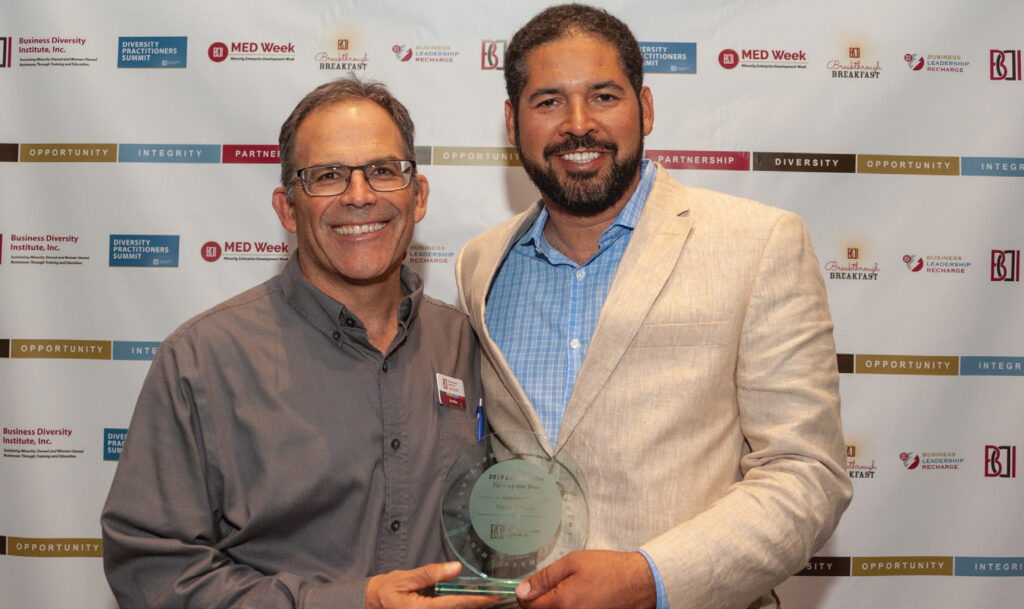 Joe Calderon started Sterling-Pacific Commercial Roofing and Waterproofing in 2015. The company specializes in major commercial projects, but also handles some residential work. Recent clients include the Port of Portland and Beaverton School District.

When Calderon isn’t busy running his company, he serves as a board member for Constructing Hope, which helps people enter the building industry. Earlier this year he was selected to participate in the Small Business Administration’s 2018 Emerging Leaders initiative as well as JE Dunn’s Contractor Business Development Program.

The secret to his company’s success isn’t a secret at all, Calderon says. He contributes it to the support he’s received from family, friends, colleagues, partners in the building industry and the local community. 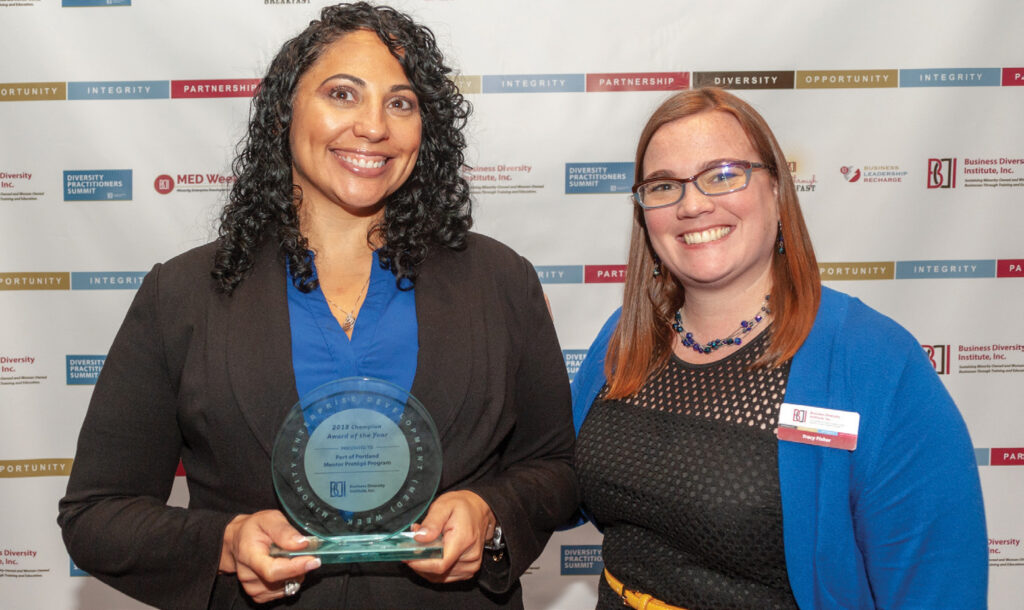 Since it was started in 1995, the Port of Portland’s Mentor Protégé Program has helped more than 100 small businesses build a strong foundation for success.

Each participant is paired up with two industry mentors, who help with the development of business and marketing strategies and setting short- and long-term business goals.

The program’s success in helping new diverse businesses tap the information and help they need to establish themselves and grow has spread beyond the Portland metro area.

The program has been replicated around the country and program leaders in 1998 were invited to participate in a regional panel that supported Vice President Al Gore’s Private Business Mentoring Initiative.

MINORITY BUSINESS
FIRM OF THE YEAR 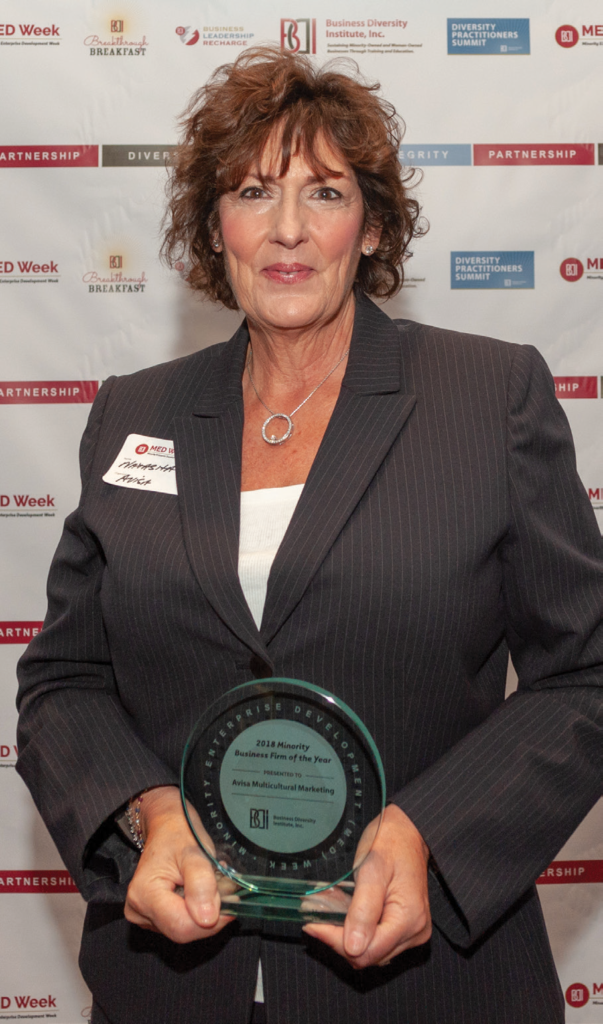 Avisa Multicultural Marketing LLC, owned by Natasha Holstein was the recipient of the Minority Business Firm of the Year award. The company focuses on helping clients reach Latino and multicultural markets.

Holstein, who was born in Cuba and raised in Jamaica, moved to Oregon in 1979 and opened her first business, a deli, two years later. In 1992, she started her own travel agency. Her marketing company’s roots can be traced back to Holstein’s entry into the media field in 2000, when she started working with a Spanish newspaper and became editor of a Spanish magazine. She also served as vice president of marketing, promotions and public relations at a radio station.

She eventually spun that experience into her own firm, Portland-based Avista Multicultural Marketing, which focuses on helping clients reach Latino and multi- cultural clients.

“Only in America can a Cuban immigrant come and have this much success,” Holstein said. 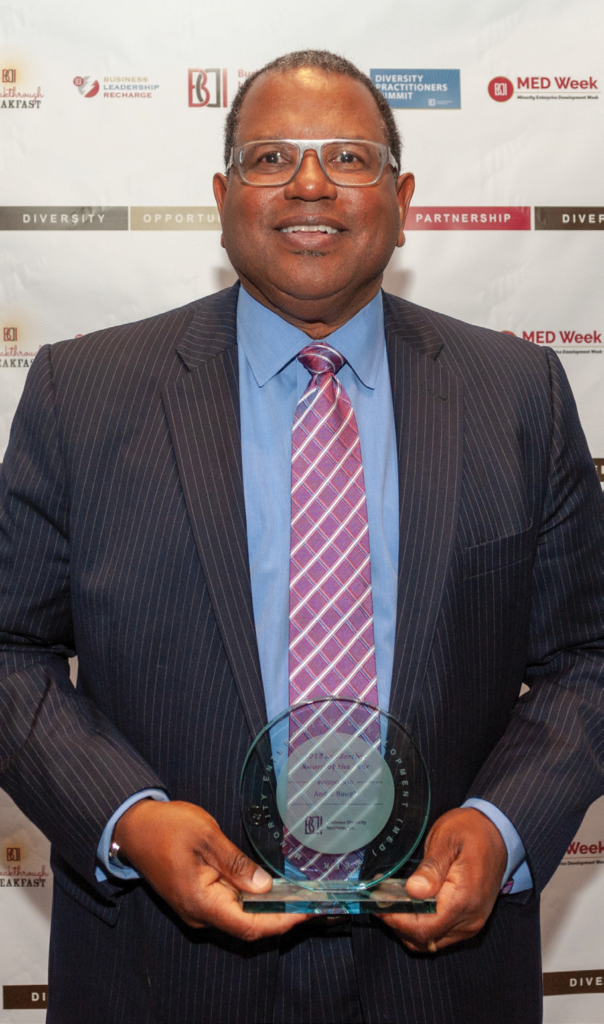 Andre Baugh has earned a reputation in the local business community and building industry for his ability to find innovative ways to create collaborative partnerships.

Baugh started his diversity management consulting firm, Group AGB, after spending six years as a project manager for the City of Portland. In addition to being involved in the Sellwood Bridge project, Baugh’s firm is involved in Multnomah County’s new courthouse and health department headquarters projects. 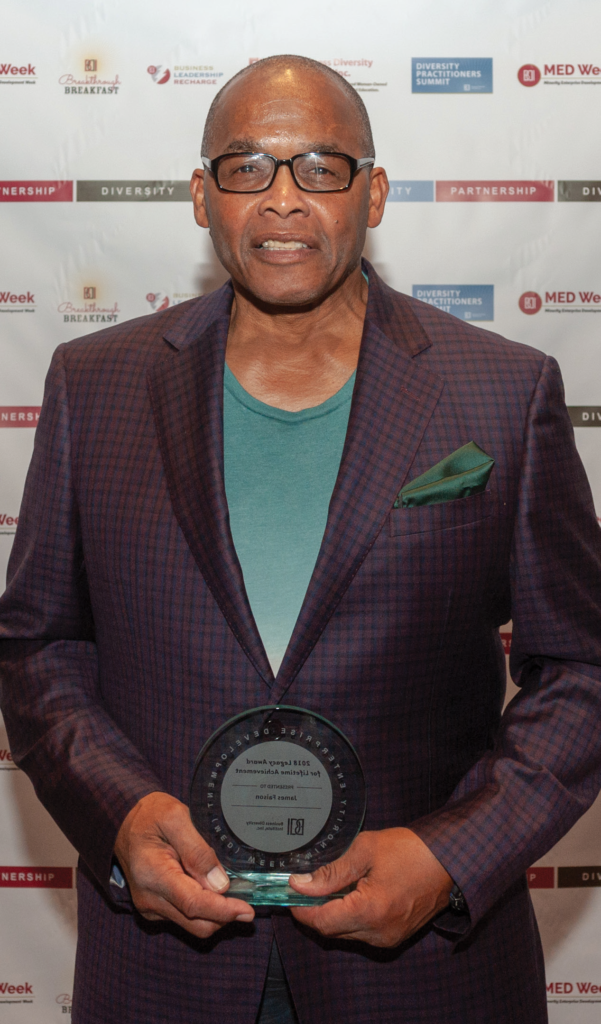 James Faison has built a reputation – and a business – in the local building industry that’s second to none. Along the way, he’s also served as a mentor and role model for minority business owners just starting out in the building industry.

Faison got his start in construction at the Port of Portland in the airport maintenance division work. He also bought, sold and remodeled houses, but decided to open his current company and focus on concrete work when the Great Recession hit. The move turned out to be the right one.

Faison Construction has gone on to work on some of the most notable projects in the Portland metro area, including Broadway Bridge Streetcar, the Sellwood Bridge and the Iowa Street Viaduct. Faison also recently won an industry award for his role as one of three contracting companies that successfully managed the completion of the Cully Park project.