Above Photo: Faith Odman has combined her passion for ceramics and entrepreneurship to create Kilnfolk, a ceramics and pottery-painting studio opening in the arts district in downtown Vancouver, Washington. PMG PHOTO: STEPHANIE BASALYGA

Over the years, Faith Odman toyed with the idea of trying to start a small business. She even kept a running list of possible ideas—but she never found the courage to take the step toward becoming a bona fide entrepreneur.

The pandemic changed all of that.

“It’s been a rough couple of years for everyone,” Odman told Opportunity magazine. “I guess I’ve had a perspective shift through the pandemic. You never know how much time you have left. Taking a chance is better than regretting it.”

Now, with support from several local small business programs, Odman is on her way to opening Kilnfolk. The ceramics and pottery-painting studio and gallery, located in the growing art district of downtown Vancouver in Washington state, will offer opportunities for people to walk in and paint a piece of ready-made pottery or take classes to learn more about making their own ceramics.

The business connects two of Odman’s passions—the desire to own her own business, and an interest in helping others tap a creativity they may not realize they possess.

“I grew up in a household that was not super artistic. We didn’t do a lot of crafts, so I never thought I was very artistic,” Odman says. “Then I took (a ceramics class). It wasn’t the traditional painting and drawing. I found I could do things creative. I’ve kind of been craving that experience ever since.” 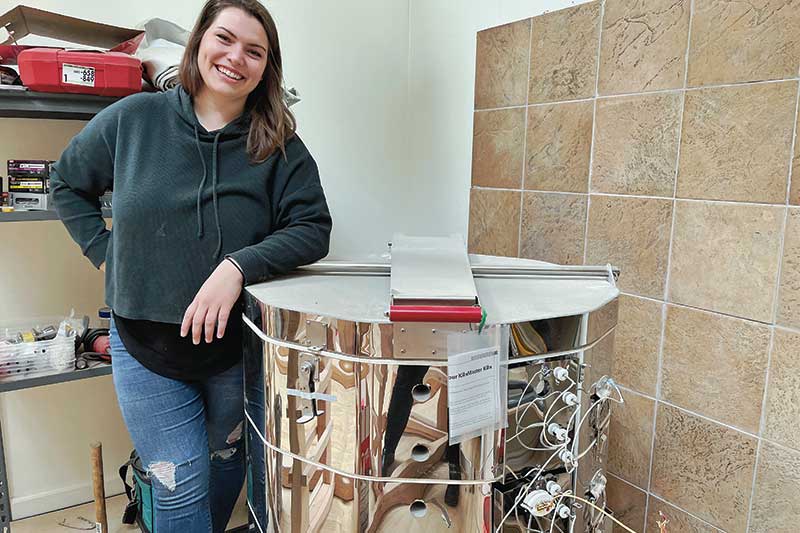 The first part of Odman’s current journey as a small business owner can be traced back to her time pursuing an undergraduate degree in business at George Fox University in Newberg. In addition to the classes required for her chosen degree, she signed up for classes in entrepreneurship.

After graduation, Odman accepted a job with a start-up that had offices in Kirkland, Washington and Buenos Aires, Argentina. As a liaison for the company, she traveled between both locations. It was an eye-opening experience, she says.

“That was my first experience working inside a new organization,” Odman says. “I got to see how much it costs to run a business, and all the different tools you use internally.”

Her husband’s job eventually took the couple to New Zealand and then to Washington state. Odman accepted a job with her husband’s company, which was still in the start-up stage. While her work in operations and strategy was interesting, she knew it wasn’t something she necessarily wanted for a long-term career. So, she started a running list on the side of possible ideas for starting a small business.

While she was living in Yakima, Odman had taken some ceramics classes. In addition to helping her realize she did have an artistic side, she found the creative work to also be therapeutic. By the time she and her husband finally settled in Vancouver in early 2020, though, Odman had been away from ceramics for a while—and she found she missed it. As the couple settled into their new city, she decided to step back into working in ceramics.

With the idea of building a studio at home and then taking some classes at local studios, she began to look for local opportunities. She came up with few options. The studios she found were mainly in Camas and Portland, and due to the pandemic, they had waiting lists for most of their classes. That’s when the idea of opening her own commercial studio took hold.

“I was looking into all sorts of businesses: water storage, rain water catches, all sorts of different things. But none of them stuck. With this one, I realized it’s finally the right time. There’s a demand. I enjoy this. I figured I’ll look into it and see how much it will cost.”

Odman contacted SCORE, the Small Business Administration program that provides entrepreneurs with access to former small business owners who are in retirement. Through SCORE, she was able to access a template that helped her develop some financial projections. Those numbers—along with the support from those who worked with her at SCORE—convinced her that her studio idea was viable.

“That really gave me the courage to move forward,” she says. 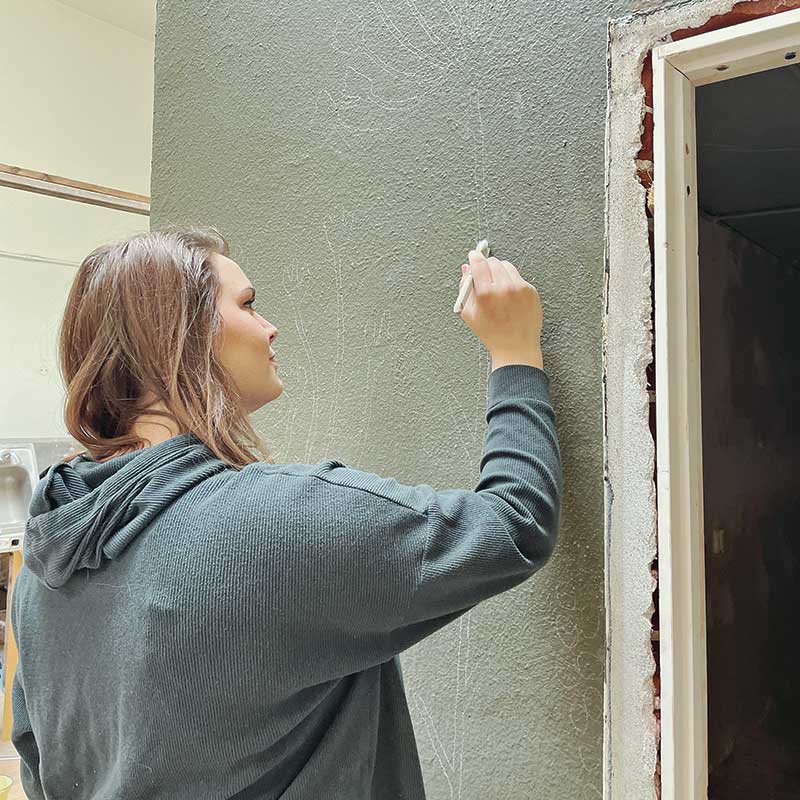 Faith Odman paints a design on a wall of Kilnfolk near an entry for what is slated to become a play area for kids while their parents take classes or paint pottery. PMG PHOTO: STEPHANIE BASALYGA 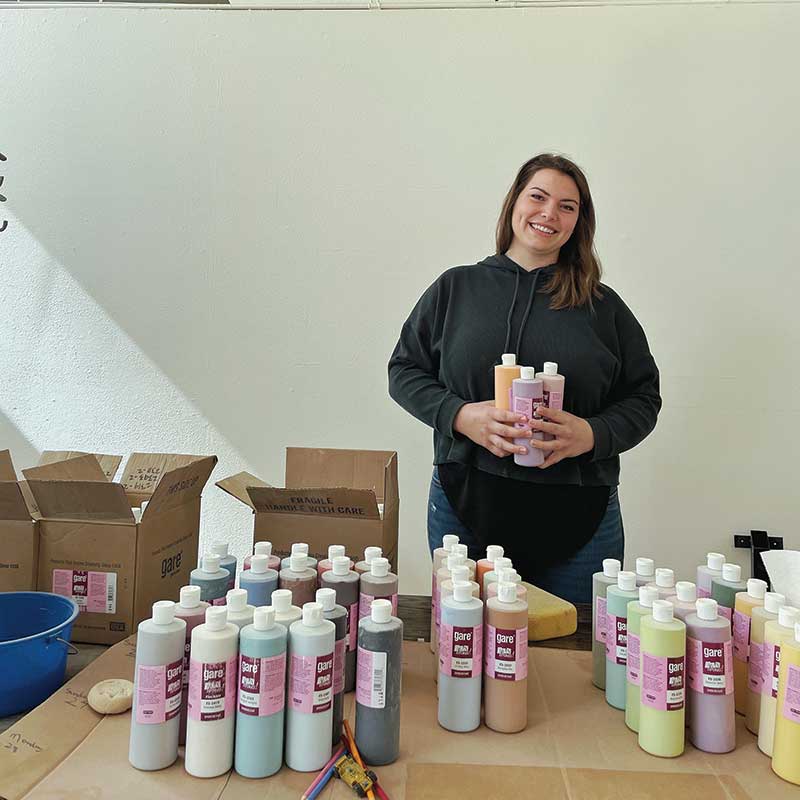 Faith Odman painted the mural that runs along a wall of her new pottery-painting and ceramics studio business in downtown Vancouver. PMG PHOTO: STEPHANIE BASALYGA

Having numbers in hand came in handy when Odman began looking for a brick-and-mortar location for her business. Because she was a new business owner, she knew she would need to arrive at the table with her projects and business plan in hand to show a prospective landlord that she was serious about making Kilnfolk a successful businesses.

Her original vision was focused on Vancouver’s uptown area. However, she found the prices more than she wanted to pay and realized she would be limited to working with a build-out team of contractors chosen by the building owner.

She decided to look instead in to Vancouver’s downtown area. That part of town has seen a resurgence in recent years, attracting young entrepreneurs who have helped established a district populated with unique retail boutiques, coffee shops and restaurants. She found a space that was such a strong fit for her vision for Kilnfolk that it seemed custom-made.

In addition to generous street-side windows, the space features large skylights that fill the space with soft, welcoming natural light and wooden floors. But some interior changes were needed. Odman, with help from her husband, has tackled a large part of the build-out—and she’s been able to select her own contractors to help with tasks such as laying flooring in a bathroom and turning a space that had served as a bank vault for a previous tenant into a children’s play space. In place of providing a portion of costs for tenant improvement, the building owner offered her three months of free rent. The arrangement provided Odman with time to prepare the studio to open as pandemic-related in-person restrictions on businesses were easing.

Odman’s studio adds to burgeoning section of businesses focused on the arts. Firehouse Glass, which offers opportunities to learn how to blow glass, is across the street from the Kilnfolk. A stained-glass studio, run by one of Odman’s friends, is just around the corner.

Odman’s ceramics and pottery-painting studio will offer something for everyone, from kid’s classes to “mindful” sessions where “yoga-meets-clay” to sessions specifically for seniors. Kilnfolk even has options for date nights for couples. The latter offers the added benefit of a Kid’s Club, where parents can drop off the kids ages five or younger and enjoy their clay-play time uninterrupted. Odman also plans on offering completed ceramic and pottery pieces for sale.

Odman has been so busy preparing the studio for opening day that she decided to hold off on officially launching the marketing plans she created. But even without sending out a regular newsletter or consistently posting on the social media platforms she set up, Kilnfolk is drawing a following.

Hand-lettered signs in paper-covered windows announcing the business, Odman says, have attracted interest. So has an initial website page with a place for people to sign up to receive information for a newsletter that already has a healthy subscriber list.

Odman also found herself with her first paying customer, even before the studio’s doors opened. As she was testing websites pages for classes, someone accessed a test page, signed up—and paid. The only problem—the class wasn’t ready to start. When Odman contacted the person, she was told to hold onto the money until the class was ready to launch.

As Odman prepares for the opening of Kilnfolk, she recommends that anyone thinking about starting a small business take the time to talk with small business programs in their area. In addition to accessing business development education and technical assistance to create building plans and financial projections, those organizations offer support beyond dollar signs and numbers.

Finding mentors was a big part of the benefit that Odman found when she began working with resources such as the Small Business Administration’s SCORE program and Micro Enterprise Services of Oregon, a Portland nonprofit that provides business development services and access to capital to entrepreneurs in Southwest Washington through an office in Vancouver.

“That support gave me to confidence to go forward,” Odman says.

“I think I could have done this a long time ago—even with my experience working with the start-ups. I just needed the courage to do something, to put my money where my mouth is and step out and do it.”