ABOVE PHOTO: Gaila Lusby, left, is the “Momma G“ of Momma G‘s Soup. In addition to a growing wholesale division, Lusby just opened a storefront location for her artisan soup business at the Rockwood Market Hall in Gresham.
PMG PHOTO: STEPHANIE BASALYGA

FROM BOOTH TO STOREFRONT LOCATION, GAILA LUSBY IS BUILDING A SMALL BUSINESS EMPIRE

When Gaila Lusby was two years old, she snuck out of the apartment where she lived with her mother on Burnside Street in Gresham’s Rockwood neighborhood. After crossing the busy street, she made her way to the Fred Meyer store near the apartment. Two hours later, Lusby’s frantic mother found her daughter at the store, happily eating ice cream with a stranger who had decided to look out for the child.

Approximately 50 years later, Lusby is back in her old neighborhood after recently opening a brick-and-mortar location for her small business, Momma G’s Soup, at the Rockwood Market Hall. The Market Hall is part of a multi-building development that has risen on the site formerly occupied by the same Fred Meyer where Lusby wandered as a toddler.

Her decision to make the Market Hall micro-space the first storefront location for the artisan soups and sandwiches — including gluten-free, vegetarian and vegan options — that make up the bulk of Momma G’s menu, was about more than just growing her business.

“I felt a connection,” Lusby said. 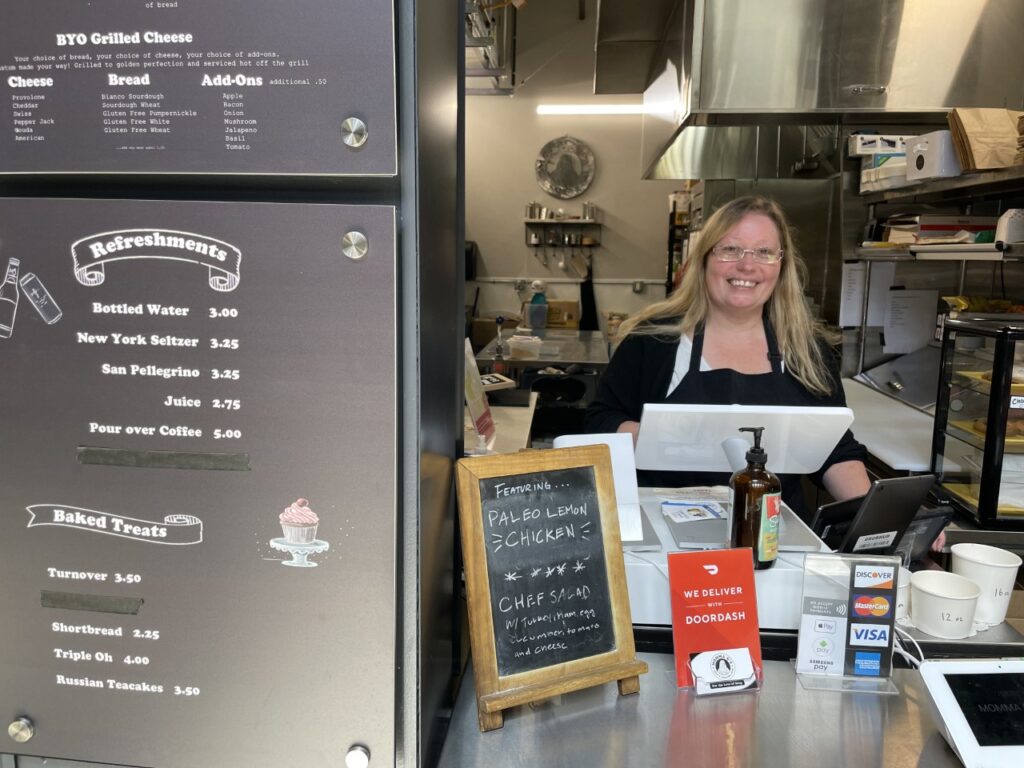 The location of the Market Hall isn’t the only connection that Momma G’s Soup has to Lusby’s past. More than a few aspects of the of the business have been influenced by time she spent as a girl with her mom cooking and baking in their kitchen. It was from her mother as well as her grandmother that Lusby learned the value of starting with a basic recipe and then turning it into her own.

Lusby likely also inherited her entrepreneurial bent from her mother, who used her culinary skills to start a small side business making a creation she called Critter Fritters. Lusby describes them as a casserole-like mixture that included rice or noodles, and was rolled in a tube like a burrito and deep fried.

“She would sell them to the bars,” Lusby recalls. “She would sit at the table making them over and over and over. I used to play restaurant in that same kitchen. My cousins would be my customers. I would write their orders on a little slips of paper and use my mom’s cutting board as my grill. I learned a lot from my mom about cooking.”

Lusby’s mother wanted to turn her Critter Fritters from a side business into the basis of a full-scale restaurant but she never was able to realize her entrepreneurial dream. As for Lusby, her involvement in the food industry and restaurants would be limited, at least initially, to roles such as waitressing and bartending.

As the first person in her family to graduate from high school, she received a full-ride scholarship to DeVry University in Arizona. She decided, however, to move instead to a small town in Washington for a short time before returning to Portland. During an abusive first marriage, Lusby worked various jobs in the food industry, including as a waitress, cook, hostess and bartender. She eventually left that marriage and met the man to whom she is now happily married. She also left the world of waitressing for an office job in dispatching.

Throughout those years, she had held onto her love of cooking. She honed her skills at soup-making, while raising her family. Her mother had earned a degree of fame — at least among relatives — for a soup recipe of her own. Every year, on the day after Thanksgiving, she would use leftover turkey to make African peanut soup.

“After my mother passed in 2008, my cousins came to me and said, ‘You know you’re responsible for making the African peanut soup now,” Lusby recalls. “I said, “I guess you’re right.’ So, I dug the recipe out.”

In addition to assuming the role with her family as the maker of the traditional soup, she also would make African peanut soup for friends as tribute to her mother’s memory.

“My friends would say, ‘You know, if you could bottle this stuff …’ It was a long-standing joke for a while,” she said.

Even so, Lusby occasionally talked with her husband about using her mother’s recipe along with the soups that Lusby had made for her family over the years as the basis for a restaurant, in part as a way to fulfill the dream her mother had never been able to realize.

“I dreamt about finally having the family business that my mom planned on having,” she said. “With her Fritter Critters, she was trying to be an independent entrepreneur doing what she loved and what she did best and that was cooking. She taught me that.”

While Lusby’s husband, Dean, was supportive of her dream to start a business, he wasn’t convinced a restaurant was the best approach. Lusby, however, wasn’t sure of any other way to turn her skills with soups into a business.

The answer came in 2016 when she and her husband were on their way to church. The couple saw a sign about the Mt. Hood Community College’s farmers market and Lusby’s husband said it might be a good opportunity to see if her idea for selling her homemade soups would fly.

Lusby decided to look into the possibility. By 2017, the couple had opened a booth at the farmers market selling made-on-site soups and sandwiches. They coaxed people with samples and put on a show that made them a popular booth at the market.

“We were Momma G and Sandwich Master D,” Lusby said. “We made it theatrical.”

By 2019, the business thriving. However, in 2020, the pandemic forced the farmer’s market to shut down. Seemingly overnight, Lusby found herself wondering if the business would be able to survive.

Lusby says she was literally curled up in a fetal position on the floor, convinced her business was finished, when a business advisor she was working with at Micro Enterprise Services of Oregon, which provides entrepreneurs with technical assistance and access to capital, called to check in on her. By the end of the conversation, which lasted several hours, Lusby had a new plan for her business.

“I had to assess and pivot. I had to rebuild my business around a wholesale model. Learning the difference between wholesale and retail was quite a culture shock,” she said. “I had to go to the (U.S. Food and Drug Administration) and re-license, and start thinking about things like labeling. I had to rewrite my recipes for the laws and to be consistent.”

She persevered, however, and was able to start peddling her soups to restaurants, cafes and stores in the Portland metro area. Lusby first found outlets for her soup at coffee shops in Troutdale and Fairview. Last year, with an introduction from a mentor she started working with, she added Zupan’s and Green Zebra as customers.

“Basically, that started becoming the backbone of our business,” she said.

That backbone continues to strengthen as Lusby prepares to add more customers. She says she tends to be conservative when it comes to projections, likening the process to “pulling fairies out of the air.” Still, she feels comfortable saying Momma G’s wholesale business is on track to double its year-over-year revenue. 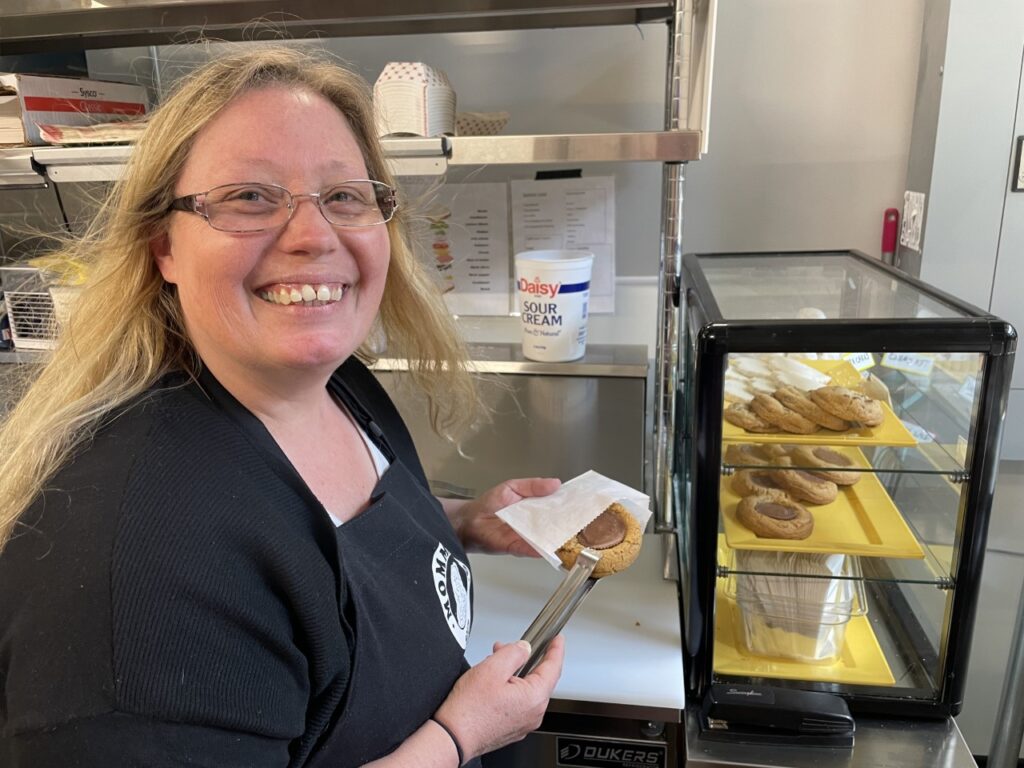 Moving into her first storefront retail space at Rockwood Market also required Lusby to assess and pivot yet again as she learned the ins and outs of working with contractors for the build-out of her space, and making sure she was aligned with the rules of the Market Hall.

When Lusby and her husband were selling soups and sandwiches at the farmers market, they regularly featured their three most popular soups: the African peanut soup, Hungarian mushroom and loaded potato. But Lusby also had 23 other soups in her repertoire. So, she would offer a different “soup du jour” each week. It’s an approach she’s maintained at her Rockwood location.

The storefront version of Momma G’s also offers a menu of sandwiches made exactly as her husband made them at the farmer’s market along with salads and gluten-free sweet treats — including shortbread, Russian tea cakes, and peanut butter cookies topped with peanut butter cups — that Lusby makes on-site.

Adding a brick-and-mortar retail location has Lusby changing how she handles her business operations.

“I’m running basically two businesses, and being a business owner and a marketer,” she said. “Now, I’m pivoting to delegate some of those things.”

Toward that goal, she recently hired her first employees and began working with a social media manager in a contractor capacity. Lusby sees the additions as important steps in growing her business.

“I was born to make soup and make people smile,” she said. “Other people in this world were born to do marketing better than me and I need to honor them for that because I want them to honor me for what I do best.”

Lusby also sees Momma G’s brick-and-mortar location as helping her fulfill another role she feels she’s meant to play. During her years working in the food industry she saw and experienced sexism, harassment and other inappropriate experiences.

She wants to change that.

“I want to create a safe, respectful and even playing field,” Lusby said. “A place where people can be inspired and figure out what they were born for.”