Skip to content
WHEN IT CAME TO TAKING A FINANCIAL LEAP OF FAITH, RESTAURATEUR ALICIA MIGNANO FOUND THE SUPPORT SHE NEEDED FROM A SMALL BUSINESS BANKER.

As Alicia Mignano watched the rents she was paying for her Los Gorditos restaurant locations in Portland climb, she realized buying her own building would be a smart move. But she didn’t think she could afford it.

Earlier this year, with encouragement and guidance from Nguyen, Mignano applied for, and received, a loan that allowed her to buy a small commercial building at 8319 S.E. Powell Blvd.

For Mignano, being able to own her own building now means she can direct and control the future growth of her business without worrying about being beholden to a landlord. But it also signifies something even bigger for her family – an accomplishment that she says is due in large part to the fact that she had the support of a long-time financial partner.

Even at an early age growing up in Portland, Mignano dreamed of owning her own business. She remembers scanning the classified ad pages of the local newspapers her parents delivered early every morning, looking for businesses and properties for sale.

“I always this idea that we should own our own business,” Mignano said. “But how do you make that happen when all you have is $2,000?”

The idea was still in the back of her mind when she sat down to figure out a capstone project for her senior year in high school. Many of her classmates were writing books or making CDs. Mignano, however, saw an opportunity to move forward with her dream of becoming a business owner.

When she was younger, she became a vegetarian and then a vegan. However, her mother wanted Mignano to eat meals along with the rest of the family. So, she began to experiment with ways to turn traditional rice, beans and salsa into versions that were vegan friendly. For her senior project, Mignano decided to pencil out a plan to start a restaurant offering Mexican fare that would include her mother’s vegan recipes.

She first thought about doing a fruit stand, but learned it would be cheaper – and easier – to open a food cart. So, she found a utility truck that she and her father could turn into a food truck and contacted the city to find out about permits. The more she learned, the more she realized that she and her family really could start their own food cart business offering her mother’s recipes.

About four months after she graduated from high school, using money she socked away from selling newspaper subscriptions and washing cars and babysitting, Mignano and her family opened Los Gorditos as a food cart on Southeast Division Street.

With her parents, Sara and Javier Cruz, and her brother, Javier Cruz Jr., involved in the venture, the business grew from a single cart and early daily sales of $300 to two carts. Mignano then expanded Los Gorditos by renting several brick-and-mortar locations. But as she watched the rents she paid for those buildings increase, she began to look for something she could buy. Even when she found the perfect location, though, she doubted she could make it pencil out.

That was when Nguyen threw out the suggestion that Mignano consider applying for a Small Business Administration loan to buy the building.

The two women first met about 10 years ago when Mignano went to open a personal account at Bank of America, where Nguyen was working at the time as a personal banker. Their paths continued to coincide as Mignano grew her businesses and Nguyen moved into roles as a vice president and small business banker at Bank of America.

When Mignano hesitated about taking the giant step of applying for a business loan, Nguyen was there to provide the same consistent support she’s steadily offered throughout the past decade.

“She calls me. She checks in on me,” Mignano said. “She’s also an immigrant, we have this really good connection. I had no idea this would be a possibility for me, for my family. But Phuong said, ‘Let’s try this and see if it works out.’ She’s the one who had the idea and did the paper work.

“I still remember the day she called me and said, ‘You got the loan,’” Mignano added. “To have someone … to share that with, someone who has been with me along the way, it’s been great. … I don’t think we would be (in this new building) if it weren’t for Phuong.” 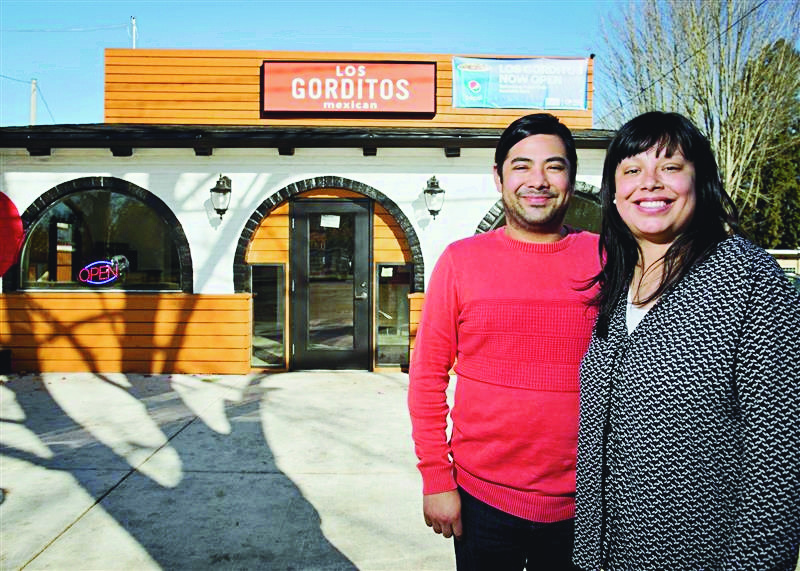 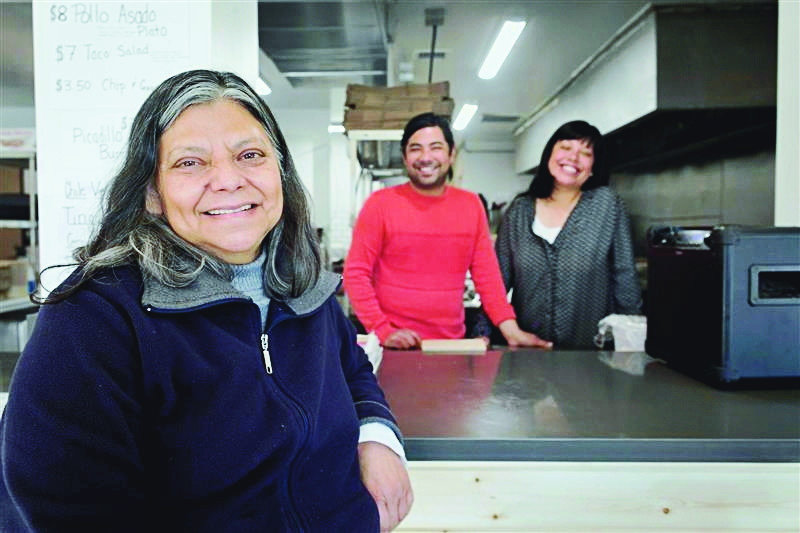 After Alicia Mignano, right, became a vegan as a teenager, Sara Cruz, left, created recipes for rice, beans and salsa that her daughter could eat. Those recipes have become a staple at Los Gorditos, a chain of restaurants that started as a high school project for Mignano.  PMG Photo: Jaime Valdez

The importance of establishing relationships with business owners as early as possible is something that a growing number of banks are started to hone in on, according to Cobi Lewis, director of corporate responsibility and a senior vice president with Umpqua Bank.

In the past, financial institutions in general tended to wait to cater to businesses until they were established enough to qualify for sizeable loans. Increasingly, however, they are realizing that relationship building and gaining trust need to start early in the timeline of a business.

Umpqua Bank, for example, recently offered a space in its Rockwood store in the Gresham area to Micro Enterprise Services of Oregon, or MESO. The nonprofit organization had spent more than a year establishing a presence in the community, providing mainly refugee and immigrant clients with small business development and financing support out of a building owned by the city of Gresham. The space was slated to undergo a full renovation as part of the Rockwood Rising development, which broke ground earlier his year.

Nita Shah, MESO’s executive director, went searching for temporary office space. However, when she found limited options in Rockwood, she worried her only option might be to rent several smaller spaces around the community. Then Umpqua Bank stepped forward with a rent-free solution.

At the end of this past July, MESO opened the doors to its temporary office in a portion of Umpqua’s Rockwood location at 10 N.E. 181st St.

Providing the space offered dual benefits. The arrangement allowed MESO, which has a main location on Martin Luther King Jr. Boulevard, to continue to serve a growing number of clients from a satellite location in Rockwood while also creating an important link between the nonprofit’s clients and Umpqua.

Many of MESO’s clients are uncomfortable with, or wary of, financial institutions, according to Shah. Some have had bad experiences in their home countries. Others feel overwhelmed by the formality of entering a bank.

“Our clients are more relationship-based,” Shah said. “Maybe they have had negative relationships with banks. They have not opened accounts before. They are embarrassed sometimes because they might have very little money to open an account. Plus, it’s very private financial information that you’re providing somebody. So many reasons.”

Finding ways to help establish and build trust are key. Even just being located in the Umpqua building allows MESO’s clients to walk around the bank, get to know the employees and build comfort levels that will help them eventually be able to work with Umpqua for their business banking needs, including accessing funding, according to Jennifer Johnson, store manager for Umpqua’s Rockwood branch.

“The whole impetus of it is we want people to be comfortable with bankers and realize they’re just people with information that can help you, so that when (you’re) ready to transition to a traditional banking relationship, it’s something familiar,” Johnson said. 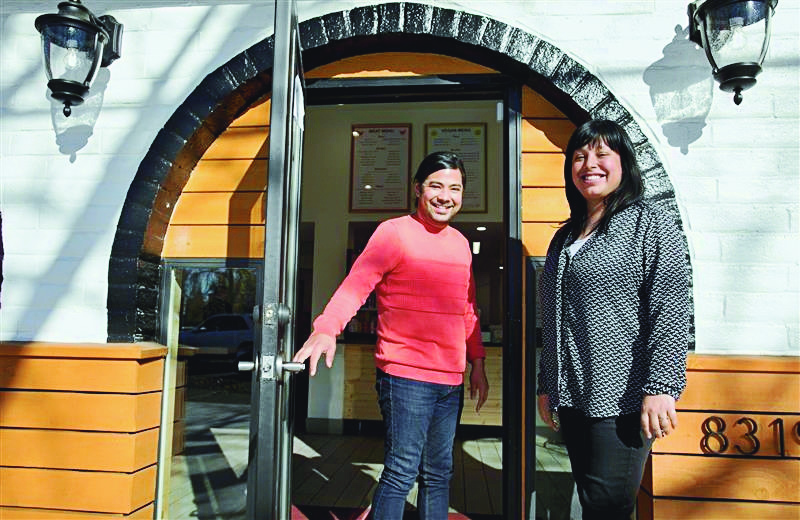 Patricio Pozos, a cook with Los Gorditos, cooks a tofu scramble at the restaurant in Southeast Portland. The building is the first that Alicia Mignano has purchased for her local restaurant chain. PMG Photo: Jaime Valdez

“This means a lot to us; this is the American (dream),” she said. “We just feel really blessed. We get to have roots. We get to have some equity, now.”– Alicia Mignano, owner, Los Gorditos 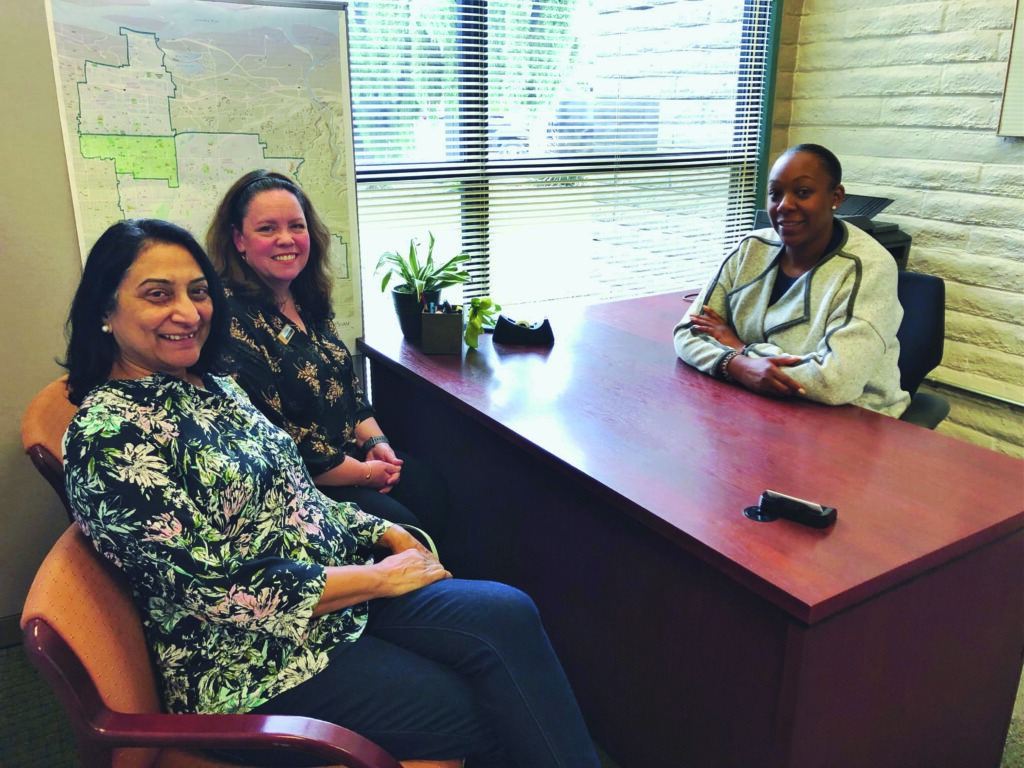 Nitah Shah, executive director of Micro Enterprises of Oregon, meets with Jennifer Lewis, manager of Umpqua Bank’s Rockwood branch and Cobi Lewis, Umpqua’s director of corporate responsibility, in a space that the bank has offered as a temporary home for MESO’s satellite office in the community. PMG Photo: Jaime Valdez 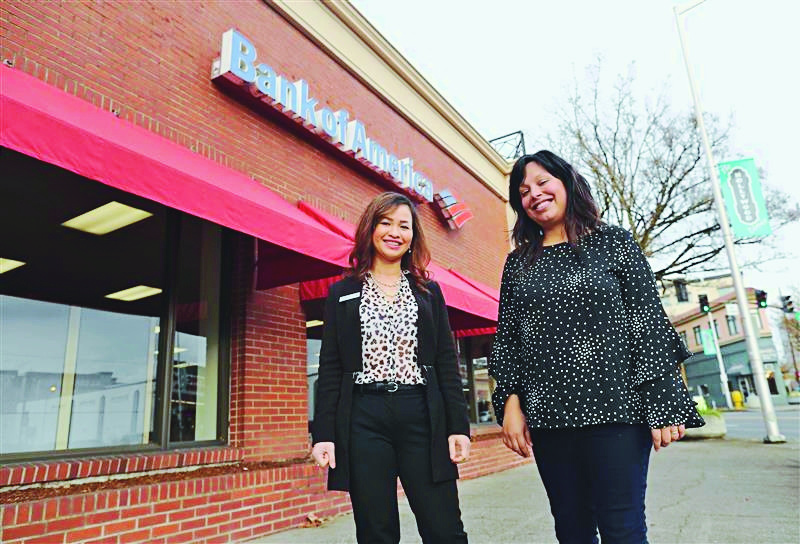 Alicia Mignano, right, owner of a small Portland restaurant chain called Los Gorditos, says the support of Phoung Nguyen, a vice president and small business banker at Bank of America who has worked with Mignano for more than 10 years, gave her the confidence to buy a building for one of her restaurants. PMG Photo: Jaime Valdez

The power of preparation

Even when a business does reach a size that the owner feels ready to approach a traditional bank for funding in the form of a loan, taking that step can be a bit intimidating or overwhelming. Alicia Mignano, for example, found the idea of taking out a hefty loan to buy the building for her restaurant overwhelming at first.
“(Every building on the market) was above $1 million. That’s a really scary number,” she said. “That’s a real big number.”

But being able to go to the table prepared helped bolster her courage to move forward.

“It was kind of intimidating. But at the same time, I was really excited because it’s a big challenge,” Mignano said.

That preparation can make the difference between success and failure for a business owner looking for a loan from a bank, Dominique L. Merriweather, a vice president of commercial lending for Riverview Community Bank told a group during the Black Business Summit held in Portland earlier this year.

During his presentation, Merriweather provided some steps business owners should take in order to boost their chances of having a business loan approved

For starters, business owners should sit down and assess their credit situations as well as have a solid grasp on the finances of their business. Keeping good records is another key step to take before seeking financing.

Merriweather also stressed that business owners consider the length of time they’ve been in business when deciding whether to pursue a loan, something Chris Fox, a senior vice president and Pacific Northwest small business region executive with Bank of America, also suggests. Fox recommends that businesses be established for at least two years before an owner approaches a bank for a loan.

“Two years is usually the entry point,” he said. “Usually, getting past the two-year mark is a sign that a business will be able to stick around.”

Merriweather and Fox also both recommended establishing relationships with bankers well before applying for a loan. Once that face-to-face communication with a business banker is made, Fox said, consider meeting every six months or so to keep the connection fresh. Building a strong ongoing relationship is a suggestion that Mignano echoes.

“Just try it. Be bold,” she said. “And find the person at a bank that you can have a relationship with. Find a bank you can work with and have a connection with.”