For the past 24 years, Portland area contactors and law enforcement officers have regularly joined forces through the Construction Industry Crime Prevention Program of the Pacific Northwest to protect construction sites from theft and vandalism.

On Feb. 18, they gathered together to honor a few of those outstanding partnerships and efforts.

The Construction Industry Crime Prevention Program of the Pacific Northwest (CICP) is a nonprofit that formed in 1996 as a way to bring construction companies and law enforcement officers together to work to reduce crime and vandalism on jobs sites throughout Oregon, especially in the Portland metro area.

The program has become known throughout the Portland metro area for the four-foot-by-four-foot bright yellow signs found on the outside of fences around Portland construction sites. Beneath a red hard hat on each sign is a number people can call to report any suspicious activity they see on or around a construction site, with rewards offered for information that leads to arrests or recoveries.

Operating on a membership basis, CICP connects its contractor members with resources to build plans to keep their construction sites secure and limit the potential for trespass and theft, including providing the distinctive fence signs.

But even with the best precautions, thefts and vandalism may occur. When that happens, CICP also is there for its members. The organization sends out alerts asking members to keep an eye out for stolen equipment or making them aware of criminal activity occurring in certain areas. The group also works with law enforcement officers to locate stolen equipment and hold criminals accountable all the way through the court system, from arrest to prosecution to incarceration

The program has more than proven its effectiveness. Since CICP began its work, it has helped recover $6.5 million of a total of $19 million in equipment stolen from construction sites and construction companies, according to Karen Blythe, CICP’s executive director.

Operating on a membership basis, CICP connects its contractor members with resources to build plans to keep their construction sites secure and limit the potential for trespass and theft, including providing the distinctive fence signs.

While the success of the CICP program hinges on the involvement of law enforcement officers, agencies and departments throughout the metro area, it also relies on support from industry partners, Blythe told the audience gathered at Multnomah Athletic Club for this year’s awards. With an eye toward recognizing partners that have gone above and beyond the average when it comes to working with CICP to support the program and its members, the organization created the Partnership Award.

This year, the Partnership Award was presented to United Rentals for helping store the program’s reward signs, delivering them to construction sites and then picking them up when projects are completed. The award was accepted by United Rental representatives Rylee Steward and Jake Flora.

CICP also presented three other awards during the luncheon.

Thomas “TJ” Hahn, a detective with the Tigard Police Department was presented with CICP’s Law Enforcement Partner Award, which each year goes to an officer, police department or unit, or agency that was instrument during the past 12 months in creating partnerships and collaboration between the organization’s members and law enforcement.

Hahn was selected for the Partnership Award for his ongoing, dedicated collaboration with CICP’s network to catch individuals committing construction crimes. Recently, for example, he worked with CICP to track down more than $50,000 worth of equipment stolen from one of the organization’s members. The recovery was assisted in part by Hahn providing CICP with a detailed breakdown of the stolen items that the organization was able to send out to its members as a bulletin.

Hahn also leveraged the organization’s system for sending out alerts to get help catching a suspect who had been creating purchase orders with local construction industry suppliers throughout the Portland metro area. The individual was generating the purchase orders on behalf of unsuspecting local contractors, with more than six such incidents reported.

Chuck Elam, an officer with the Portland Police Bureau, was presented with the Law Enforcement Award. The annual award recognizes law enforcement officers who work directly with CICP’s members and staff in the area of prevention as well as with recovery and arrest efforts when theft and vandalism do occur on construction sites.

Elam received the award for his efforts related to catching an individual who was breaking into construction sites, where he would then record himself climbing up on cranes. He later posted the resulting videos to YouTube. The individual’s actions weren’t just illegal, they were dangerous given that he was making the climbs without using any safety equipment. 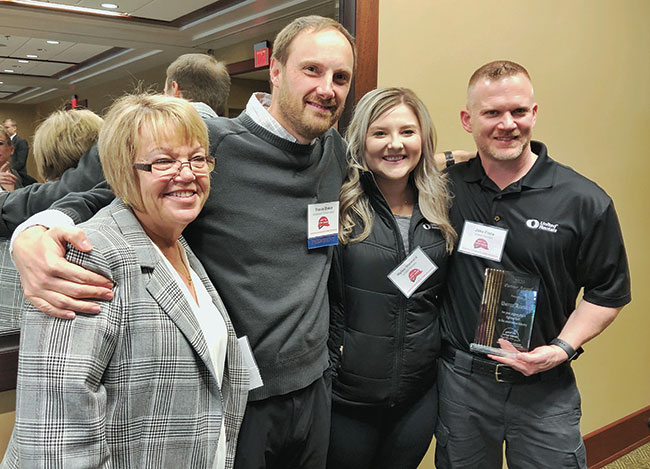 This year, the Partnership Award was presented to United Rentals for helping store the program’s reward signs, delivering them to construction sites and then picking them up when projects are completed.

Elam was instrumental in apprehending the individual, but the officer also took extra steps to put a stop to the crane climber’s dangerous activity. Elam monitored the jail census and then timed the arrest of the climber to occur at time when jail space was available to avoid any chance that the individual would be booked and released due to jail overcrowding.

“We applaud your timeliness in waiting for that jail opening,” Blythe told Elam as he stepped forward to receive his award.

CICP also regularly presents a Padlock Award to a CICP member, company or group that has shown courage, ingenuity or foresight in connection with preventing or stopping construction theft or vandalism, or helping recovery equipment. This year’s recipient, Mark Inkenbrandt with Fairfield Residential, exhibited all three.

In October of last year, a man with a mohawk stole items from a Fairfield Residential job site, making a clean escape. In a video, a vehicle was spotted nearby at the time.

A few days after the theft, Inkenbrandt was in his car when he spotted the vehicle, recognizing it from the video. He then spotted a man who matched the description of the person believed to have stolen the items.

Inkenbrandt slow-cruised by just to make sure. Convinced he had the right man, he called the police and then hunkered down to wait, keeping an eye on the vehicle and the individual until an officer arrived.

The officer apprehended the individual, but Inkenbrandt wasn’t finished with his role as an amateur detective. He convinced the man to reveal where the stolen items had been hidden. The suspect not only told Inkenbrandt and the officer the location, he led them to the actual spot.

“The three went and removed the equipment, before (the individual) being escorted to jail,” Blythe said.

While Blythe tends to serve CICP members from the background, she did receive accolades during the awards luncheon. During the event, Travis Baker of Andersen Construction, currently CICP’s chairman of the board, thanked Blythe for being with the organization since its founding. He also took the opportunity to formally introduce Jason Oliver, who will take over Blythe’s position once she retires later this year. The two are spending this year working in transition mode as Blythe works toward her retirement date. 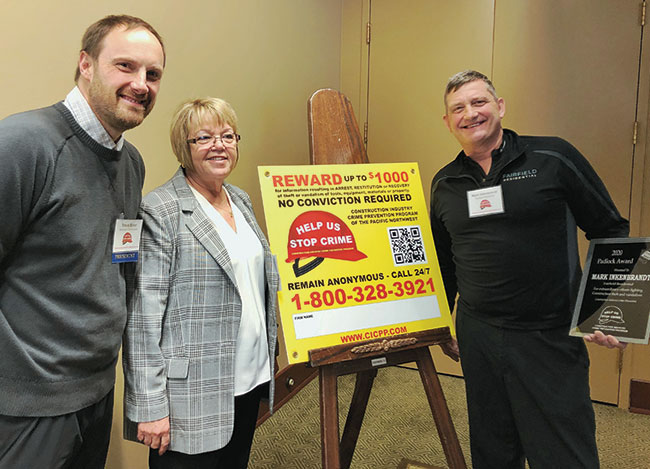 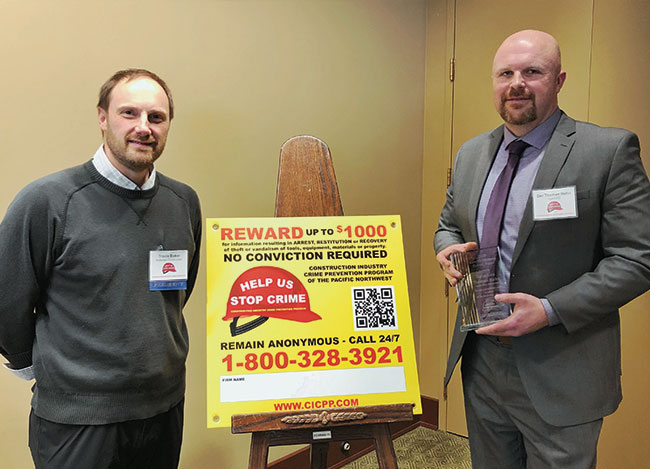 Presented to an officer, police department or unit, or agency that has been instrumental in creating a partnership between CICP members and law enforcement, and promoting collaboration in the prevention of crime in the construction industry.

Presented to an officer or to officers who have worked directly with CICP members and/or CICP staff to aid in prevention, recovery or arrest actions resulting from theft or vandalism on construction projects.

Presented to a CICP member, company or group that has demonstrated courage, ingenuity or foresight in the recovery of equipment or the prevention of theft or vandalism in the construction industry.

Recognizes a significant contribution, activity or partnership in support of the CICP program and its membership.