BESThq, a business community and incubator is gearing up for its annual Business Expo West event in Beaverton on April 2nd. This is the ninth consecutive year for the event, which offers a chance for small business owners to showcase their services and products, connect, and network. The event regularly attracts about 600 attendees and features about 100 business booths.

“It’s about good people coming together,” Ron White, co-founder of BESThq, told Opportunity magazine. “It takes a lot of effort and energy to put on the event, but we are getting some good support.”

One of those supporting partners is Tektronix, which has provided space on its Beaverton campus at a discount for the event for the past seven years, White said. That has allowed BESThq to keep general admission prices affordable at $20 per person.

White and his team also work to keep both space for business exhibitors affordable. While those spaces tend to fill up quickly, White encouraged interested businesses to contact BESThq to find out about availability.

The theme for this year’s expo focuses on the “purpose” portion of BESThq’s quadruple bottom line approach that helps member businesses pursue profits while raising up people, protecting the planet and supporting individual purpose.

“BESThq this year has evolved to really focus on the quadruple bottom line,” White said. “It’s the first thing on our website. It’s very clearly a vision of the organization. I think that’s a differentiator for us.”

While many events focus on triple bottom line approaches that encompass people, profits and planet, White believes that adding the fourth element of purpose helps set Expo West apart from other business expos.

BESThq started out in office space on Griffith Drive in Beaverton, where the first two Expo West events were held. The event grew in popularity even as BESThq moved to its current location on Beaverdam Road.

As its business community grew, BESThq began to embrace the quadruple bottom line. While the past few expos have highlighted different aspects of people, plant, profit and purpose, the organization is now incorporating that approach in every aspect of its operations and mission.

The organization also has adjusted in other ways this year. In the past, the organization has held two Tuesday Executive Briefings each month at its Beaverton location. Starting this past January, however, BESThq began hosting just one Beaverton briefing each month. The second briefing has been moved to the eastside, at the offices of Pamplin Media Group. which publishes Opportunity magazine.

Growing demand for BESThq’s services on the east side of the Portland metro area also led the organization to hold the inaugural Business Expo East at Camp Withycombe in Clackamas in November of last year. That event will be held again later this year, White said.

The organization also has adopted a subscription member model. The $10 per year cost provides businesses with access to the full range of services and resources that BESThq offers.

“It’s a highly efficient and affordable way for (business) people to connect with each other,” White said.

That’s why Rahming, Matthews and the other leaders of a construction trade association called Professional Business Develop Group decided to open the organization’s new business development and training center in Southeast Portland.

Professional Business Development Group, also known as PBDG, was founded by minority and women leaders in Oregon’s building industry to help foster and grow the next generation of minority and women business owners. While many construction trade groups advocate for their members, PBDG takes its efforts to the next level, creating a community based on mentorship and support.

Rahming and Matthews aren’t just part of the founding group of the organization. They’re also often tapped by the small emerging businesses and minority-, women- and service-disabled veteran-owners who make up PBDG’s membership for help maneuvering what has become a complicated maze of business and industry rules, regulations and requirements.

Rahming and his wife, Ali O’Neill, for example, started their company in the attic of their home.

“We had the experience of knowing how to do the work out in the field, but really the whole business side of it was just a lesson of hard knocks,” Rahming said. “We just kind of figured it out.”

Small contractors these days don’t just have to figure out how to do estimating and payroll and other paperwork. They also need to be fluent in something that Rahming and his wife didn’t have to worry about 20 years ago – technology, which is rapidly changing the way work is done on a project site. Learning the ins and outs of myriad software programs isn’t the only tech challenge. There’s also the cost of software, which can run as much as $70,000 per year in subscriptions.

PBDG’s leaders have set up the training center to create a one-stop shop to help address all of those pressure points. In coming up with focuses for the classes and training sessions, PBDG’s leaders came up with what Rahming calls several different “buckets”: the financial side of running a business; human resources, including safety and employee retention; estimating and bidding; project management; design, which is something subcontractors are being increasingly expected to maintain; and business development, including creating a business plan.

“We said, what are things … that we would have loved to have had available when we were starting out,” Rahming said.

“Based on what we’ve been through, we’re trying to make it a lot more streamlined and easier for the ones coming up,” Matthews added. 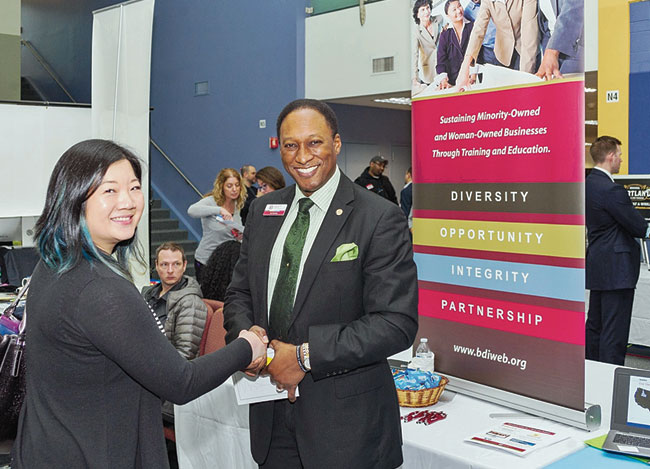 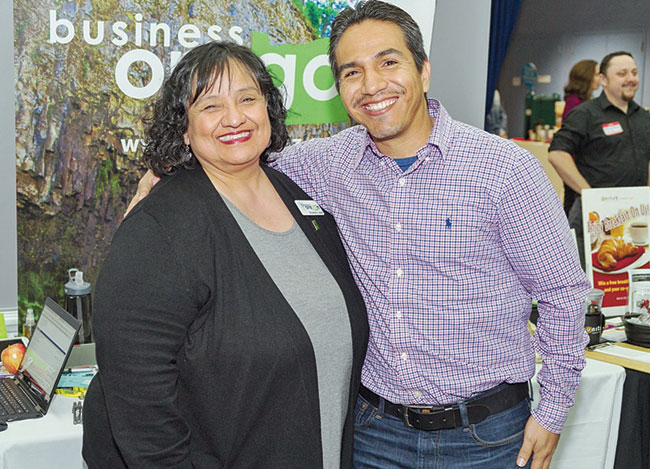 Now in its ninth year, Business Expo West draws 600 attendees and more than 100 business exhibitors annually. General admission to this year’s event, at the Tektronix campus in Beaverton, is $20 per person. Event organizer BESThq also is offering a $40 package that includes admission to both a morning keynote speaker breakfast and the afternoon expo.  PHOTOS Courtesy: BESThq