A unique mentor-protégé program offered by SafeBuild Alliance is providing a chance for small businesses to learn big safety lessons.

Joe Calderon knows his company’s role as contractor on a re-roofing project at the 22-story One Main Place in downtown Portland is the kind of project that, if handled successfully, can help a small company move to the next level.

So, Calderon wasn’t taking any chances when it came to creating the safest environment possible on the project site.

He tapped a unique mentor-protégé program offered by a trade group called the SafeBuild Alliance that brings to the table large contractors who serve as mentors to smaller firms, helping them learn new ways of improving safety on project sites.

SafeBuild Alliance’s goal is “zero incidents through collaboration” and it spreads that safety message through a membership approach that runs contrary to most safety groups focused on the construction industry.

“It’s pretty unique in that it isn’t driven by safety professionals,” Demetra Star, corporate safety manager at Fortis Construction, said. “It’s actually pulled together by project managers and owners of companies, and their focus is safety. So, you have the right people there talking about safety. And it’s a great way to interact with other contractors.

Fortis has been a member of the SafeBuild Alliance for about five years, Star said. Calderon’s firm, Sterling-Pacific Commercial Roofing & Waterproofing, became involved with the group after another contractor, JE Dunn, invited him to join.

When Calderon heard about SafeBuild Alliance’s mentor-protégé program, he immediately knew he wanted to be involved.

Safety is a big issue for any small construction firm with limited staff. But for a roofing company like Sterling-Pacific, it can be an especially big hurdle when it comes to buying insurance. When Calderon first called about insurance for Sterling-Pacific, the agent he talked to said there were three top industries that posed the biggest insurance risks. Coal mining and logging were the top two. Coming in a close third: roofing, the type of work that Sterling-Pacific specializes in.

“For me, becoming a part of a program that is based around safety, it’s important for us, it’s important if we are going do to business with (a general contractor), that they know we’ve done this,” Calderon said. 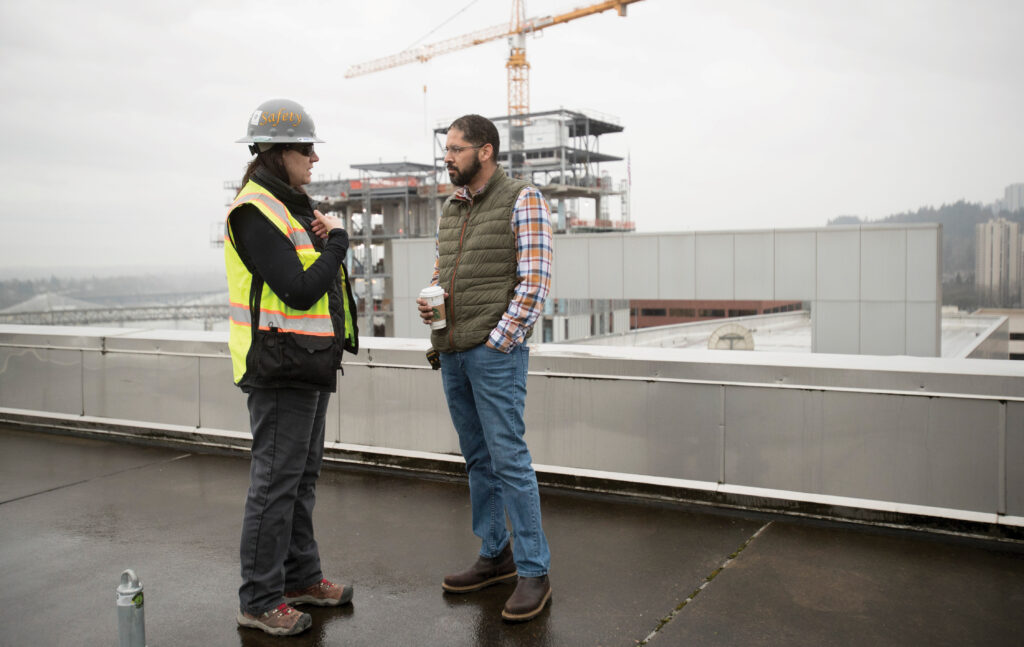 For the SafeBuild Alliance mentor-protégé program, Calderon was given the opportunity to select a contractor to work with. He already had partnered with several of the companies listed. He saw the program as a way to boost his firm’s safety savvy while also building a new relationship, so he bypassed firms he’d already worked with in favor of one he hadn’t had a chance to get to know – Fortis Construction.

The One Main Place re-roofing project, on which Sterling Pacific is serving as general contractor, offered the perfect opportunity for the two firms to kick off their mentor-protégé relationship.

“It’s a pretty sophisticated job,” Calderon said. “It’s downtown at (First Avenue and Main Street). It’s 22 stories in the air. There’s a lot of safety elements that revolved around the project.

Calderon and his crew had already set up some initial safety measures by the time he and his team did a site walk-through with the group from Fortis. The mentors found Sterling Pacific had done a solid job implementing basic safeguards, as well as putting a safety measure in place that the Fortis team was pleasantly surprised to learn about.

“They had already contracted to put up netting around the perimeter of the roof, just during the project,” Star said. “It’s pretty unusual to have a roofer show up ready to do that. So, it’s miles ahead of a lot of contractors.”

The Fortis team also made some suggestions, highlighting some areas of the project that had the potential to be problematic – red flags that Calderon said he and his team hadn’t considered before the walk-through with Fortis.

“We talked about their plans,” Star said, “and actually they were already ahead of the game with thinking about fall protection and falling objects. But we walked through what their means and methods were going to be. We talked about where the risk areas might be.”

One of those areas that Calderon and his team hadn’t considered, for example, was possibility of asbestos in the roofing materials they would be removing.

Another was keeping vehicular and pedestrian traffic that would be moving around the downtown building and a nearby parking garage out of harm’s way.

“That was discovered and talked about once we were on site,” Jeff Whitman, Sterling Pacific’s estimator, said. “We were aware of it, but watching the cars come in and out, (we realized there are) extra measures we have to take just to make sure people are aware before they come shooting out of the parking garage that there’s a chance we’ll be operating equipment. And instead of just one flagger, we’ll probably need two – one for the sidewalk and one for the parking garage entrance and exit.”

Follow-up meetings between Fortis and Sterling Pacific are focusing on helping Calderon and his leadership team build their company safety manual and continue to work on solidifying their company’s safety culture.

Through working with Fortis, Calderon has come to realize that handing employees a safety plan isn’t enough. Making sure employees follow  that plan requires that leaders of a company set an example for expectations.

“Everything is top down,” Lawrence, said. “If Joe doesn’t have the leaders of his company taking care of the program, then his people aren’t going to follow suit.”

That’s why when Calderon meets with the Fortis team for mentor-protégé sessions, he’s joined by two other Sterling-Pacific leads, project estimator Whitman and superintendent Sean Butt, who also serves as the company’s site safety officer and quality control manager.

For Calderon, having his top employees on board for creating a culture committed to safety at Sterling-Pacific and transmitting that to the company’s two field crew of about 20 people and its office staff of about 10 people is critical.

“We’re a young firm, so it’s the perfect time to develop a safety plan,” Calderon said. “You can have a (job hazard analysis) and a site plan for safety, but if it’s just that and it stops there and your guys aren’t in tune and it’s not part of the culture, it’s not going to go anywhere. It’s going to stop with the paperwork.”

Calderon’s strategy to build a new relationship that had the potential to lead to new opportunities appears to be paying off. The Fortis team is impressed with the steps Calderon and his team had already set in place as well as how quickly Sterling-Pacific has embraced – and implemented – suggestions from Fortis.

The experience Calderon and his team at Sterling-Pacific have gained will also likely benefit the company when working with other contractors. Coming to the table with a fully formed safety plan, including set-inplace procedures if an emergency situation should occur, will likely give Sterling-Pacific a foot up on other companies that are competing for the same job.

The benefits don’t just flow one way, though. Involvement with the program also may give Fortis an edge in a market  where contractors are struggling to find enough subcontractors for projects.

“The benefit for us is that we get new partners in a busy market and we continue to grow our subcontractor pool,” Blain Grover, a senior project manager with Fortis, said.

“There’s no boundaries in safety. If your subcontractors can raise the level of safety, it benefits everybody,” Fortis safety manager Star added. 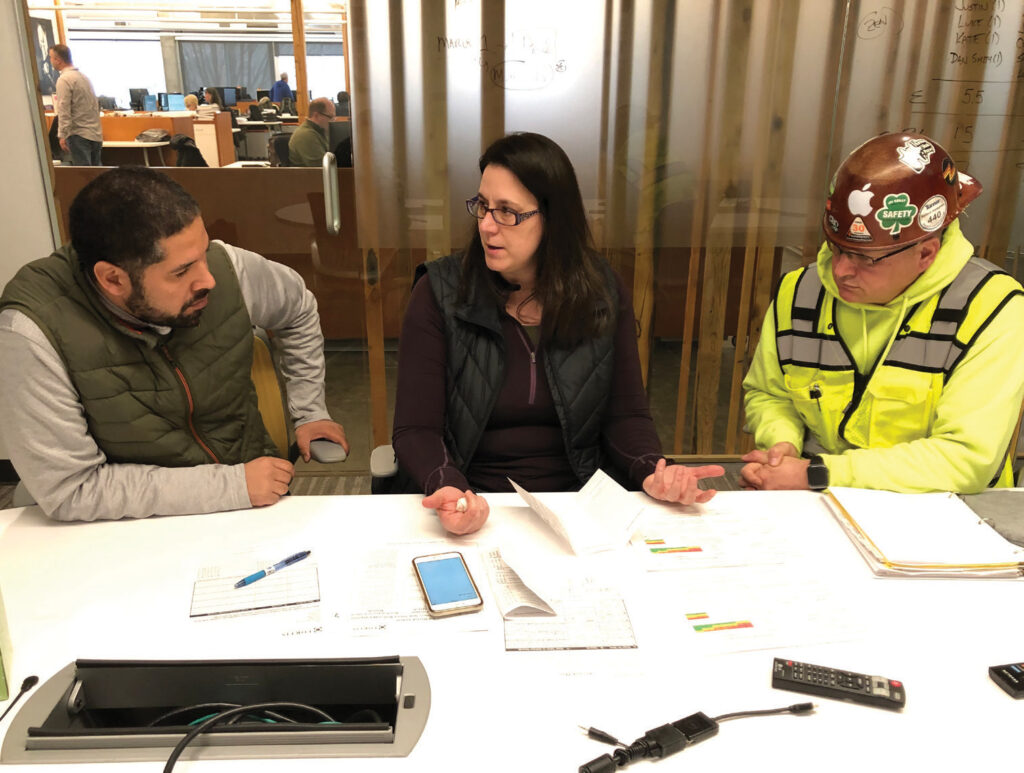