A downtown storefront in Beaverton might seem an unlikely spot for an architectural firm, but to Rick LaRosa, the space in a historic building on one of the city’s main thoroughfares where he opened his small architecture firm last year feels like coming home.

LaRosa moved to the Portland metro area about five years ago and worked for a few years with another architect in offices tucked away in a space at the Beaverton Round. Before that, however, he worked for a large architectural firm in Omaha. When that firm decided to open an office near Atlanta, they selected LaRosa to manage the 80-person operation. That office was located in a historic structure in a suburban area.

So when LaRosa saw the storefront space in the Cady Building, a 117-year-old structure located in Beaverton’s Historic Downtown District, he knew he’d found the perfect location for his architecture, engineering and planning firm, Axiotecture Design Collaborative.

“I might have a soft spot in my heart for these romantic old buildings,” LaRosa told Opportunity Magazine. 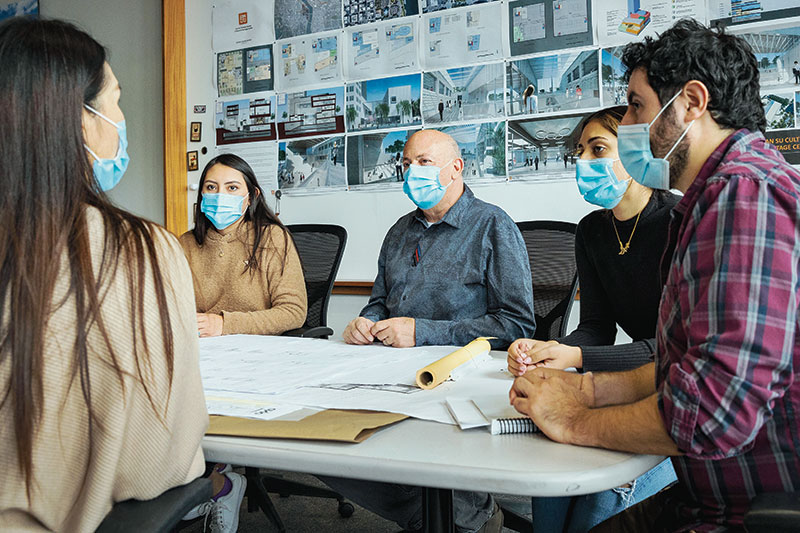 The space Axiotecture fills in the Cady Building came without the stylistic features usually found in the offices of a firm dedicated to design. Previous tenants in the space, such as a portrait studio, focused almost exclusively on retail.

To make the space suitable for a firm that offers planning, architecture, interior design, engineering and construction, LaRosa had to work from the ground up — literally.

“We really had to do everything from scratch: all the systems, all the flooring,” he said. “The bones are very solid, but it’s gone through lots of changes.”

The end result is a unique space that pays tribute to the classic feel of the building while still conveying a sense of modern, open space.

“We were happy to update the look and the image and colors,” LaRosa said.

With just six designers, one construction manager, and LaRosa, Axiotecture is small. However, it already has a long list of projects either on the boards or underway. In addition to a handful of projects in China and Tennessee, work that LaRosa connected with through his career network, there’s a mixed-use building in Tigard, a project in Portland near the Lan-Su Chinese Garden, and a church renovation in Salem.

Closer to home, there are renovation projects for two restaurants just around the corner from Axiotecture, in Beaverton’s Restaurant Row area, and an office for an attorney along Hall Boulevard. There’s also pro-bono work on a series of conceptual designs to create a multicultural center for Beaverton.

In the past year, the firm also has taken on a large number of residential projects. Some of that work is new construction, but most are renovation work — turning a spare room into a permanent office or revamping a basement into a living space for an elderly parent. While some of that work has come to the firm via referrals, LaRosa said the majority of the firm’s current 20 residential jobs result from the storefront location, which is on a route that experiences heavy foot and vehicular traffic.

“People drive by and see the number (on the window) and call the next day. Or they stop in.”

Even if people aren’t looking for an architect, they often stop by the firm’s windows to examine the array of items on the window ledge. For years, LaRosa was part of a barbershop quartet called FRED. In addition to recordings and videos, the singing group toured globally and won a major international competition in 1999. LaRosa used weekend trips as an opportunity to get up early and wander through flea markets and local shops, collecting an eclectic mix of art and knickknacks from his travels.

More than a few of those have found their way into the firm’s offices, filling a bookcase, shelving, and the front window ledges. One of the most popular items is a mop-haired dog made out of paper that more than a few passersby have stopped to examine. More often than not, LaRosa will stop what he’s doing to invite them inside to chat. That connection is one of the perks of having a storefront space where he can meet community members and share what his firm is working on.

“I didn’t realize when we got it that it would be a door opener,” LaRosa said.

The storefront location also has helped Axiotecture keep its diverse design team fully staffed. Architecture students and designers sometimes stop by with their resumes after spotting the architecture firm while passing by.

LaRosa’s commitment to creating a family atmosphere that respects a healthy life-work balance also means Axiotecture has bypassed the struggles that many design firms currently face when it comes to staffing. The firm’s space has a kitchen area, where LaRosa often cooks meals for the staff. In addition, team-building often focuses on activities such as fencing classes.

“We think we’re doing things right,” LaRosa said. “We have breaks and holidays; … we’re doing all sorts of things together. The word-of-mouth spreads, and people want to work here.”

He also points to efforts by the city to change Beaverton’s images. Some of those changes include the city’s efforts to highlight events that celebrate diversity, the development of Restaurant Row, and a food cart pod — all within walking distance of the Cady Building. Even the building itself has attracted a variety of retailers, including a plant shop, Ex Novo brewery and wood-fired pizzeria, and the vintage clothing boutique, The Vault.

“Beaverton is starting to hop,” LaRosa said. “It’s a pretty active place to be.”