FROM COLLEGE STUDENTS TO RETIREES, WOMEN LOOKING TO ENTER OR REJOIN THE WORKFORCE ARE FINDING WAYS TO PUT A BEST FOOT FORWARD

Since early 2020 when the pandemic began rocking the country’s economy, far more women than men have left the workforce. During the month of September alone, 617,00 women left the workforce, compared with 78,000 men. By this past January, the number of women in U.S. workplaces had dropped by 33% from the beginning of 2020.

Some of those 2.2 million women left as a result of furloughs or layoffs. Women — especially those of color — make up the largest portion of workers in the low-wage industries that the pandemic has hit the hardest. Other women were forced to give up jobs that couldn’t be done remotely to take care of children as schools and daycare providers closed their doors.

The disturbing trend hasn’t bypassed Oregon. For example, in January of this year, the state’s unemployment rate for men was 5.9%, while the rate for all women was 7.9%, with breakout employment rates for women of color running even higher.

Grayson Dempsey doesn’t have to study the numbers to understand the toll the pandemic has taken on women in the workplace. The interim executive director of Dress for Success Oregon hears the stories on a daily basis from the women who come to her organization seeking support and assistance to enter or rejoin the workforce, develop and strengthen their professional skills, and ultimately support themselves and their families.

At a mention of Dress for Success, most people immediately think about the nonprofit’s program that collects and distributes lightly used professional and casual attire to help women embark on careers and jobs with confidence. But Dempsey is quick to point out the organization is more than that. “I think people frequently think of us just as a clothes organization,” she told Opportunity magazine.

“Really, what is important for people to know is that we are a workforce development association.” 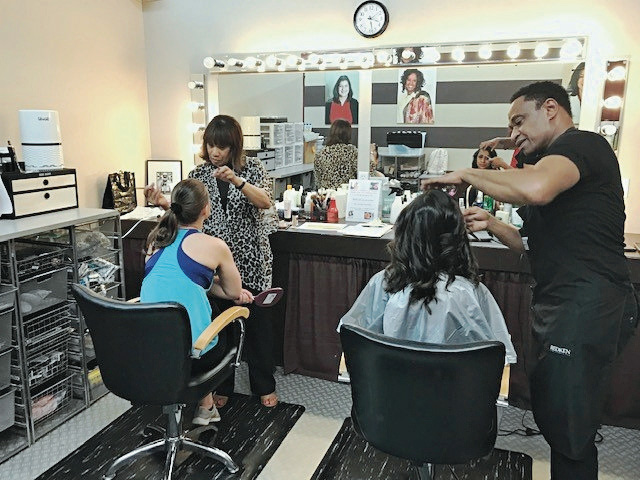 In addition to receiving assistance with job searches, updating resumes and brushing up on skills needed to succeeded in the 21st-century workplace, women referred to Dress for Success Oregon are “suited” from head to foot for interviews. Women are invited to select an outfit from an inventory of donated business attire and receive professional hair styles and make up. COURTESY: DRESS FOR SUCCESS OREGON

Dress for Success traces its roots back to 1996 when a young woman named Nancy Lubin was left a $5,000 inheritance from her great-grandfather. Lubin, a second-year law student at the time, decided she wanted to use the money to help others.

Working with three nuns, she learned that low-income women often faced challenges buying the clothes they needed to fill professional jobs. Before the year was out, Lubin and the nuns had formed Dress for Success and opened the organization’s first free clothing boutique in the basement of a church in Manhattan.

These days, the organization boasts 145 locations in 25 countries, more than 1.2 million women supported, and over 1,200 volunteers. The nonprofit also has expanded its programs and services beyond its original church basement boutique concept to fulfill its mission to provide women with resources, tools and support to pursue successful careers and achieve economic independence.

While Dress for Success Oregon is based in Portland, where it provides most of its services and programs, it also has a presence in Salem and Marion County, according to Dempsey. 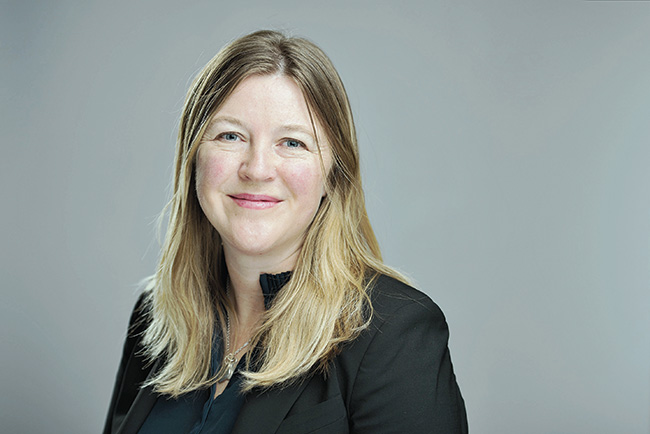 A NETWORK OF SUPPORT

Typically, the women who come to Dress for Success are referred by partner agencies and organizations such as state workforce offices, affordable housing programs, and domestic violence shelters, Dempsey said. The only requirement is that they be “work ready.”

Women referred to the organization move through a series of similar steps. At the Patricia Whiting Career Center, they receive help with job searches, creating or polishing resumes, practicing for interviews, obtaining new skills, or brushing up on existing ones to help them prepare for current market demands.

While women are responsible for setting up their interviews with prospective employers, Dress For Success helps them prepare in other ways. Each woman who obtains a job interview works with specialists at the organization to get “suited,” going through racks of donated, gently used professional wear to pick out an interview outfit, including shoes and accessories. Other in-house specialists provide them with professional hair styling and make-up.

“We guide them through the process of getting outfitted head-to-toe for an interview,” Dempsey said. Women who receive job offers from their interviews are then invited back to select more outfits suitable to where they’ll be working. They also are welcomed into the Dress for Success Help One Person Excel (HOPE) program. The program offers jobretention support to help newly employed women successfully navigate the first 90 days in the workplace.

Once women complete the HOPE program, they can join Dress for Success’ Professional Women’s Group, which provides ongoing support and resources to help women stay employed and continue to progress along their career path. 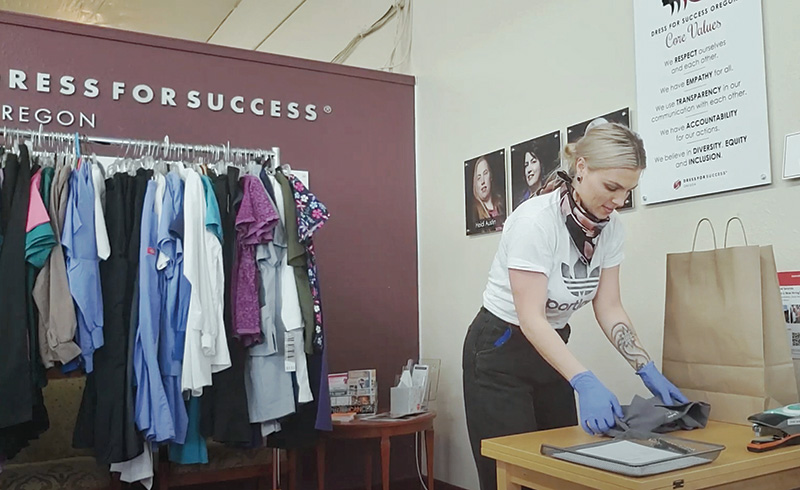 With the pandemic limiting in-person “suiting”; services for women preparing for interviews, Dress for Success Oregon has pivoted so that specialists can help clients select business attire via virtual meetings. COURTESY: DRESS FOR SUCCESS OREGON

According to Dempsey, one of the most popular programs during the pandemic has been the Fast Track program. The only program offered by Dress for Success that allows women to participate without being referred by an agency or affi liate, Fast Track is designed for any woman seeking employment, especially in new professions or industries. Participants in the program build technical job skills needed to succeed in the 21st-century workplace, freshen up resumes and cover letters, and brush up on interviewing skills.

The program also helps women look at how the skills and experience they’ve developed through previous jobs or life situations can translate to other industries and professions. Someone who has been a stay-at-home mom, for example, possesses skills and experiences that can be used to help develop a resume.

“We aren’t saying to women, “This is where we think you should go,’ but we are ready and available to share with women the changing trends in the workforce,” Dempsey said. “We help them think outside the box and understand what industry needs are.”

The women who have participated in Fast Track since the pandemic took hold have come from all walks of life.

“Women coming to us seeking employment grew 233% in the last couple of months of 2020,” Dempsey said. “We’re seeing a wide range, from college students to retirees. We know women are telling their friends, telling their colleagues. We almost can’t keep up with the number of women coming to see us.”

Dempsey’s organization also is seeing women come through the door who are dealing with unemployment for the fi rst time in their professional lives. For some who have had long and successful work histories, suddenly fi nding themselves out of work can be a blow to their sense of self-worth. “People who have been very self-sufficient in the past have never faced an experience like this. We work with them to give them the gift of confi dence,” Dempsey said. “But just coming to our program, we help them move forward with confidence.”

PIVOTING IN THE PANDEMIC

Like many nonprofits, Dress for Success Oregon has had to make some adjustments to continue to provide services during the pandemic.

Although physical locations in Portland and Salem have been closed, the organization still serves clients in both areas. However, they’ve had to cut back on the number of culturally focused groups they offer, including providing bilingual sessions.

The clothing program is still operating; however, the organization has shifted temporarily to having specialists work with clients through virtual meetings to make the process contactless. They’ve also added scrubs for health care workers and industry-appropriate clothing for women working in the trades.

The organization hasn’t been able to tap in-person help from its usual troop of volunteers. As a result, it has had to temporarily stop accepting personal clothing donations at any time. For the time being, the organization is holding occasional donation call-out events while also keeping its inventory full with corporate gifts from partner companies such as WILDFANG and Columbia Sportswear. Financial donations, however, are still being accepted, Dempsey said.

The organization also is holding virtual orientations for new volunteers. Although in-person activities are on temporary hold, tasks can be tackled remotely, from calling donors for financial contributions to teaching online classes and workshops.

Despite the challenges due to the pandemic, Dempsey sees some silver linings related to her organization’s pivots. Like many nonprofits, Dress for Success Oregon was forced to quickly shift its programs from in-person to virtual platforms as the pandemic prevented in-person interaction. Within a few weeks of the state issuing stayat- home and business closures last year, Dempsey’s organization had pivoted its services and is now offering all programs online.

The online programming means Dress for Success Oregon has reached women in a broader geographic region, which wasn’t always possible before the pandemic due to its limited staff. They’ve also been able to connect with women who previously might not have been able to come to physical locations due to barriers such as obtaining child care and accessing transportation.

“We’ve been able to help more people where they’re at,” Dempsey said.

Even with an optimistic mindset, though, Dempsey admits she can’t help but worry about the long-term effects the pandemic will have on women’s career paths. The troubling reality, she says, is that women traditionally have had a harder time than men when recovering from the loss of career progress and gaps in work resumes.

“A lot of jobs have been lost for good, and given the economic hit, I don’t know if women are going to be able to recover quickly from that,” Dempsey said. “The loss of experience and jobs, I do think it’s going to take years for women to get fully back to where they were. For women who have had to opt-out of the workforce due to family needs, gaps in resumes tend to raise employers’ eyebrows.”

However, Dempsey believes there’s also a chance for that outdated mindset of employers to change. She believes women-owned businesses can lead the way toward ensuring women who have been forced to leave the workforce can return without losing professional or financial ground.

“It’s important for women-owned businesses to support other women,” Dempsey said. “I think women supporting and lifting each other up will be very important going forward.” ■

What: The Celebrate Success Gala

Dress for Success Oregon will hold its annual Celebrate Success Gala as a virtual event on April 29. Now in its fifth year, the gala is the nonprofit’s largest fundraiser, allowing the organization to continue its work supporting women as they find and retain jobs, support their families, and establish economic stability.

Although an in-person event won’t be gala will feature the same celebratory air as in previous years, with highlights that will include an auction and raffle. The event also will feature the presentation of the 2021 Athena Awards.