When Charles Hannah and Michelle Lewis realized earlier this year they would have to shut down the brick-and-mortar version of their small business, Third Eye Books, Accessories & Gifts, the step didn’t feel like much of an opportunity. Rather than give up on their dreams, however, the couple decided to do what entrepreneurs do best. They dug in and leveraged the power of the pivot. Roughly six months later, Third Eye isn’t just surviving, it’s thriving as an online, e-commerce business. Hannah and Lewis, meanwhile, have learned more than a few lessons that they now are using to move their business carefully toward the future.

Third Eye’s earliest incarnation was as a home-based business that Lewis started as a way to sell a line of apparel called Natural Girls Rock through a cooperative economics opportunity offered by a group of Black female entrepreneurs. As sales took off, Lewis and her husband began talking about expanding their inventory to support their love of reading, especially Afro-Centric literature and history.

The couple eventually found a spot in a shared retail space in 2019 and set about creating a business where all would feel welcome. They especially wanted to nurture an environment where Black customers could visit and feel free to browse and thumb through books without feeling like they were under surveillance. The couple deliberately curated a mix of African-centric items, from books to apparel to jewelry, to speak to a wide range of ages and interests.

“It makes sense when the whole family can come in the store and get something,” Hannah said.

Although Lewis and Hannah still had to work full-time jobs to pay their bills, they entered 2020 with Third Eye holding its own. They had a feeling, however, that they might have to make a tough decision about the business. The pandemic forced the building where Third Eye was located to close. They also learned the owner of the building had decided to sell the property. Hannah and Lewis figured it was just a matter of time before a new owner would either increase their rent or decide to redevelop the property. “We saw the writing on the wall,” Hannah said.

He and Lewis finally decided to close down Third Eye as a brick-and-mortar business. But even as that window of opportunity closed for the couple, another opened when a business development specialist they work with at Micro Enterprise Services of Oregon, a Portland-area nonprofit that provides business education mentorship and lending for entrepreneurs, suggested they pivot their business to an e-commerce model. The suggestion would completely shift Third Eye’s business model and require Hannah and Lewis to step outside their comfort zones.

We (had been) doing zero online,” Hannah said. “It was all face-to-face.” Hannah and Lewis were still working their full-time jobs, but they were committed to keeping their small business dream alive and to making sure Portland didn’t lose another business with a mission to serve the city’s Black community. So, Hannah invested time learning how to design a website, creating inventory lists and setting up a platform to securely sell books online. He then began teaching Lewis what he had learned.

“I’m really proud of my husband,” Lewis said. “The online (part), Charles spent a lot of hours figuring that out. It was a lot of moving parts. E-commerce sites look easy until you start delving into them. And they get expensive as you get deeper into them.” One of the most critical parts of the pivoting process, however, was rooted in the real world. The couple was keeping the store inventory in their home. But with limited space, they knew they needed to find a better solution.

They both felt protecting the unique role Third Eye filled as the only Black-owned independent bookstore in the area that focused on books about African-centric history along with titles by Black authors was a priority. So, the couple decided to eliminate the apparel and jewelry and put their full efforts into promoting themselves as a bookstore.

They began using social media to promote their business, attracting some attention. Then George Floyd was killed by police officers in Minneapolis, sparking protests against police violence and racial injustice and fueling calls for greater attention for the Black Lives Matter movement’s work to promote equity. As more people began to seek out books about African American and Black history and literary works by Black authors, Third Eye began to attract attention. On May 29, Third Eye had zero online sales to its name. Ninety days later, Hannah and Lewis had filled 1,000 orders, all from Third Eye’s website. 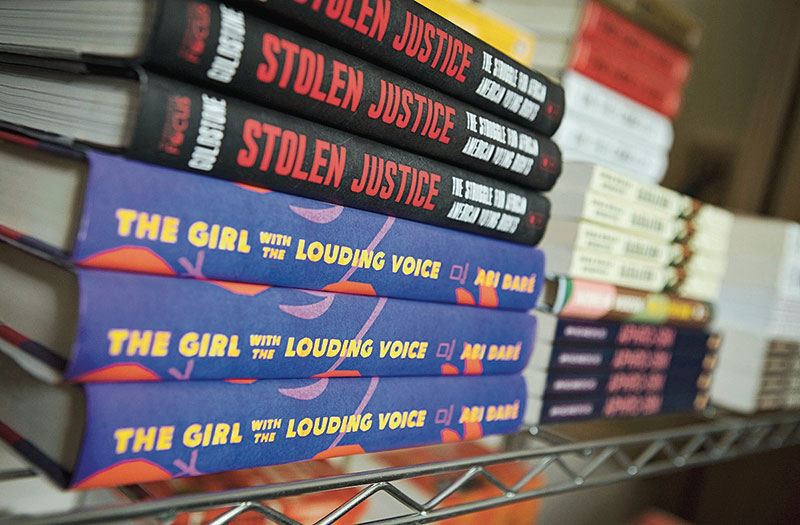 With an increased demand for books, Third Eye’s inventory now features as many as 25 copies of popular titles. PMG PHOTO: Jaime Valdez 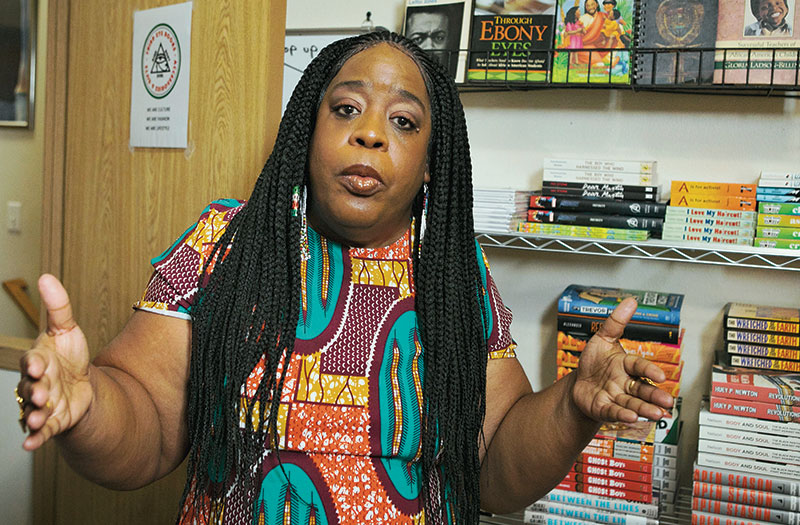 Third Eye co-owner Michelle Lewis stands in front of some of the bookshelves she and her husband and business partner, Charles Hannah, use to keep the bookstore’s growing inventory in order. PMG PHOTO: Jaime Valdez

FROM CHALLENGE TO OPPORTUNITY

While the pivot of Third Eye into the virtual word has been successful, it’s also introduced some real-world challenges. With an eye toward providing a wider selection of African-centric books and works by Black authors, including books for children, Hannah and Lewis began expanding the titles they carried while also increasing the number of copies of each book available. The books soon outpaced the room available in the couple’s living quarters.

In need of space they could use as a makeshift store, they rented a storage space and converted it into a walk-in store. They filled the space with shelves to make it easier to quickly locate specific books in what was becoming a growing inventory. Their selection of children’s books is “booming,” according to Hannah, as is a section devoted to books by local Black authors. They try to keep in stock at least 25 copies each of top selling books such as How to Be an Antiracist by Ibram X. Kendi, which has been ordered by more than 200 Third Eye customers.

As orders flowed in, Hannah and Lewis also quickly realized they needed to set up a system to allow them to work most efficiently. Although it’s still just the two of them filing orders in a part-time capacity, establishing a system has allowed them to ramp up to the point they are now able to fill most orders within 24 hours. That system also has allowed them to grow from individual orders that average around $48 to filling large orders from agencies and groups. Recently, for example, Third Eye provided books for more than 481 kids for a group order and has begun filling orders headed to the Oregon State Penitentiary.

Lewis and Hannah aren’t content to just coast on their current success, however. They continue to promote Third Eye on social media, with Instagram videos being especially impactful, according to Hannah. Their Zoom events with Black authors are growing in popularity. They’ve also caught the eye of other Portland businesses that have provided a platform for reaching new customers. Third Eye gained over a thousand Instagram followers, for example, after it was featured in a spotlight on the Powell’s social media platform. 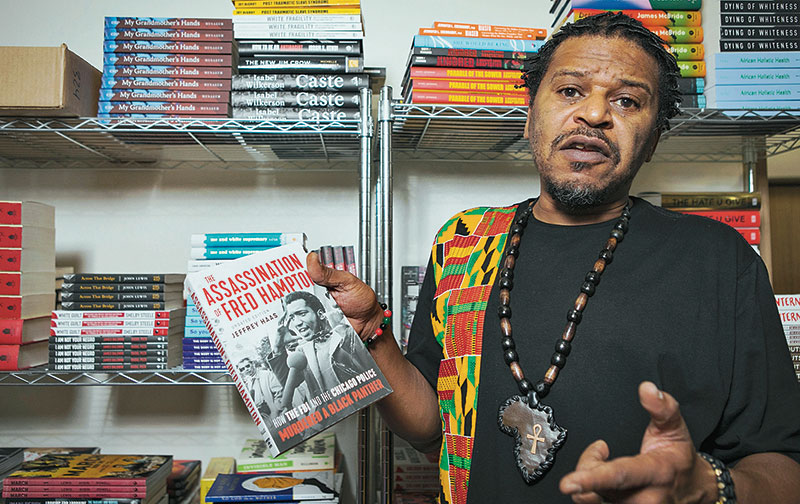 In order to pivot Third Eye to online sales, co-owner Charles Hannah learned how to set up an e-commerce platform for the business.
PMG PHOTO: Jaime Valdez

They also have participated in pop-up events, including one in McMinnville that focused on Black-owned small businesses.

“It was a really good response,” Hannah said. “We got a lot of sales from that one.” Hannah and Lewis are looking toward next year with an optimistic but cautious eye. The plan calls for a return to a brick-and-mortar storefront.

“We’re seeing a light at the end of the tunnel,” Hannah said. “We see the potential for this to get bigger.”

Right now, Third Eye has the Pacific Northwest market largely to itself as an independent bookstore that specializes in African-centric and Black-authored books. Hannah and Lewis realize, however, that as the bookstore becomes more widely known, competition will likely pop up. It’s something they’re actually looking forward to seeing.

Even when that competition finally arrives, Lewis and Hannah are confident Third Eye will continue to thrive through support from their customers and the new lessons they’ve learned during the past six months as both business partners and partners in life. “What’s really surprising is how close Michelle and I have become, how much this has helped our relationship,” Hannah said. “It showed us we can do things together. I had to learn to listen a lot more. I’m a fast-idea person. My wife says, ‘No, let’s sit back and look at that.’ We’re learning from each other’s strengths and weaknesses. We’re finding a good balance.” To browse Third’s Eye’s inventory of books, visit https://thirdeyebag.com