For Chris Bailey, food is deeply rooted in community. It’s one of the reasons he started Pozole to the People – to share the traditional hominy-based Mexican stew he loved with a wider audience.

“It’s something I grew up with,” said Bailey. “My father’s from the Southwest. It was a vital dish of his community, and I happened to grow up with it in Hawaii. It always represented family and community.”

In addition to starting two packaged food businesses, Pozole to the People and Bloom Caramel, Bailey now works as a micro enterprise developer, helping advise other entrepreneurs at Portland Mercado.

The same community of shared food is at the heart of Portland Mercado, a food incubator, public market, food cart pod and commissary kitchen all rolled together. In the summer, the patio is a gathering place filled with people and lively music.

Four years ago, while Portland Mercado was still being built, Bailey’s idea for his own food enterprise was just taking shape. To learn about the world of commercial food business, he turned to the Getting Your Recipe to Market course, a 14-week intensive program offered twice yearly through Portland Community College’s Small Business Development Center.

“When I came to Portland, I had this abundance of resources,” Bailey said. “But it’s also kind of that tragedy of choice. It’s intimidating because there’s a lot out there, so Getting Your Recipe to Market was vital in just helping to draw the clearest flight plan.”

Jill Beaman, instructor for the Getting Your Recipe to Market course, knows that creating a successful commercial food product takes more than just a tasty recipe. Beaman has helped countless entrepreneurs turn their handed down family recipes and home kitchen experiments into commercial-ready prototypes.

In partnership with New Seasons Market and the Food Innovation Center at Oregon State University, the class aims to give entrepreneurs who already have a recipe the practical building blocks to create a commercial product, from food business law and trademarks to packaging and costing.

“We bring in retailers, and we bring in farmers market managers,” Beaman said. “We talk about alternative sales. We inundate them with information so that at the end of the program they can present their product to a buyer with as much information as they have on costing it and packaging it and everything.”

One of the challenges food entrepreneurs face is figuring out how to produce a product that still tastes homemade but is cost-effective to produce at a commercial level.

“We go over costing a lot because, no matter how great their product is, it’s really hard to sell a twenty-dollar jar of salsa,” Beaman said.

“It’s either just not going to be the same product, or it’s going to be so expensive that it’s not feasible,” Beaman said. “There’s a reason why something’s homemade and wonderful because it really doesn’t always translate to a commercial product.”

Getting the recipe just right is where the Food Innovation Center (FIC) comes in. Sarah Masoni, director of the product development and process program at the FIC, first developed the course in an effort to institutionalize the information she kept telling people over and over.

The FIC talks to students about what kind of testing they need to have conducted on their products and what qualifications they need to meet. In the FIC lab, they can test food products for pH and water activity.

Masoni also talks to entrepreneurs about using  commercially available ingredients, so their products are scalable. For instance, in barbecue recipes she talks with entrepreneurs about the importance of coming up with their own ketchup base. “So, instead of having, say, Heinz ketchup on your label,” Masoni tells them, “you would actually have tomato paste, vinegar, brown sugar and spices.” 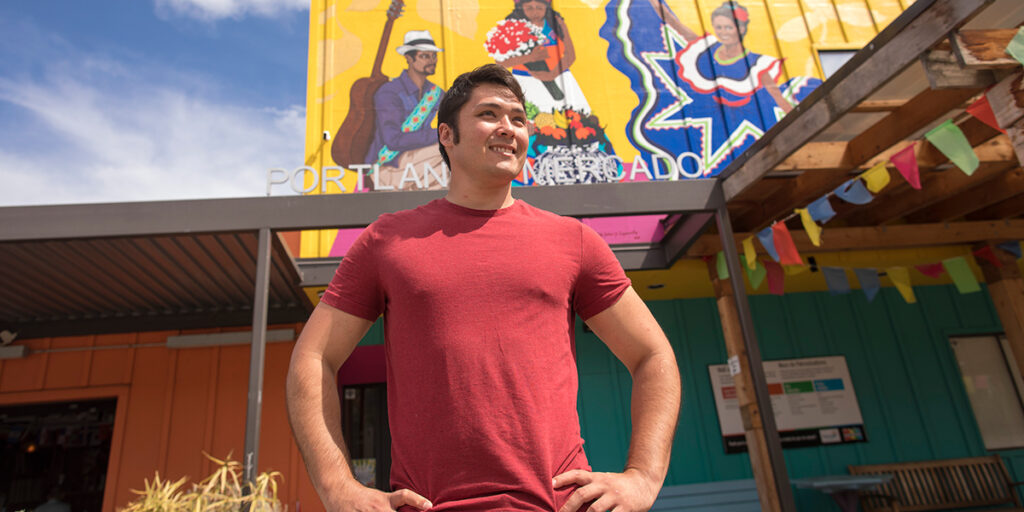 When Chris Bailey decided to start his first packaged food business, he turned to the Getting Your Recipe to Market course, a 14-week intensive program offered twice yearly through Portland Community College’s Small Business Development Center. In addition to starting two packaged food businesses, Pozole to the People and Bloom Caramel, Bailey now works as a micro enterprise developer, helping advise other entrepreneurs at Portland Mercado. Photo by: Jaime Valdez

The Getting Your Recipe to Market course culminates in an evaluation night during which students sit down with three or four people from New Seasons Market to present their product.

“At the end, all the entrepreneurs leave and all the New Seasons staff get together and talk about each product they saw and see who’s really ready and who might need some more help and support to get commercial ready,” Beaman said.

Lisa Tran, founder of Tân Tân Foods, graduated from the course in June 2016. On evaluation night, she brought along dishes for the panel to try: fried chicken wings with a spicy peanut sauce and hoisin-glazed baby back ribs. Then, she told them about her family’s story and history of the sauces they have been making in their Vietnamese restaurant, Tân Tân Café & Delicatessen, for over 20 years.

Coming from an immigrant and refugee family, Tran says it’s important to her to show customers what a refugee-owned, minority-owned and woman- owned business looks like. Growing up, she spent mornings before school in the restaurant and returned in the afternoon to do her homework there.

After college, Tran returned to work in the restaurant. She noticed customers would often come in just to buy their sauces in 32 ounce tubs. Then, she saw a flyer for the Getting Your Recipe to Market course at the SBDC and thought, “We’ve got recipes.”

Following evaluation night, Tran landed her sauces in all 18 New Seasons Market locations, a first for graduates of the program. In 2019, she began distributing her sauces to all the Safeway and Albertsons locations in Oregon and Washington.

As the company has grown, Tran has sought to keep hold of the personal relationships made along the way. “It’s been quite an adventure,” she said, “and I don’t want to lose that personal touch of it because our product is so personal.”

While Beaman estimated around 40% of the course graduates have gone on to commercialize their product, she measures the program’s success in other ways as well.

“For us, success is a lot of different things,” Beaman said.

“It’s your product commercialized and on the shelf. Success is also you get through this program and you realize, one, I don’t want to work in the food industry. I’ve learned about this and it’s not for me. Or, two, you realize at the end of the program that my product is not feasible. We just saved that client a ton of time and money and headache. So, that’s still success.”

Pozole to the People is on shelves across Oregon and Washington, but Bailey says the biggest value of the course was the connection it gave him to producers, entrepreneurs and resources.

For the first year after he launched his business, Bailey worked out of Portland Mercado’s commissary kitchen. He sometimes returns to Getting Your Recipe to Market to share his experiences scaling his recipe and working in a commercial kitchen. His work as an adviser at Portland Mercado has given him a chance to pass on the knowledge he’s gained to other entrepreneurs.

“I really love the role of entrepreneur and business adviser,” he said. “I believe in the strength of the local food economy, so if I’m able to make an impact on both fronts, that’s really powerful.”