Although it’s only eight months into its first year of operation, Portland metro-area LatinoBuilt already is making substantial headway on its goals.

The founders of the trade group, which bills itself as created by Latino contractors for Latino contractors, say they aim to fill a niche that until recently was mostly unfilled in the local construction industry.

“Latino contractors, we make up a significant part of the construction industry in the state of Oregon; we’re one of the largest minority communities out there,” Rosa Martinez, the organization’s president and advocacy chair, told the Business Tribune. “Looking at all of the existing programs out there, as Latino contractors … it seems like there are some gaps. We’re trying to fill them through LatinoBuilt.”

The group sprang from a conversation last fall during a lunch meeting between Martinez, who owns a demolition and abatement company called PMG Abatement, and Berenice Lopez, who owns H.E.L.P. Group, a residential contracting company based in Beaverton.

The two women both have been actively involved in several construction industry trade groups and organizations, but they always felt there was an additional step that needed to be taken.

“Everybody has good intentions, but there’s a lack of culturally sensitive understanding about what is really needed to help Latinos in construction … women especially,” Lopez, who serves as LatinoBuilt’s treasurer and education chair, said.

Martinez and Lopez moved from their lunch meeting to conversations with more industry colleagues, who all agreed something more needed to be done to help Latino contractors.

“We decided to put our heads together to start an organization,” Martinez said.

In building a board of directors for LatinoBuilt, Martinez and Lopez turned to industry colleagues who were business owners with at least a decade of experience each. Gil Carreon, for example, was so supportive of the idea of the organization that he agreed to come out of retirement to serve as board vice president and chair of the membership committee.

“Everyone on our board is an experienced business owner.  These are people … who know procurement and understand what the struggles are,” Martinez said. “They’re in a position to provide that leadership.”

“That’s the key,” Lopez added. “LatinoBuilt is led by Latino contractors. It’s how we differentiate ourselves. We were very mindful to make sure our organization leaders understood the industry. We’re all business owners. We’re all busy running our businesses. So, the limited time we have, we want to be effective.”

The board members have focused the organization’s efforts on a few key areas that address some of the most significant issues facing Latino-owned businesses in the construction industry. At the top of the list, for example, is providing construction training and education in areas such as safety and procurement for business owners and their employees who speak mainly Spanish.

Lopez has seen first-hand the difference providing information in Spanish can make.

Several years ago, she took a manual on installation processes that had been produced by an agency and translated it from English into Spanish. After the training manual in Spanish was made available to Latino installers, the quality of the work of those companies improved greatly, she added. Seeing that success, the agency reached out to a colleague of Lopez’s to translate subsequent versions of the manual into Spanish. 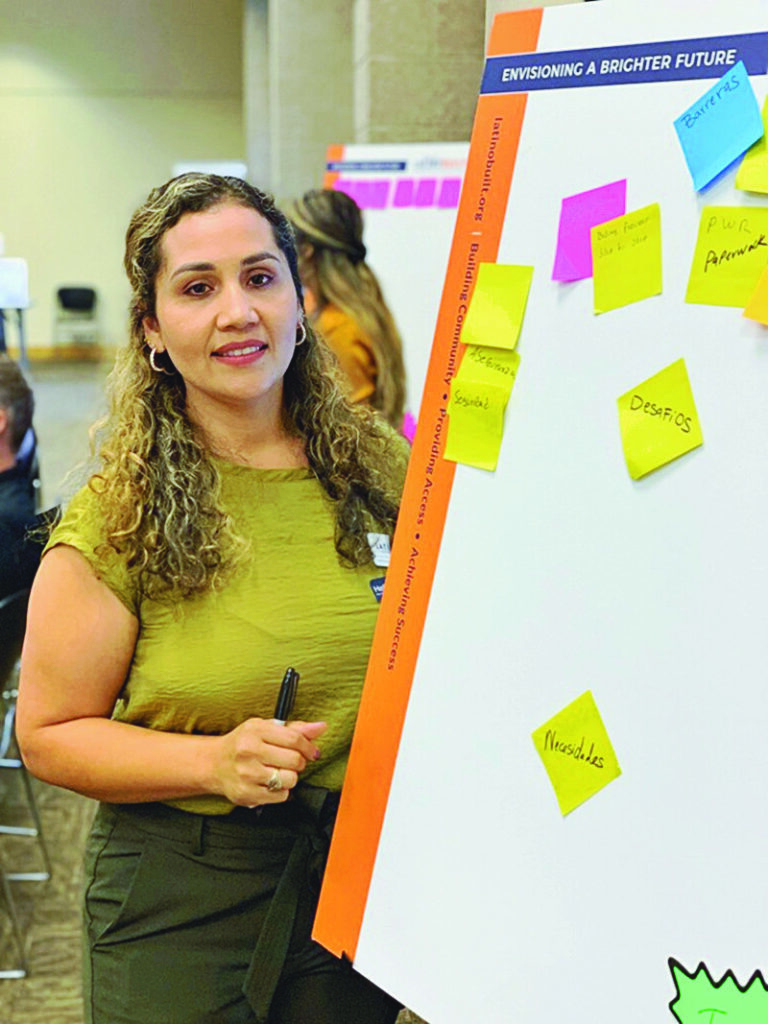 “Looking at all of the existing programs out there, as Latino contractors… it seems like there are some gaps. We’re trying to fill them through LatinoBuilt.” – Rosa Martinez, President, LatinoBuilt

When it comes to education and training, LatinoBuilt isn’t looking to reinvent the wheel, Martinez said. Instead, whenever possible, the group wants to partner with agencies and other organizations that already provide services to small businesses and minority contractors, with an eye toward helping them extending those services to the Latino community. One way to do that, Martinez says, would be the addition of services for Spanish speakers.

The Oregon Construction Contractors Board, for example, lacks marketing and informational materials geared toward both Spanish-speaking contractors and consumers. That’s something Martinez in her role with LatinoBuilt has recently discussed with the agency.

“The agency is aware they don’t have the component, and they’re wanting to work with us and shine a light on that aspect,” she said.

The organization also partnered with the city of Beaverton, which recently became a member of the organization, for a roundtable event for Latino contractors.

“The city of Beaverton was actually the one that reached out to us,” Lopez said. “The city said they had heard about us and said, ‘There are a lot of opportunities coming, Let’s collaborate and figure out together what it is we need to do to help the Latino-owned businesses.’”

“LatinoBuilt is led by Latino contractors. It’s how we differentiate ourselves. We were very mindful to make sure our organization leaders understood the industry. We’re all business owners. We’re all busy running our businesses. So, the limited time we have, we want to be effective” – Berenice Lopez, Treasurer and Education Chair, LatinoBuilt

The event, which was held at the Beaverton Public Library this past August, drew about 50 participants, which the organization felt was a good size that allowed an open and honest discussion about the business and industry challenges attendees face daily.

As LatinoBuilt moves toward its first anniversary in February of next year, the group will use the information it has gathered about specific needs of the Latino-owned businesses in Oregon’s construction industry to define the organization’s programs and partnerships further.

“It has been inspiring to work alongside a passionate team of pros to help define and build the LatinoBuilt brand,” Jennie Rodriguez, owner of Twirl Advertising & Design and the board’s secretary and marketing chair, said. “We have great things planned for LatinoBuilt’s membership and look forward to working with our community partners for positive change in 2020.”

The board also hopes to work with the state’s Certification Office of Business Inclusion and Diversity (COBID) to help streamline the process to make it easier for Spanish-speaking contractors to become registered to work on public contracts as minority-owned and emerging small businesses, according to Martinez.

“(LatinoBuilt) was created to basically empower the voices of Latino contractors in the community in an effort to help them overcome barriers, develop capacity, and promote and enrich lives,” she said. “That is our main focus — empowering those voices that have not been heard. There previously weren’t any (organized) advocates out there voicing that concern, and LatinoBuilt is now providing that.

LatinoBuilt’s first membership meeting took place on Oct. 23 in the lounge space of Lulu on Southeast Grand Avenue in Portland. The keynote speaker, Osvaldo “Ozzie” Gonzalez, who works in the building industry and is a candidate for mayor of Portland, spoke to the crowd about advocacy for Latinos in the construction industry.

LatinoBuilt board members felt the meeting was well attended with opportunities for networking between organization members and the general contractors, contractors and agencies that attended to support and learn more about LatinoBuilt’s mission and vision.

The organization will hold another general membership meeting from 5 to 7 p.m., January 22, at Lulu, 726 S.E. Grand Ave. For more information about the meeting as well as a list of other upcoming LatinoBuilt events, visit www.latinobuilt.org