AFTER NEARLY 40 YEARS as a waterfront crane operator, Jerome Polk decided to turn a part-time hobby into a full-time second career

Jerome Polk has seen the evolution of Portland first-hand for more than 60 years. He rose above racial prejudice to build a successful nearly 40-year career on the city’s waterfront before turning a hobby into a second career.

For the past 25 years, he and his sister, Sadie, have operated JP’s Custom Framing & Gallery on Northeast Killingsworth Street. The business has thrived and survived, even as the neighborhood around it has changed with time.

Polk contributes his business savvy and tenacity, in part, to lessons he learned from his father, who was a sharecropper in rural Mississippi.

“(Sharecropping) was another form of slavery,” Polk said. “The land owners set it up so that each year the tenants got deeper and deeper in debt to them.  There were two ways out — die or run away.”

Polk’s aunt, who was living in Portland, encouraged Polk’s father to move his family to Oregon.

“My dad brought me and my sister out here in 1949, about a year after the Vanport Flood,” Polk said. “About two years later, he brought my mom and the rest of my brothers and sisters out from Mississippi. I’ve been here ever since.”

After moving the family to Portland, Polk’s father started a janitorial business. Polk recalls rising at 4 a.m. to help clean restaurants before heading to school, and then spending evenings helping his father clean offices. In between, he sandwiched studies to keep his grades up and played football in high school. His teachers were aware of that he was working in the family business and helped him keep his studies on track. By encouraging him, he said, they inspired him to finish school and graduate.

“I look back on how hard it was, but I don’t regret it,” Polk said. “I learned a lot about business from my dad: Don’t spend more than you take in. Put out a good product. Treat people the way you would want to be treated. Things like that.” 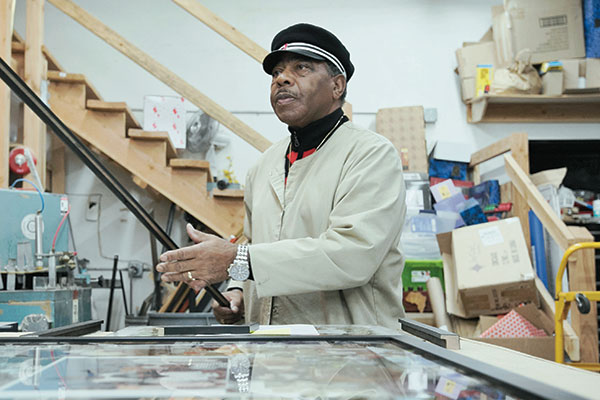 A knack for framing helped Jerome Polk turn a hobby JP’s Custom Framing & Gallery, a business that’s been holding its own in Portland for 25 years.  PMG PHOTO: Jaime Valdez 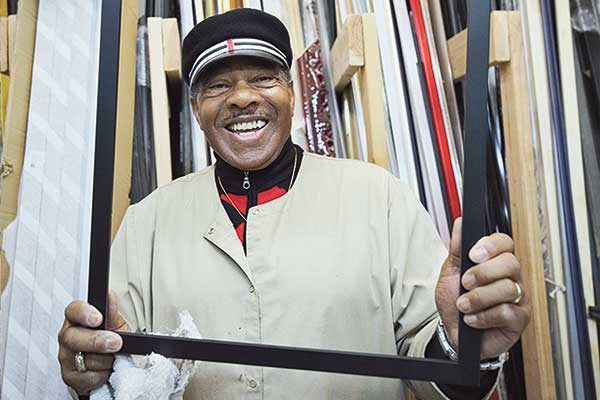 Polk graduated from high school and started working on the waterfront in 1968, eventually becoming a crane operator. In the early days of his career, prejudice was common, despite the presence of the longshoreman’s union. Polk, however, found ways to stand his ground. Though it took time, he saw race relations eventually begin to improve.

“Before ’63 there were no blacks on the waterfront,” he said. “The federal government required they hire 50, and they mostly hired older men so they wouldn’t stay so long. I just wanted to work and get along with people, but I wouldn’t take any abuse or toe somebody else’s line. I never did fit that mold. It’s been a long transition. I think that knowing who I am made a difference. What we put up with in the ’50s and ’60s, we didn’t in the ’80s and ’90s.”

As he moved through what would be a nearly four-decades-long career on the waterfront, he started doing picture framing on the side. He found he liked the work and soon began building a customer base.

“I just enjoyed it,” he said. “Working with my hands, being precise and careful. If you cut a mat or a frame just the slightest bit wrong, it’s easy to tell. I make sure everything that goes out is done right.

“Producing a quality product earned me enough business that I knew it was time to open a shop,” he added with a laugh. “People were coming by the house at night with things to frame and that’s when I knew we could make a go of it.”

Polk teamed up with his sister, Sadie, to open JP’s Custom Framing and Gallery 25 years ago. Because he was still working by day as a crane operator when he opened the frame shop, he worked at framing in the evenings. Meanwhile, Sadie managed the business during the day.

“She’s the backbone of the business,” he said.

Sadie had worked at Fred Meyer since high school. When the Killingsworth store closed and the property sold to the City of Portland in 1995, the facility became the Northeast Police Precinct. The city actively sought tenants for the street-level storefronts. Polk had originally operated his framing business out of his garage but had outgrown the space. The timing was right, so he moved in, set up shop and has been rewarded with steady business for the past quarter century. 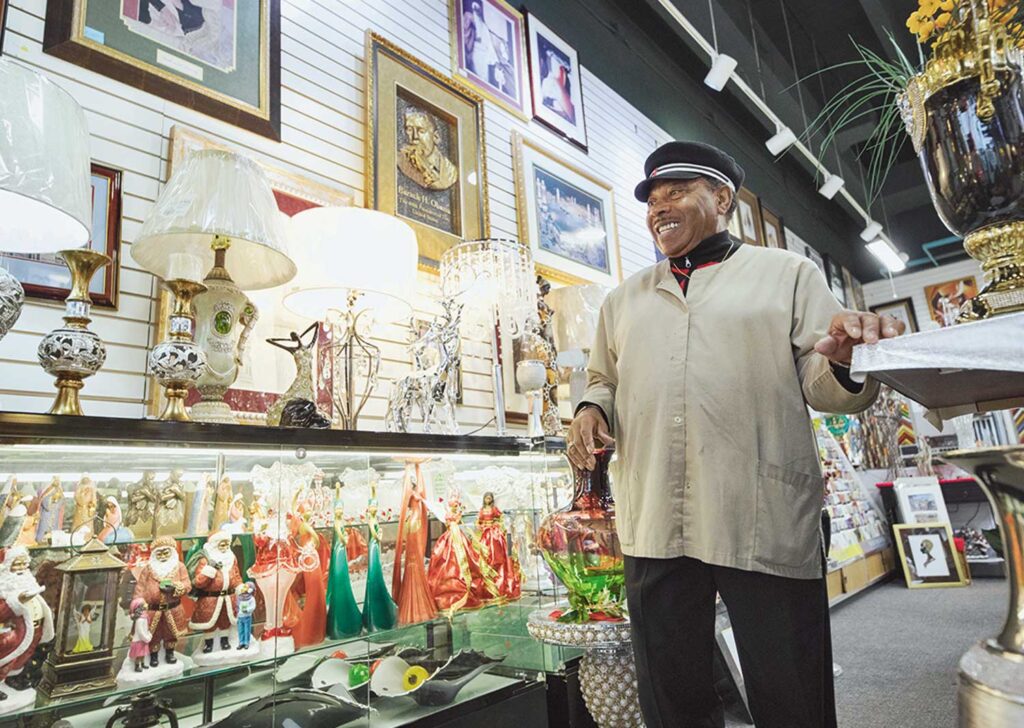 JP’s Custom Framing & Gallery, which Jerome Polk and his sister operate, has been in the same spot on Northeast Killingsworth Street for 25 years. PMG PHOTO: Jamie Valdez

“What I used to do by hand is now done with computer-programmed machines.  It’s so much faster. What used to take me 45 minutes now takes about three seconds.”

Polk’s reputation for fast turn-around, quality work has drawn customers from all over the city.  Automation has become a tool that lends itself to the basic element of what he does.

That efficiency allows him to typically turn around an order in a day or two, well less than half the time most framers need.

“What I used to do by hand is now done with computer-programmed machines.  It’s so much faster,” Polk said. “What used to take me 45 minutes now takes about three seconds.”

In addition to framing art and posters, he gets a lot of special jobs.  Football and basketball jerseys, diplomas, certificates, keepsakes, and custom frame stretching for artist’s canvases all regularly come through the shop.

Since opening the frame shop on Northeast Killingsworth Street,  he’s seen changes in the racial make-up in the neighborhood and of his customers. In 1995, for example, his clientele was mostly black; now it’s approximately 80 percent white. However, he emphasizes that the area around Killingsworth and Martin Luther King Jr. Boulevard has become ethnically more mixed as gentrification spurred redevelopment of the area. That diversity is evidenced by the restaurants that have popped up around Polk’s framing shop. Next to his shop is an Ethiopian restaurant. Across the street is a taco shop. Further down are a more traditional Mexican restaurant and a sushi restaurant nearby.

“It’s changed dramatically, especially in the past 10 years. It’s just a matter of growth,” said Polk. “There are six shops under the Police Precinct. Of the originals, I’m the only one left. I just roll with the changes.”

Now in his mid-70s, Polk said he has no plans to retire just yet. He’s not sure what will happen to the business when he is, though. Of his nine children, none are interested in the business. He has a nephew who has shown some interest, which might be a possibility. But it isn’t something Polk spends a lot of time pondering. For now, though, he’s happy with how his former hobby has grown into a solid second career.

“I’ll keep doing this because I like to,” he said. “And I sneak in as much golf as I can get away with.”