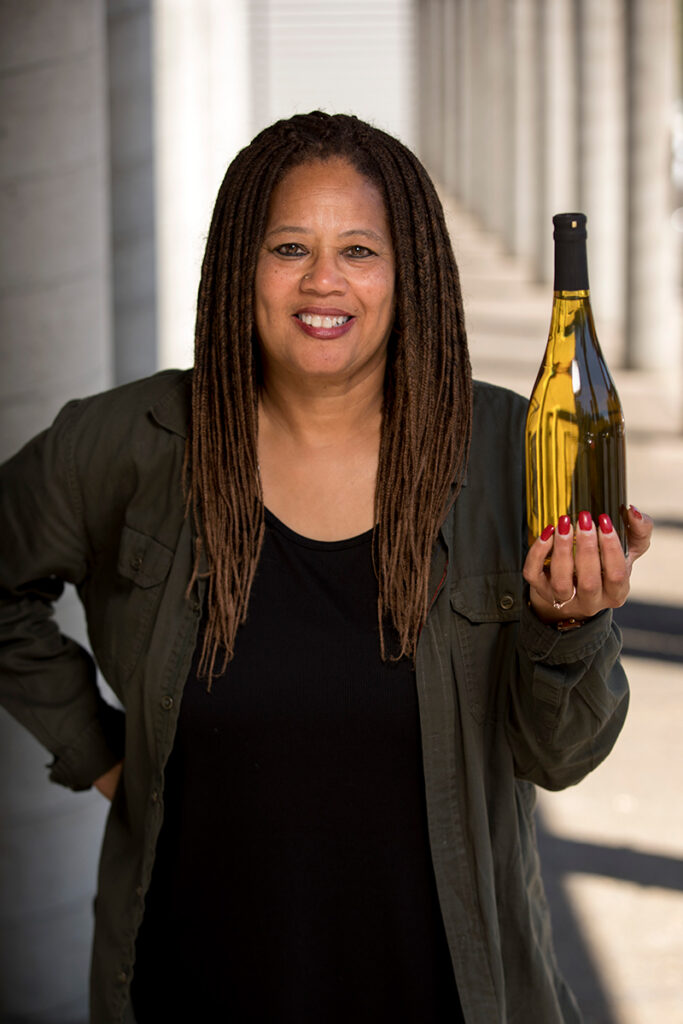 Stoney is able to pursue her second career as a winemaker now that she is semi-retired from social services work. She is executive director at StoneyBrooke Residential Services, a 24-hour group home for people with intellectual and developmental disabilities she established after working at Multnomah County Developmental Disability Services for nearly 25 years. She said she has long been interested in wines and winemaking. She even looked into buying a vineyard in Clackamas County, but wasn’t sure she wanted to take on the responsibility of operating an entire vineyard.

“Later I discovered that having a vineyard is not necessary to become a winemaker because you can purchase the grapes,” she said.

Stoney partnered with Abbey Creek Vineyards in North Plains to purchase grapes and began learning the art of winemaking from its owner, Bertony Faustin. Faustin, who also was executive producer of “Red, White and Black,” a documentary film about minority winemakers, said Stoney immediately made an impression on him.

“What makes Donna special is her story. After a successful career in adult foster care and being a first in many instances of that industry, she has the courage to reinvent herself at a time when most would choose to be content,” he said.

Stoney admits there were some initial hurdles as she launched Stoney Wines. Among them, the lengthy licensing process with the Oregon Liquor Control Commission and the myriad state and federal regulations that had to be met. “And all I did was purchase grapes, so imagine running a whole vineyard,” she said, adding Faustin helped guide her through the licensing and regulatory quagmire.

With personal savings she built over the years, Stoney was able to finance her new venture herself.

“I knew someday this is something I wanted to do, and I was smart with my money from a young age and put money back to invest in myself,” she said.

Stoney said she enjoys working in Abbey Creek’s vineyard and the wine production process. She has a lifelong love of science and said winemaking allows her to engage in that interest by learning how to use the yeast, blending and other skills involved in the process.

“I like the science piece of it, and it allows me to use my mind. I enjoy the whole process and for me that’s really important,” she said. “I like being in the vineyard, and even though I know it’s not mine I enjoy watching the grapes and thinking about the photosynthesis. Just blending the wine together is intriguing.”

Stoney earned Level 1 certification from the Wine & Spirit Education Trust (WSET) in Napa Valley, where she learned to identify the main styles of wines and key principals of food and wine pairing. She completed the Level 2 exam in Portland, which tested her understanding of the styles of wines produced from different varieties of grapes and the regions where they grow. Level 2 also included key classifications of grapes and wines and labeling terminology.

“I want to go through the harvest at Abbey Creek and then through the pruning, and then I’ll start school for Level 3 this fall,” she said. Level 3 certification prepares people to become sommeliers, or wine stewards, by developing a high-level ability to describe wines accurately and account in detail the style, quality and prices of wines.

Stoney said her collaboration with Abbey Creek Vineyards and her new venture is teaching her plenty of lessons so far.

“You’ve definitely got to be patient during the winemaking process and it’s fascinating to see it come to an end, in a sense, when you bottle it,” she said. “You’ve just got to be patient with everything you do, and you have to have faith in yourself and the product.”

Her advice for other women and minority entrepreneurs who want to start a food or beverage business is to develop their own narrative and a brand that is based on themselves.

“I do think sometimes that many women and unrepresented groups don’t see themselves in these groups,” she said. “It doesn’t matter your age, your race or your gender, you have to believe in yourself.”

Faustin added that one of the challenges women and minorities face when it comes to being beverage entrepreneurs is “the silly assumption or traditional mentality of ‘Does your husband make the wine?’ or the more encompassing idea that one doesn’t look the part if they’re not a white male.”

Stoney noted that everyone she has encountered within Oregon’s wine industry has been supportive and encouraging, from fellow winemakers to the instructor in her Level 2 certification course. Good advice from her parents has helped as well.

“I like taking risks. I’m not afraid of taking risks and I believe in myself,” said Stoney, who plans to open a tasting room in the future and, eventually, take over production of her wines.

“Just believing in yourself is more important than anything, I give that to my parents. They taught me to go after anything that I want and not to be afraid.”

Stoney will introduce her first two wines, a red called Bayani Pinot and a chardonnay called SisterFriends, during a Sept. 7 debut party that begins at 4:30 p.m. at District East in Southwest Portland and is open to the public. A portion of all sales of Stoney Wines will go to support programs for people with intellectual and developmental disabilities. To learn more, please visit www.stoneywines.co.