WHEN IT COMES TO THE CLOUDS OF COVID-19, THE STAFF AT SCOTT | EDWARDS ARCHITECTURE LOOKS FOR THE SILVER LININGS

Sid Scott is a glass-half-full kind of guy.

In his time as an architect he’s been through enough tough economic times to know that no matter how gloomy the current moment, there’s always a silver lining to be found if one is willing to look hard enough.

Like many architectural firms in Oregon, Scott and his team at Scott|Edwards Architecture have been forced to quickly figure out how to continue to work with clients and meet project deadlines in the face of the COVID-19 pandemic. They’ve wrangled ways to collaborate on in-progress design work on projects such as the Douglas Fir Apartments, an affordable housing project for Luke Dorf Inc. that’s slated to start construction in March 2021. They’ve done interviews for new projects via Zoom.

While Scott admits it was a steep learning curve, he also realizes the virtual experience his firm is gaining may very well open up doors of opportunity in the future.

“I see a silver lining with regard to how we communicate and how we do projects,” Scott told Opportunity magazine. “Once this is over, the ability to communicate virtually will put us in a position to do work pretty much anywhere in the country.”

The firm also has taken advantage of a lull in vehicular and foot traffic as a result of the state’s stay-at-home order to move forward on an expansion and renovation of its main office building at 2525 S.E. Burnside St. The work, being handled by Joseph Hughes Construction, is on track to still finish around the end of the year.

The firm has been able to keep busy even as other parts of the economy slowed down due in large part to the balance in the types of projects it has taken on, a mix of public, private and nonprofit projects that are at a range of different points in the design process. It’s a lesson that Scott learned after going through the Great Recession. While he admits that the current situation is unlike anything he’s ever seen, he knows that every economic downturn eventually turns around.

You think you’ve seen everything, and then this,” Scott said. “We made it through the last recession. You get hardened to that kind of thing, and then, whammo, something comes out of left field.

“You’ve got to be nimble and agile, and be ready to move in any direction.”

Understanding the need for flexibility was what led Scott and the other firm’s principals to begin tracking the pandemic as cases began to rise in other parts of the world. As COVID-19 began to spread in the U.S., they came up with a plan. For a few weeks, they had employees work in the office in shifts, doing a full disinfection and cleaning in between. As cases began to pop up in Oregon, they decided to move everyone to remote work. Within the space of nine days, every employee was hooked up with the basic tools and technology to allow them to begin working from their homes.

But even with preparation, working remotely instead of side-by-side left everyone feeling a little lost at first. Holding virtual lunches and happy hours helped. So did the photo that Scott sent to everyone the first Friday that they were all working remotely. In honor of his ritual of bringing donuts to the office every Friday morning, he took a picture of a donut and sent a virtual treat to every employee’s virtual office.

It’s that ability to find the silver lining that has helped Scott remember that while being able to continue to work on projects is a plus, there’s something that matters even more at Scott|Edwards Architecture.

“Our motto is, ‘people first, design forward.’ What we’ve been reminded is that people first really does mean something to us, and we’re taking it seriously,” Scott said. “We’re all in this together, and we’ve got to take care of each other.” 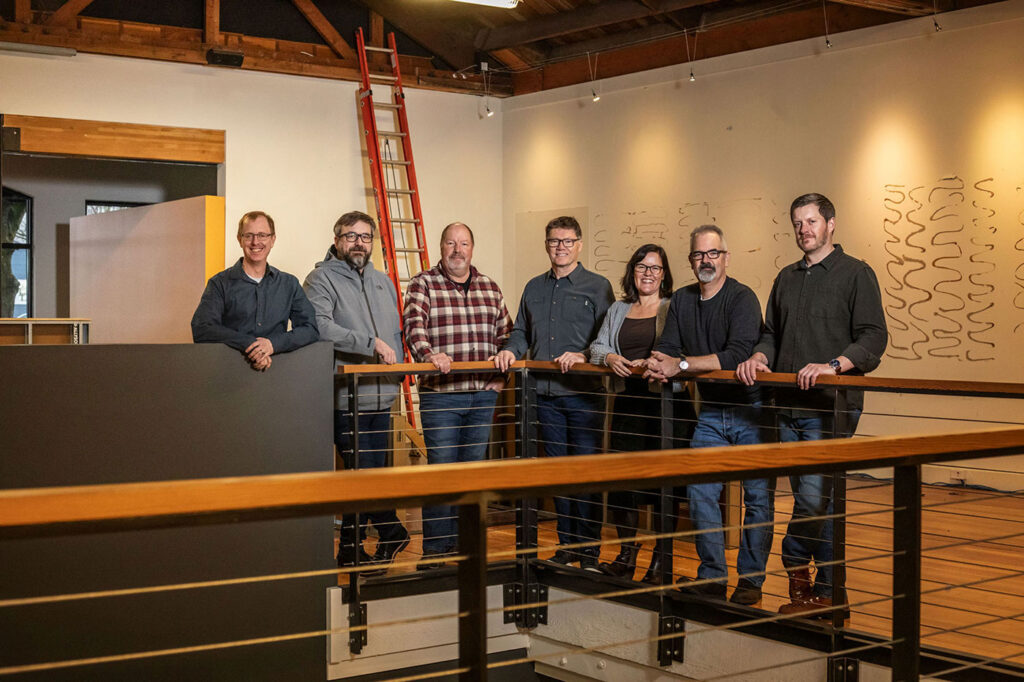 Scott|Edwards Architecture principals (from left) Rick Berry, Brian Mares, Jeff Hammond, Sid Scott, Lisa McClellan, Peter Grimm, and Alden Kasiewicz gather in the firm’s office during the early stages of an expansion and renovation project that started at the beginning of this year, before social distancing became the norm. Firm founder Sid Scott says the pandemic hasn’t slowed down the project and work is still slated to be completed around the end of 2020.

“Our motto is, ‘people first, design forward.’ What we’ve been reminded is that people first really does mean something to us, and we’re taking it seriously,”