Even though Dijenaire Frazier had a successful career in sales at an upscale Portland clothing store, he couldn’t help but think there was something more out there. There was only one problem: He wasn’t sure what that something was.
Then he saw a piece of fused glass while on a tour at Bullseye Glass Co. in Portland.

The chance encounter lit a fused-glass fire for Frazier that he has since turned into a small business called DC Ringz. While the business offers a range of items created from fused glass, the highlight items are the unique rings that Frazier creates. Although the business is still relatively new, it has already found a dedicated following that Frazier plans to use as a launchpad to grow his business into a global brand.

The move from Portland to the world might seem like a big jump to some, but it’s just business as usual for Frazier. After all, it was a leap of faith that launched Frazier into the role of entrepreneur in the first place. 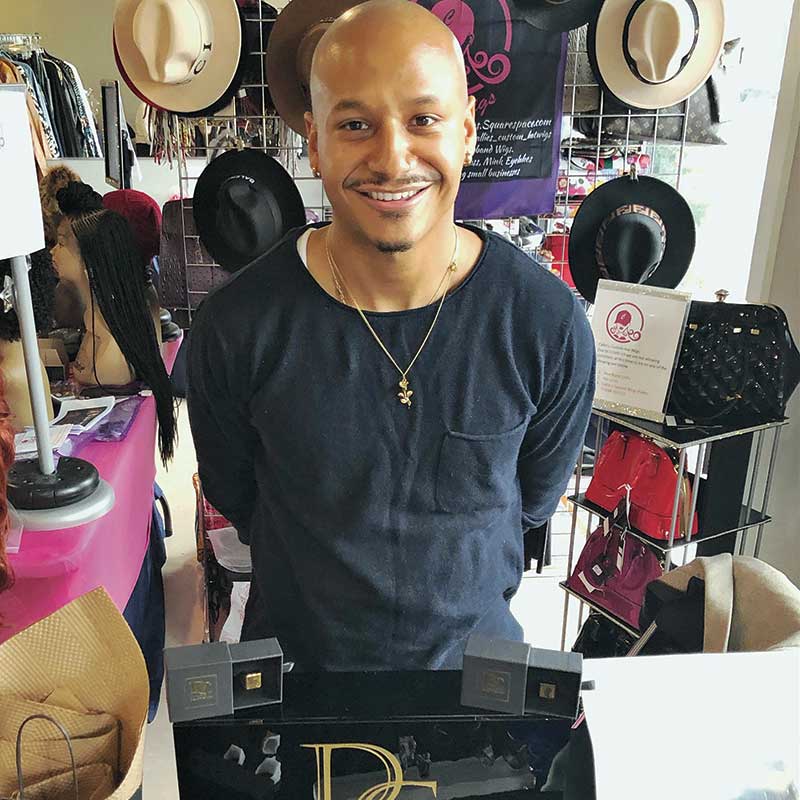 In addition to selling his glass-fused rings online, Dijenaire Frazier participates in local markets and pop-up shops. His goal is to take his business—his rings—global one day. PMG PHOTO: STEPHANIE BASALYGA

FOOT IN THE DOOR

Frazier had toyed with the idea of starting a small business before touring Bullseye Glass, but had been unable to find an idea for a product he felt was unique enough. The fused glass idea was different, however. Captivated by the material and the process that created it, Frazier did some research and learned the ancient Egyptians had made rings from colored glass.

“The Egyptians … all their jewelry was made from colored glass,” Frazier told Opportunity magazine. “It’s a lost craft and I thought maybe I could bring it back into the world.”

In order to do that, though, Frazier decided he needed to learn as much as he could about creating with fused glass. He approached Bullseye about a job. The only position the company had available at the time was in the warehouse, but Frazier jumped at the chance to get his foot in the door.

Frazier set out to learn all he could in his warehouse position. Within a year, he was offered a job in sales based on his previous retail experience. He used that position to impress supervisors at the company and eventually work his way into positions that would benefit the company while also helping him learn as much as he could about working with fused glass.

“Basically I was in school for the next five, six years of my life—learning everything I could about (fused glass),” Frazier says. “Working with artists, teachers, hobbyists, everyone coming through the front door.”

The items he offers for sale through his business are the result of that learning process, from glass plates and cutting boards that use skills honed during his earliest days working with fused glass to coasters that he began making when he was learning to etch on fused glass. But the centerpieces of the DC Ringz product lines are the custom fused glass rings that represent a combination of all of the lessons he has learned as he refined his skills as a craftsman.

“(The ring-portion of the business), this is my baby, I was trying to discover something no one has seen before—and I think I found it in these glass rings,” he says.

OBUSINESS BASICS, AND BEYOND

Learning the finer points of working with fused glass was just the first step for Frazier. As he prepared to launch a small business with his fused-glass rings as the focus, he realized he needed to build some basic business skills. He enrolled in business development classes at Micro Enterprise Services of Oregon (MESO), a Portland-based nonprofit that provides technical assistance and access to capital to help entrepreneurs start and grow businesses. Armed with a business plan, he officially opened DC Ringz.

Frazier began selling his rings through his business website as well as at pop-up shops and markets. His rings proved to be popular, but that created a new problem for Frazier: His production capacity was limited by the fact that he was working on old, inefficient equipment. He knew he would need to upgrade, but the cost was beyond what he had available to invest.
Working with MESO, Frazier qualified for a $10,000 loan through the organization’s 40/60 forgivable loan program. If Frazier makes on-time payments and meets certain criteria such as continuing to take business development classes and showing strong revenue, he will be eligible to have up to 40% of his original loan amount forgiven by the end of the repayment period.

Frazier used the loan to purchase new equipment that now allows him to turn out products at a faster rate. As a result, he has been able to lower his per-piece cost. By lowering that cost, he has been able to effectively compete in the market and offer customers a quality product at a price that is low enough to be competitive while still allowing him to meet the profit margins and revenue included in his long-term business plan.

As he moves into 2022, Frazier is working with marketing specialists at MESO to continue to finish building out a website for DC Ringz, including an e-commerce component, and refining product presentation. He’s also developing a list of gift shops and stores—including his former retail employer—that he plans to approach to carry his line of rings.

It’s all part of a long-term plan to one day see the rings he creates sold not just in Portland, but all around the world. He says he will know his business is a success when he finally sells a ring to his ultimate customer.
“Oprah. I’m coming for her,” Frazier says.