The restaurant industry brought Ken and Linda Johnson together, but it’s the printing industry that has helped the couple build a life for themselves and their family.

“I call myself a serial entrepreneur,” Ken Johnson told Opportunity magazine. “I’ve been doing (screen printing) for a lot of years. Depending on the economy, at times, I would work other jobs … just to make ends meet. But I’ve always managed to keep the printing business going.”

While those years of finding ways to keep a small business going during tough times weren’t always easy, they taught the Johnsons lessons that have come in handy as they now navigate new market conditions resulting from the pandemic.

The couple currently operates their business, Specialty Screen Printing, out of their home in rural Yamhill County, but its roots trace back to California.

In the 1970s, Ken was focused on working in the restaurant industry. From a start bussing tables, he moved into a position as a cook and then became a manager. Linda also was working in the food industry when the two met and eventually married.

After a few years of working in restaurants, Ken decided he was ready for a career change. He and Linda were living in California’s Bay Area, and when an opportunity arose to learn how to make printed circuit boards for companies like Intel and Apple, Ken jumped at it.

Ken found he enjoyed the screen printing process used to make the boards, and managed to earn a good living for several years. He and Linda eventually moved to Medford, Oregon. As the market for printing circuit boards began to shift overseas, the couple decided to try their hands at printing out items such as signs and stickers. They opened a small operation they called K&L Enterprises and set about learning how to run a business.

“I wore a lot of hats, and Linda helped with the books,” Ken said. “We got a lot of advice from other people. A lot of them were our customers, and we tried to work with our competition. The business just evolved over the years.”

As the couple’s children grew, K&L Enterprises became a family affair. The business began making a name for itself, handling printing for tobacco companies until the late 1980s and early ‘90s, when that market dried up.

Looking for a more extensive client base and more opportunity, the Johnsons decided to move to the Portland area. They settled in Tigard in 2004, picked up some steady clients, and eventually changed their business name to Specialty Screen Printing.

Prior to the pandemic, Specialty Screen Printing had built solid partnerships with several large customers, such as Audix Microphones, Chemwest Systems Inc., and FastSigns in Salem. As a result, the workflow has held relatively steady since Covid-19 sent the local economy into a tailspin earlier this year. In addition to commercial printing such as decals and bumper stickers, the business has offered industrial printing services that include creating control panels and identification plates for machine parts. A recent project even found Ken recreating the faceplate for a vintage Atari game console.

The need for social distancing and sheltering in place due to Covid-19 also opened a door for new revenue streams for Specialty Screen Printing. The business’ work popped up in the yards of Salem homes in the form of signs congratulating high school graduates unable to walk during traditional ceremonies due to the pandemic. The company also handled the printing of Black Lives Matter signs, also for the Salem area.

Even though Specialty Screen Printing keeps busy with orders, Ken and Linda aren’t sitting back and waiting for more business to come through the door. They’re keenly aware the pandemic is still causing a lot of uncertainty for small businesses in all industries. As a result, they’re looking at new ways to promote and market their business to connect with customers. Recently, for example, Specialty Screen Printing jumped into the world of social media. The company now has active Facebook and Twitter accounts and is attracting followers and friends on the platforms.

“We’re trying to get something going as far as social media to try to generate better cash flow,” Ken said. “A couple of main customers have kept us busy. Fortunately, we’ve done well so far this year; things could be a lot worse. But it’s also a wait-a-see-what-happens on a day-to-day basis. So, we’re just trying to do what we can think of to keep things rolling.” 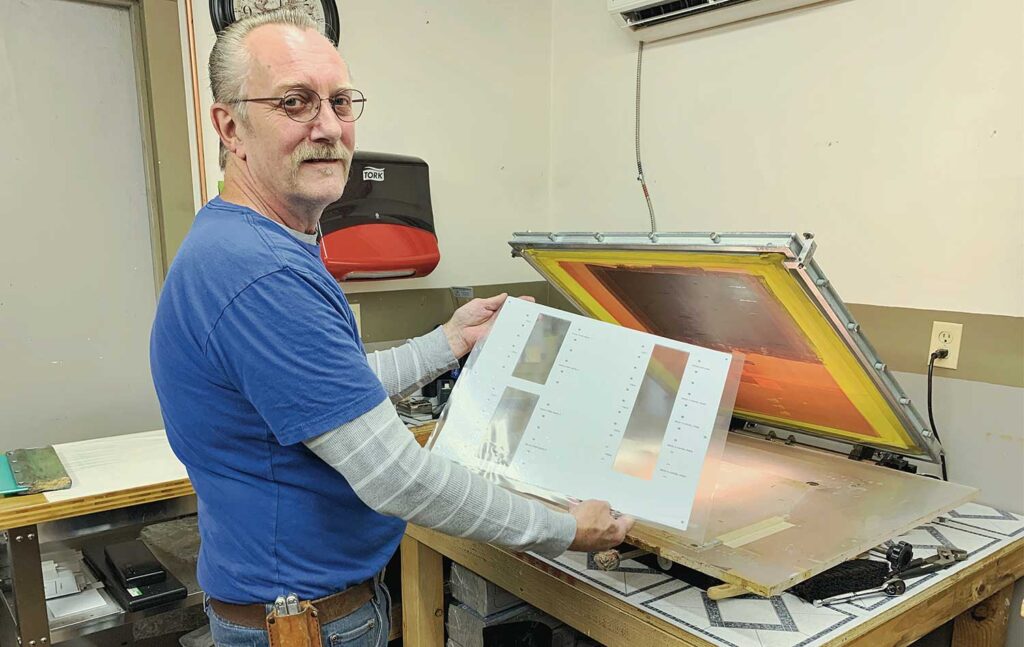 Ken Johnson says Specialty Screen Printing, the company he and his wife run out of their Yamhill Home, has been able to survive the pandemic thanks to the solid relationship with regular customers and social media marketing.