AS A MAN WITH A MISSION TO USE HIS BUSINESS IDEAS TO SUPPORT HIS COMMUNITY, THE OWNER OF WAVES ISN’T ABOUT TO LET FUNDING CHALLENGES OR THE PANDEMIC SLOW HIM DOWN

For Patrick Prince, running his own small business is as much about philanthropy as entrepreneurship.

When Prince started Waves Caribbean with an initial line of homemade barbecue sauces, he already understood what he needed to do to get his products onto store shelves. His professional resume includes positions in distribution for companies such as Sara Lee. However, he also had plenty of ideas for how he wanted to grow his business.

What was harder to obtain was capital to make that growth happen. Throw in the challenges from the pandemic and the challenges of being a Black entrepreneur, and it’s a recipe that might cause most people to walk away.

But Prince isn’t most people. Prince is an entrepreneur with non-stop ideas and a personal mission to make sure his success spreads to his community. That’s the basis of a business plan that’s guiding not just Waves Caribbean but a long list of projects that Prince is currently working on.

Although Prince had always wanted to be an entrepreneur, it wasn’t until he was laid off from his job as a regional manager for Sara Lee when the company was acquired in 2014 that he decided to turn his dream into a reality.

At the same time, unable to find a sauce he liked, he had started to try making his own and soon decided those attempts could provide the basis for a start-up small business. With family recipes from Trinidad and Jamaica as a starting point, he and his mother mixed spices and ingredients. Finally, they hit upon versions of a basic jerk sauce, a barbecue jerk sauce, a curry sauce, a chili sauce made with Scotch bonnet peppers, and a Caribbean ketchup that would hold up when produced in quantities needed for the retail market. Bold, colorful and eye-catching branding and labels supported the concept of an island influence.

With limited funds for marketing, Prince took a unique approach to get the sauces in front of potential customers. He and his family went around to farmers and night markets throughout the Portland metro area, operating a stand selling chicken made with the Waves Caribbean line of sauces.

“I wanted to test my theory to see if there was interest,” Prince told Opportunity magazine. “When we sold out of 2,000 pieces of chicken in an hour, I decided it was time to move to phase two.” With a background in retail distribution, Prince was armed with an understanding of how retail distribution systems work and what he needed to do to get bottles of Wave Caribbean sauces on local grocery shelves. He made phone calls, sent emails, and set up meetings. Little by little, he began to see potential deals start to come together. Going into 2020, Waves Caribbean was poised for growth. Prince had bottles of sauce ready to go, and he was taking steps to add a line of dry rubs, ginger beer, and healthy sorrel sodas. Then, in early 2020, things came to a screeching halt.

The festivals and summertime events he hoped to use to promote both the sauces and the new dry rubs and sodas were canceled due to the pandemic. He was passed over for most of the emergency relief money available for small businesses, and progress on the new soda line was held up by a shortage of cans.

But Prince wasn’t about to give up his entrepreneurial dream or on Waves Caribbean. Despite those challenges, he was able to move forward with several deals that saw his sauces show up on shelves earlier this year. They have already found a dedicated following.

He also decided it was time to start working on a distribution pilot program to help minorities and small businesses sell their products at grocery stores. He used Waves Caribbean for the first stages of the pilot. With leased space in a Portland warehouse and the basics of the pilot in place, he’s searching out other small-scale local businesses to continue the next testing stages. Prince has already talked with several state agencies and business-focused organizations about his idea.

The model he imagines will not only help entrepreneurs and small businesses get products on shelves, it also will feature a component to help them get paid more quickly. In current business models, payments are often delayed until the store is ready to place another order. For small businesses with only one or two products in a store, the lag time can cause a financial pinch. He sees his model as giving entrepreneurs more control over their inventory and their financial situations. He also hopes to be able to tap workforce organizations to help him hire people with disabilities.

Ideally, Prince hopes to have the distribution program in the final stages ready so that businesses can emerge from the pandemic with an option in place to begin to move forward. Prince has advice for other entrepreneurs and small business owners looking to follow his path and dream of seeing their products on store shelves someday. 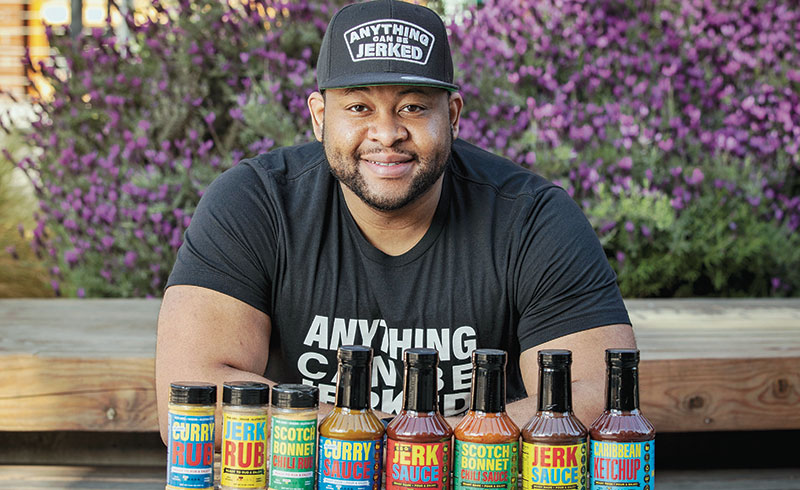 THIS PHOTO: Waves Caribbean owner Patrick Prince is in the process of testing a distribution system model he hopes to use to help other small businesses, especially those owned by minority entrepreneurs, get their products on store shelves while also ensuring faster payments. JAIME VALDEZ/PMG

TOP OF PAGE: In coming up with the five sauces sold under the Waves Caribbean label, Patrick Prince and his mother started with family recipes featuring Caribbean and Jamaican flavors and infuences. JAIME VALDEZ/PMG

Although Waves Caribbean is now back on track for growth, Prince faces another hurdle when it comes to accessing the capital needed to make that happen. Right now, Waves Caribbean’s position between being a start-up and being a large company means that the $50,000-or-less microloans that many start-ups rely upon are too small for his business’ growth needs. But the operation isn’t yet positioned to qualify for those large loans that will help it move forward.

Prince also knows that entrepreneurs of color historically have had a more challenging time than white entrepreneurs regarding access to capital from traditional banks and other financial institutions due to systemic racism.

“Being in the middle, you don’t qualify for the small things, but you don’t have enough capital to go after something big,” Prince says. “Then throw being a minority into the mix.” 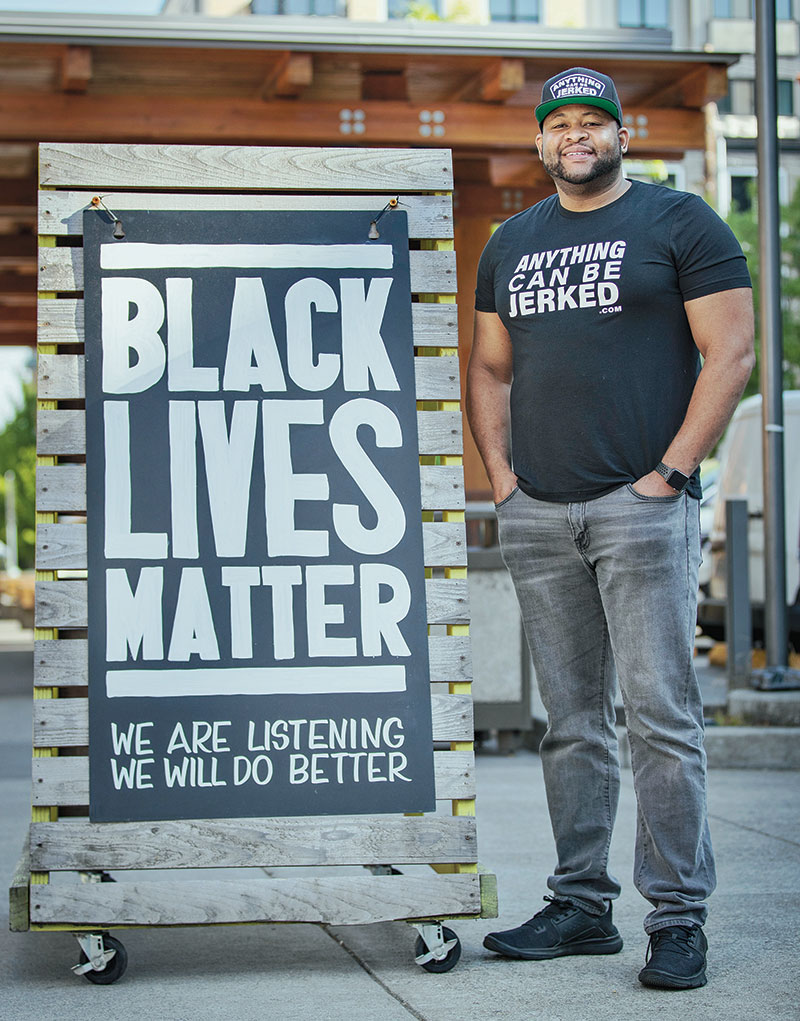 Patrick Prince sees Waves Caribbean as way to establish a footing that will allow him to blend his passion for entrepreneurship with philanthropy benefitting his community. JAIME VALDEZ/PMG

One solution for Prince has been to enroll in an Individual Development Account (IDA) at Micro Enterprise Services of Oregon (MESO), a nonprofit that helps underserved entrepreneurs start and grow micro and small businesses.

An IDA is a matched-savings account that helps individuals and business owners in lower-income brackets build assets, gain financial competency, and establish long-term self-sufficiency. While Some IDAs are designed to help people save to buy homes or pay for their education, Prince’s IDA is focused on helping him use the money he saves, along with a 5:1 matched contribution of federal dollars, to buy equipment and other assets for his business.

To enroll in an IDA program and receive the money match, participants are required to complete certain steps. In Prince’s case, he will be required to create a business plan and attend business development classes offered by MESO to help him expand his basic business foundation. It’s just one more step toward his dream on a path that’s already come with plenty of setbacks and challenges.

“Sometimes it’s daunting, but it’s a process,” he says. “You have to weather the storm and try to get better every day. In the end, it’s more about relationships. For me, that matters the most.” For Prince, one of the most important relationships he nurtures through his entrepreneurial efforts is the one with his community.

He’s currently working with a small group to provide blood pressure checks for clients at barbershops, especially those in communities of color.

And even though Thanksgiving is months away, he’s already preparing to repeat an effort he did last year. In November, armed with profits from Waves Caribbean, 100 donated turkeys and oven space at the Food Innovation Center, Patrick and a group of volunteers worked with churches and community organizations to provide 6,000 Thanksgiving meals for hungry Portlanders. He’s hoping that will become an annual event.

“I’m always mindful that I’m going to be successful by doing things the right way,” he says. “We did our best with our profit for the first three months, putting it back into the community to feed people.”