Skip to content
FOR LEANN DIPAOLA, THE SECRET TO SMALL BUSINESS RETAIL SUCCESS DURING THE PANDEMIC LIES IN POP-UP SHOPS, E-COMMERCE AND A CONNECTION WITH OTHERS

As a small business owner, Leann DiPaola has long understood the benefi t of being part of a community. However, as the pandemic took hold last year and began shaking Portland’s business landscape’s economic foundations, cultivating and supporting community became more than a choice for DiPaola. It became a necessity for survival.

Before the pandemic, DiPaola found community within the Southeast Division Street building where she leases space for her vintage and new clothing retail shop, Wild Cactus Boutique. Her landlords have their renovation and remodeling business in the building. There’s also a small bar that opened at the beginning of last year. The building features what DiPaola describes as an “open-house” design, including a backyard-like space with a couple of food carts and tables for seating that makes it ideal for events.

“I feel like our building is a living, breathing organism,” DiPaola said. “We’re all in it together. My customers are their customers.”

But as the pandemic began to limit how the businesses in the building were able to connect and support each other, DiPaola decided to look into different ways to cultivate community.

She reached out, via social media and email, to other womenowned micro and small businesses that she’s gotten to know since arriving in Portland with an idea she believed would help them all survive as revenue shrank and uncertainly continued to grow.

“I’ve always been involved with the community in one way or another,” DiPaola said. “I just wanted to fi nd a way to maintain that connection.” 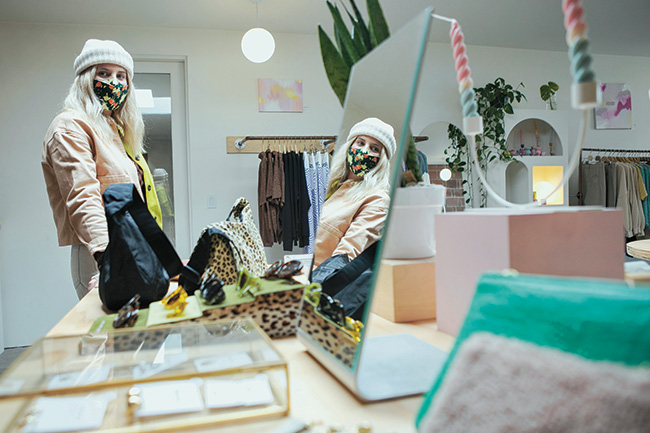 Despite a heavily saturated vintage/second-hand/consignment market in Portland, Leann DiPaola has found success by filling her store, Wild Cactus Boutique, with a mix of vintage and new clothing. JAIME VALDEZ/PMG

A PERFECT FIT IN PORTLAND

DiPaola lived in Lake Tahoe when she first decided to turn her love for collecting vintage clothes into a business. At the time, she was managing a small boutique where she could place some of her vintage items along with selling them through the online platform Etsy.

“I learned a lot from that,” DiPaola told Opportunity magazine. “I learned how to manage a boutique and how to sell my own vintage.”

Eventually, she decided it was time to take a leap and open her brick-and-mortar boutique. Retail space in Lake Tahoe was expensive, so she decided to move back to her hometown of Cleveland to pursue her retail dream. In less than two months, she found a storefront, packed up her belongings, and opened the doors of her first vintage clothing store.

“It was crazy, but it was fun,” DiPaola recalled. “It was such a good experience for me to just jump in. I think I was I was naive enough at the time to just do it without any serious thinking. It just felt super right to me.”

As the Cleveland store took off, DiPaola found herself also spending time in Portland, where her boyfriend had relocated, and began looking at the possibility of opening a boutique in the city. Although the vintage/second-hand/consignment market in Portland was saturated, she thought a shop offering a mix of vintage items and new items was unique.

In 2019, she decided to move forward with opening a Portland boutique, found the Division Street Building, and began filling it with women’s clothing, shoes, accessories and knick-knacks. She scoured a range of places for the vintage items, a process she likens to a treasure hunt. For the store’s new items, she turned to small independent brands in places such as Australia, London and California.

As she opened her new store, she soon found herself flying back and forth between Portland and Cleveland, balancing the duties of a two-state operation. The almost constant traveling, however, began to take a toll.

“It was insane,” DiPaola said. “I felt like I was never getting a chance to sleep.”

She decided to close the Cleveland store in February of last year and was looking forward to focusing her full energy on the Portland boutique. Then the pandemic hit.

She closed Wild Cactus temporarily in March of last year as state-issued stay-at-home orders cleared the Portland streets of customers. But even as she prepared to open as summer approached, she realized it wouldn’t be business as usual. The foot traffic in downtown Portland was still sparse and, like many small businesses in Portland, the boutique’s revenue was down.

That’s when DiPaola decided it was time to think outside the box. She sent out a call to other women-owned businesses via social media posts and email messages, inviting them to open a one-day pop-up shop for four hours in front of her storefront. Among those who took her up on the offer of free sidewalk space was a friend who had just started a homemade bread business, and a florist who sold some of the ceramic work she also creates. As an added incentive to get people to stop and browse, DiPaola also put some of her favorite items out on a rack on the sidewalk.

“People could shop in front of my store and then shop in my store. We had a lot of success with (the pop-ups) over the summer.”

While the community helped keep her spirits and Wild Cactus’ revenue up, DiPaola also knew sidewalk racks and popups alone wouldn’t keep the boutique in business. She also had to adjust some business practices, pivot where she focused her energy, and learn to embrace a new retail normal.

“I just felt I had to get really creative and hustle in a way I wasn’t used to.”

DiPaola already had an online store when the pandemic hit, but it was just a basic feature of the Wild Cactus website. As stay-at-home and business closure orders went into effect in March and April of last year, DiPaola realized she would need to shift the energy she had always devoted to the brick-and-mortar side of her business to building up online sales.

“When we closed down, I put all of my blood, sweat and tears into the online store to build it up. But it’s like a whole different beast. The online retail, and e-commerce in general is a lot different than an in-store shopping experience.”

As part of the online service, DiPaola added local delivery and pick-up. She also stepped up her use of social media to promote Wild Cactus’ online inventory. She quickly learned Instagram was one of her best resources for reaching local customers and connecting with shoppers from across the country and the world.

“I’ve been getting orders from crazy places lately: France and New York City and Austin (Texas). It really is because of Instagram.”

Using a platform called Shopify also helped make the pivot to e-commerce transition a little easier, allowing DiPaola to link in-store and online inventory into a single database that updates in both areas as items are added or sold.

“I used to have to do that by hand, and it was so timeconsuming and always hard to get it right. Now it’s a very seamless system. I would tell anyone who has a storefront and online store to use Shopify.” 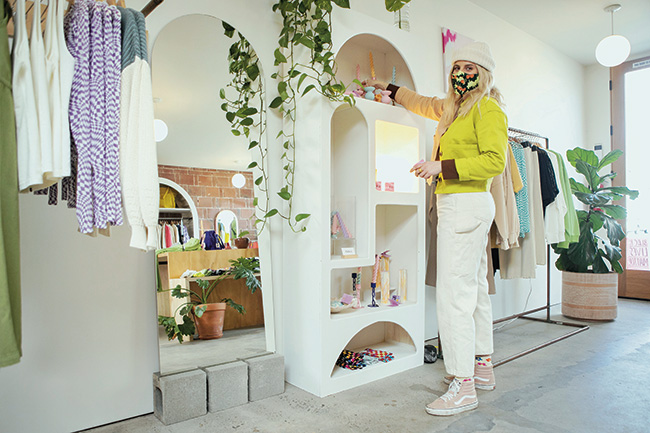 Although online sales have grown during the pandemic to represent half of Wild Cactus’ revenue, Leann DiPaola remains committed to having a brick-and-mortar presence for boutique. A storefront, she says, offers a chance to interact with customers in ways that can’t be replicated online. JAIME VALDEZ/PMG

NEXT STEPS FOR THE NEW NORMAL

After making it through a summer DiPaola describes as “weird,” she was relieved and thankful to see a big rise in customer in-store traffic jump as the fall rolled around. While part of the increase was due to a drop in the number of COVID-cases, DiPaola also attributes it to another factor.

“I felt like people were really ready to get back into the world. We tried to harness that energy to continue it through the winter.”

But even with taking steps to try to keep the momentum going, DiPaola faced a challenge when it came to figuring out how much inventory to build up for the holiday season — especially as COVID-19 cases began to climb in November and December — spurring calls at the national, state and local levels for people to step up limiting interactions with others.

“It was up and down, up and down,” DiPaola said. “It was all over the board, so it was super hard to plan for.”

Her online sales, however, have been a consistent bright spot, exceeding DiPaola’s expectations. Prior to the pandemic, online sales made up just 10% of the boutique’s total sales. They now represent half of all sales.

DiPaola plans to continue keeping the e-commerce site thriving going forward, but she also has no plans to step away from the in-store aspect of Wild Cactus. She sees the latter as representing the very reason she opened her business in the first place.

“For myself, I’m very into the whole experience of inperson shopping. I like to go into a boutique and get the vibe of everything, touch and feel the products, make a connection with the store and the people who are running it. That’s why I chose to take this path and be a small business owner. I love the connections you make, the conversations you get to have with people.”