Skip to content
AT MARY ROSE BOUTIQUE, OWNER JULIE ALLEN OFFERS A CLOTHES-BUYING EXPERIENCE THAT’S THE PERFECT FIT FOR EVERYONE

For Julie Allen, being a small business owner is all about being a survivor — in more ways than one.

Allen is the owner of Mary Rose Boutique, a shop in Oregon City that specializes in size-inclusive clothing. As a result, shoppers who visit the store won’t find an inventory typical of most clothing stores, where plus-size and smaller-size collections offer different styles and lines. Instead, all of the items that Allen’s store carries are available in a full range of sizes, from extra small to extra-extra-extra large. It’s a model designed to remove any stigma and create an environment that encourages women to love their bodies.

“People who live in larger bodies should be able to shop in the same place that people who wear a size medium shop,” Allen says. “I want you to love your body the way it is. We strive to include everyone.”

That mindset runs contrary to the message that society and the clothing industry traditionally have promoted. Allen knows first-hand how damaging it can be for women to try to buy into those unrealistic standards. Six weeks after giving birth to her son, she went shopping for clothes. The trip ended in tears.

“Nothing fit me,” Allen recalls. “I was six weeks postpartum, so of course, nothing fit me, but I didn’t know that back then. The message surrounding me in the mirrors told me that something was wrong with my body. That’s the message society gives you: If the clothes don’t fit, you’re the problem.”

Allen, however, decided to become the solution. The more she thought about her experience during that shopping trip, the more she began to wonder how she could begin reshaping that message into something more positive. 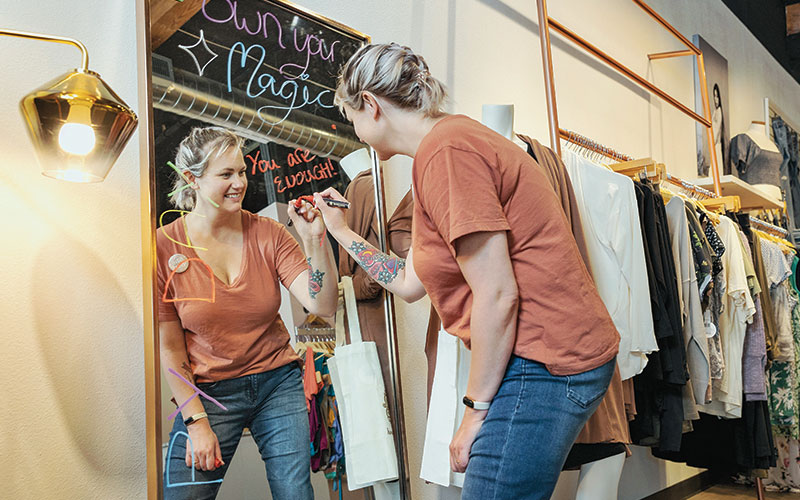 Julie Allen founder of Mary Rose NW Boutique, writes a message on the ‘Affirmation Mirror’ in her size-inclusive clothing store in Oregon City..

LOOKING IN A MIRROR

Allen understands how body image can take a toll not just on women’s self-confidence but on their physical and mental health.

From the age of 10 or 11 through her 20s, Allen had battled eating disorders. Those years were marked with bouts of anorexia and bulimia interspersed with visits to therapy and treatment facilities.

“I don’t remember a lot of my teenage years,” Allen says. “I was in and out of hospitals and treatment facilities. My brain was starved. It was a repeating pattern.”

Allen’s parents were there for her, supporting her as she worked to overcome her eating disorder. But when she was raped at the age of 18, her eating disorder progressed from bad to worse. In her early 20s, however, Allen had a revelation. She was babysitting her cousins when she realized how her eating disorders were affecting her — and those she cared about.

“I ate something and locked myself in the bathroom to do my eating behaviors. I remember looking in the mirror and thinking, “Who is this person?’ I realized then I was completely out of control.’”

One month later, she checked herself into a residential treatment facility, realizing it was her last chance.

“That was the first time that it was my choice, and I knew I wasn’t going to make it out again if I relapsed.”

Allen did make it out. Even though years have passed, however, she doesn’t say she’s cured. Instead, she says she’s in recovery.

“It’s similar to addiction,” Allen says. “(Addicts) are always in recovery, and that’s what speaks to (eating disorders) as well.” 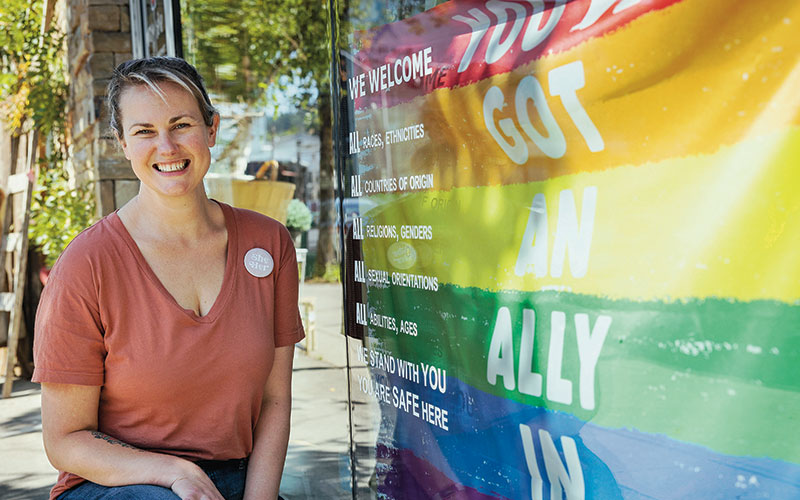 BELOW: Julie Allen, left, used her mother’s middle name – Mary Rose – for the store as a way to recognize the support her parents have provided over the years. JAIME VALDEZ/PMG 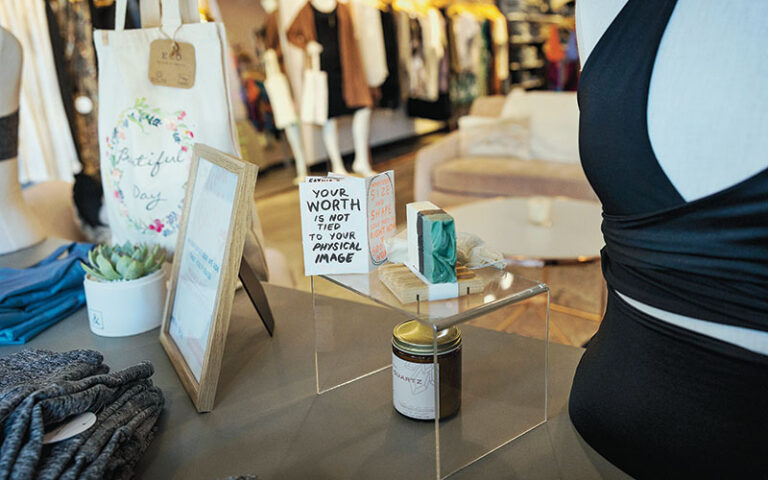 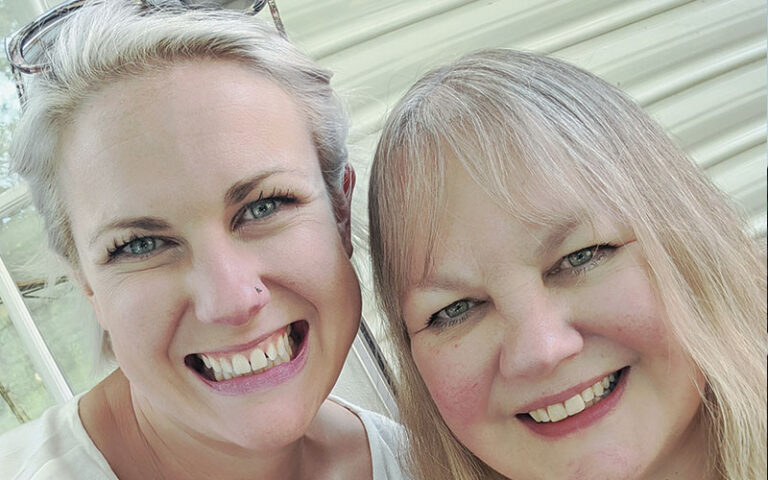 Allen has carried something else from that time in treatment with her over the years. To grow, she made a promise to herself to do something every day that scares her. That promise kept popping up in the back of her mind after her ill-fated shopping trip.

Before having her son, she had worked as a physical therapy assistant, specializing in post-acute rehabilitation. After becoming a mom, she knew she didn’t want to go back to that job. Instead, she began playing with the idea of launching a boutique that would specialize in providing size-inclusive clothing that would make everyone feel welcome.

The only problem: She had zero experience in the clothing industry or in running a business. The idea of stepping out of her comfort zone on both counts was more than a little daunting.

“The idea of running a business is terrifying — especially if you have no experience,” Allen says.

Even so, she decided to challenge herself and set out to learn everything she needed to know. She started on YouTube, researching and reading. She learned how to run a clothing boutique. She found out about conventions where different brands and vendors gathered to show off their latest styles. She obtained a business license and formed an entity for her business. She even decided on a name for her boutique that incorporated her mother’s middle name, Mary Rose, as a tribute to the woman Allen said has always been her biggest supporter.

Allen decided to start her small business with as little overhead as possible. Rather than establish a storefront, her boutique initially consisted of an online presence along with two racks of clothes that she would haul around in a van, going to various farmer’s markets.

The boutique’s focus on a size-inclusive inventory, supported by a healthy social media presence, started to attract attention. After a year in business, Allen decided to expand into a storefront on Oregon’s City’s main drag, a physical space where everyone could be included.

Keeping the store stocked turned out to be easier said than done. The average American woman wears a size 14 or larger. However, a large portion of mainstream manufacturers and brands only carry sizes small through large.

“That’s been very frustrating,” Allen said. “I would go to markets or visit a new brand and ask if they carry plus sizes. Nine times out of 10, the answer was no. So I moved on to another one.”

As she moved on, she also became aware of other problems in the clothing industry, which is one of the leading offenders for creating waste that ends up in landfills.
“There are a lot of things about the clothing industry that I found very disturbing: its impact on the environment, on animals, on workers.”

Allen became so disillusioned by what she learned that she decided to switch her business model from fast fashion, or cheaper clothing produced by manufacturers who chase trends, to slow fashion, which focuses on high-quality items made from sustainable materials via ethical means of production. But even then, she faced challenges. It was almost impossible, for example, to find larger-sized clothing that was sustainably produced.

“Sustainable options for inclusive-size clothing, it’s a market that just doesn’t exist. It took me six months just to find the handful of brands we now carry.”
Once again, when faced with a problem, Allen decided to become the solution.
“The options I wanted just weren’t available, so that prompted me to start my own clothing line.”

With no experience creating a clothing line from scratch, Allen returned to YouTube. With what she learned, she came up with her own designs, tapping her tastes and what she knows her regular clients like, as well as bouncing ideas off her staff.

She admits she’s not an artist, describing her efforts as “photos with lots of arrows” rather than sketches. She plans on hiring a pattern maker to help take her ideas and turn them into something a manufacturer can work with.

She’s also sourcing fabric, looking at sources that use minimal water and blends that will be soft against the skin. Next up is finding a factory that pays a fair wage and respects workers to make the clothes in the range of sizes — from extra small to extra-extra-extra large – that Mary Rose Boutique will carry.

The result, Allen says, will be a Hope Continues, a casual wear line for the “chic minimalist” that is ethically made and size-inclusive. She’s eyeing spring of next year for a debut of an initial seven pieces.

“They’re going to be simple pieces but with an elegant quality. I really want people who wear these items to feel confident and sexy, to feel beautiful in their own size.
“I also want to be transparent. I want to be able to tell my customers where the materials came from, to say these are the human beings who produced (the clothes).”