Portland filmmaker Dawn Jones Redstone was gearing up to shoot her first full-length feature film early last year when the pandemic brought that plan to a standstill.

Looking back, she’s convinced that having to hold off on starting filming turned out to be a blessing in disguise. “It gave me more time to spend on the story,” she told Opportunity magazine.

Jones Redstone originally had planned that the   lm, Mother of Color, would tell the story of a single mother trying to navigate a barrage of challenges to get to a job interview. But the current events — from the pandemic to the calls for greater racial and social justice after the murder of George Floyd — led her to think there might be more the story she wanted to tell.

“The story was transformed by watching what was happening in the world,” Jones Redstone said.

For one thing, she began thinking about how people of color could tap messages from their ancestors to find inspiration, hope and guidance amid the turmoil.

She also found herself facing daily challenges as she and her wife tried to navigate their kindergarten-age daughter through the new world of virtual schooling. The experience helped her realize she wouldn’t want to watch or make a fillm focused on a single mom having a hard time. She decided, instead, to reshape her lead character’s story by giving it a broader historical context. While the new version of the story still centers on a single mom, it now focuses on her decision to run for a political office while facing the challenges of being a parent and a woman of color. As she makes her way through her journey, she receives messages and signs from her ancestors that help her along the way.

Part of the idea to have her main character pursue political office came to Jones Redstone as she began to wonder what it would be like for a rising political star like U.S. Rep. Alexandria Ocasio-Cortez if she were a single mom. What challenges would she face? How would she overcome them?

However, the more significant inspiration for the resulting main character in the film turned out to be closer to home. Jones Redstone had previously worked on a project with Ana del Roc o, a single mom who had won a seat on a local school board. The two women struck up a friendship. Del Roc o is an associate producer for Mother of Color.

“We both wanted to work together again, and I pitched her the idea of a film loosely based on her life as a single mom of two working in politics,” Jones Redstone said. “I began interviewing her and began to shape a story. I included some things that actually happened to her and made up a lot of other things. I interviewed other people and took bits from their stories, but it’s definitely inspired by her — and she’s starring in it, too.” 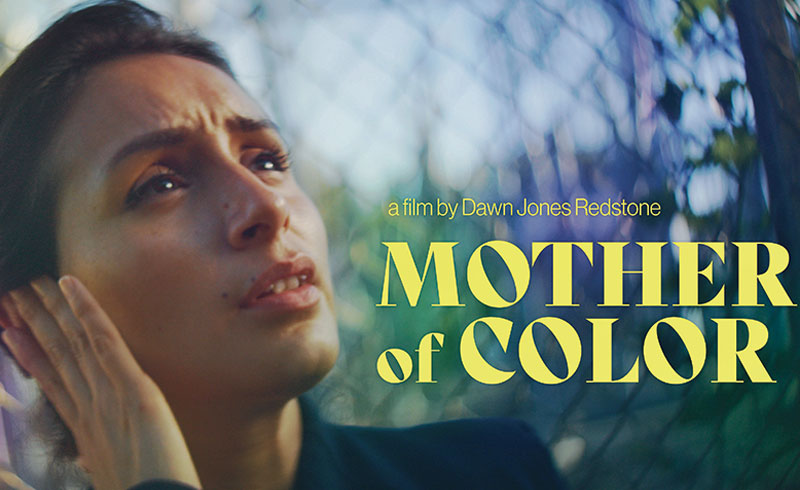 Dawn Jones Redstone’s full-length film, Mother of Color, will follow a single mom as she overcomes hurdles on her way to running for a political office, guided by messages from her ancestors. COURTESY: EMMA BROWNE

THE FILMS OF
DAWN JONES REDSTONE

To learn more about Dawn Jones Redstone’s films, view her director’s reel or contribute to a Mother of Color “overflow” funding campaign on Go Fund Me, visit her website (https://dawnjonesredstone.com)

The grueling process of rewriting the script was just the beginning of the hurdles Jones Redstone has faced in bringing Mother of Color to the screen.

Each time she makes a film, she has to find funding. For her very first film, Sista in the Brotherhood, she used Kickstarter. While she’s used other crowdfunding platforms for other projects, she decided Kickstarter would be the right choice for Mother of Color, even though it came with some risk.

Because Sista in the Brotherhood had been a short film, the campaign goal had been modest, but Jones Redstone had tackled it single-handedly. This time around, she would have a team to help out, but having to go after a higher dollar to cover the cost of filming a full-length feature would mean more pressure.

“The whole embarking on that 30-day campaign is very intense,” Jones Redstone said.

That pressure started even before the campaign officially launched online. The filmmaker and her team came together for a strategy meeting to decide exactly how much they wanted to raise.

“(Kickstarter) is all or nothing, so getting that number right is all-important,” Jones Redstone said. “Too low, and you end up with not enough. Too high, your campaign fails. We tried to come up with a number that was ambitious, but if we worked hard, we would be able to get it.”

“We passed our goal by $10,000,” Jones Redstone said. “I was definitely overwhelmed by the response.” 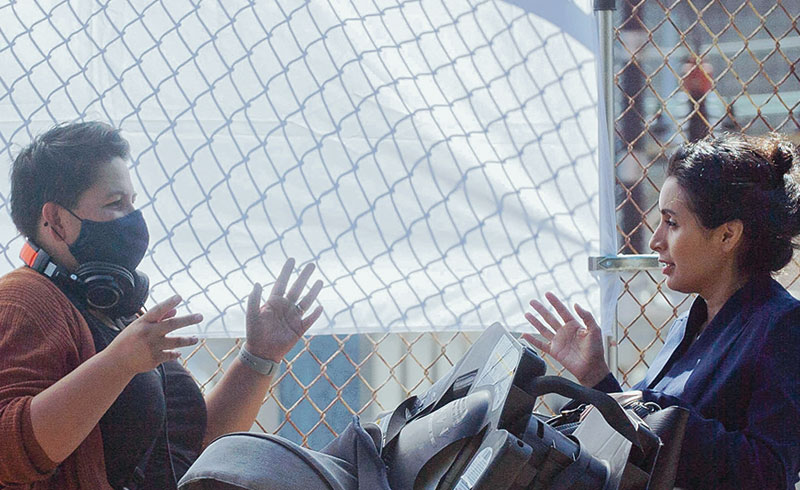 Filmmaker Dawn Jones Redstone (left) is the writer and director on Mother of Color, a full-length feature film that will be shot in Portland and star Ana del Rocio (right). COURTESY: EMMA BROWNE

TEAMWORK AND A FAMILY CONNECTION

Before Jones Redstone became a filmmaker, she was a journeyman carpenter. She eventually left working on construction sites to work for Oregon Tradeswomen Inc. (OTI), a Portland-based non-profit that helps women move into careers in construction and other nontraditional industries. While at OTI, she began laying the groundwork to start her own small business pursuing her still photography, video, and filmmaking interests. In 2012, she left OTI and opened Hearts and Sparks Productions. Jones Redstone began working on a short feature film when she wasn’t providing clients with what she described as “community-minded” documentarystyle videos for clients that included OTI and the Oregon Bureau of Labor and Industries.

The 20-minute film, Sista in the Brotherhood, tells the story of a young Black woman who, while finishing up an apprenticeship in carpentry, is forced to choose between taking a stand against race and gender discrimination on a project site or quietly accepting the situation to become a journeyman carpenter.

While the story is fictional, the main character’s situations are based on both Jones Redstone’s experience on project sites and those of other women journeymen she knows. Jones Redstone also drew inspiration from My Walk Has Never Been Average, a stage play written by Dr. Roberta Hunte, a Black and gender studies professor at Portland State University. Hunte often focuses on topics of inclusion and diversity in her course teachings. Jones Redstone co-wrote the

script with Kjerstin Johnson and also served as director. Once completed, Sista in the Brotherhood made the rounds of film festivals, captured a slew of awards in the process, and was featured at training sessions for groups and even private companies to be a tool for diversity, equity, and inclusion training. It also cemented Jones Redstone’s conviction that writing, producing and directing films was something she wanted to continue pursuing.

She has since completed several other short film projects and has worked on film projects for other Portland area filmmakers. Many of Jones Redstone’s productions have featured all-female crews, including a large percentage of women of color. However, the filmmaker said her main criteria for selecting whom she works with are finding people who share her vision and her passion for telling truthful stories that reveal the realities of characters not typically featured in big-budget, big studio movies.

“It’s really important to me that everyone I work with believe in the project. For the types of stories I tell, that’s very important.”

Her upcoming project is no exception.

“Everyone on this project are people who get this film and are dedicated and committed to telling this story. Some are new folks I’m working with for the first time, and some are ones I’ve worked with before.”

One of the people in the latter group will be Jones Redstone’s brother, James Jones. With a background as a film editor in New York with a focus on television, he has provided editing for some of Jones Redstone’s short films. His work on Mother of Color dovetails with his career transition into feature film editing.

“He’s very experienced. I feel really lucky that I get to work with him,” Jones Redstone said. “Our sibling fights can still manifest in an editing conversation, but I think we have an appreciation of the different skills we bring.”

Having an experienced team will be critical for Jones Redstone to keep on a tight schedule for completing the film, which begins shooting in July. Most film festivals take place in the first few months of the year, and she’s hoping to submit Mother of Color for the next season.

The second time around, raising money for Mother of Color may end up being a bit easier. Since Jones Redstone will have footage that she’ll be able to use as promotional footage, she’s hoping she’ll be able to make funding lightning strike twice. “That (Kickstarter campaign) was a leap,” Jones Redstone said. “But, everything about this project is a leap.” 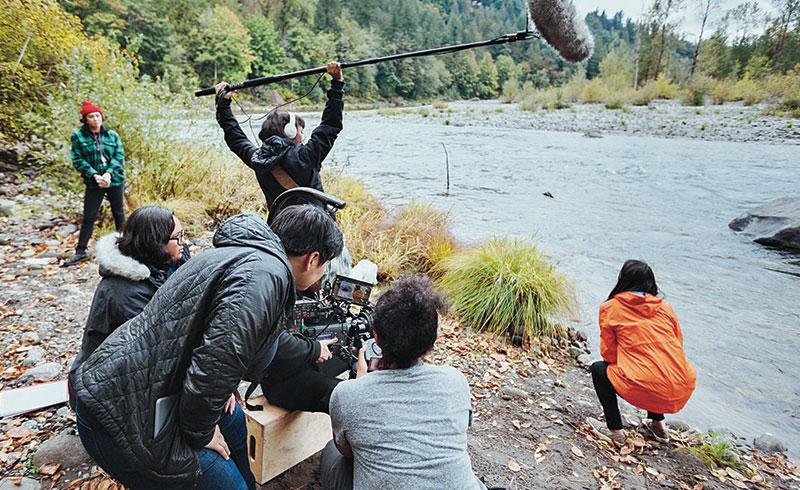 While Portland filmmaker Dawn Jones Redstone often works with crews featuring mainly women of color, she says her main priority in building a team for a project is to find people who support and believe in the type of stories she tells with her films. COURTESY: DAWN JONES REDSTONE