THINKING OUTSIDE THE BOX WHEN RECRUITING CAN ADD DEPTH, NEW PERSPECTIVES AT CONTRACTING FIRMS

Four leaders in the local building industry took the stage recently to discuss ways to boost the number of women in top positions at contracting companies.

Amy Winterowd, vice president of client solutions at JE Dunn; Jennifer Willard, who works in construction management at of Intel; Dana Johnson, owner of Quantum Construction; and Ali LaManna, a project manager with Emerick Construction, participated in the panel discussion, which was organized by the Portland chapter of Construction Specifications Institute as part of the group’s Learning & Libations series.

The CSI chapter decided to hold the discussion based on statistics related to women and leadership at the top 100 contracting firms and Fortune 500 companies across the country. The numbers, based on results from an Engineering News-Record Top 100 list and analyzed by a group called BigRentz, indicate that 44% of companies on the list have women in executive spots such as directors and vice presidents. However, only 16% have women in C-level roles, which tend to be in areas such as chief financial officers and directors of marketing, and only a small handful have women in chief executive officer roles. When it comes to filling construction manager roles, only 3% of firms on the list report women in those positions.

The CSI panel participants all agreed that while efforts are being made locally to increase the number of women in leadership positions at local contracting firms, there’s more that needs to be done.

“It feels like we’re not really moving the needle of representation … even though we’re all doing such hard work and it’s well intended,” Willard said.

Willard thinks the numbers of women in lead roles might shift if the focus of conversations also shifted.

“It’s about all of us belonging,” she said. “So, switch the conversation to (one) where everybody can belong.”

When it comes to finding talent while increasing diversity in firms in general, Winterowd told audience members to think about looking outside the usual recruiting pools. Winterowd’s industry experience, for example, has mainly been in architecture. When she was hired by Emerick, the construction firm had never before hired someone with her background. But Emerick has come to realize that Winterowd’s experience brings new perspective to the firm’s projects.

“People from unrelated industries can provide valuable experiences,” Winterowd said. “The more experience, the more you can pull from to solve problems. Look outside traditional markets and industries to help bring those unique perspectives,”

“It’s easy to move up and down (in the industry) but hard to move horizontally,” Johnson said. “Recognize the talent you already have and see how you can grow that to add depth and diversity to your staff.”

The discussion also included input about hiring with an eye toward how the industry might change in the next five to 10 years.

Willard sees data and analytics as playing increasingly larger and more influential roles in construction, shifts that will require leadership in firms to come armed with new skill sets.

“I think going digital in construction and putting data at the front of our conversations (will) open up diversity,” Willard said. “Most people got into (construction) because they liked people, the interaction. … When we start putting data into it, it’s going to change.”

The panelists also offered advice based on their own personal experiences in the industry.

LaManna encouraged attendees to keep an eye out for people who tend to be the quiet ones in the room. Early in her career, she was one of those people. She credits her success rising up the industry ladder to the fact that she had managers who not only saw her potential, but also deliberately drew her into conversations. They brought her to meetings, where she was able to learn skills and approaches that she then incorporated into how she approached her job and dealt with others in the workplace.

“Grab that younger person in your office to come along with you,” LaManna, who serves as the CSI chapter’s current president, said.

Johnson highlighted the importance of perseverance and encouraged audience members to begin to work toward adopting a mindset that includes and encourages everyone.

“It’s important to raise up everyone we work with, whether it’s men or women,” she said. 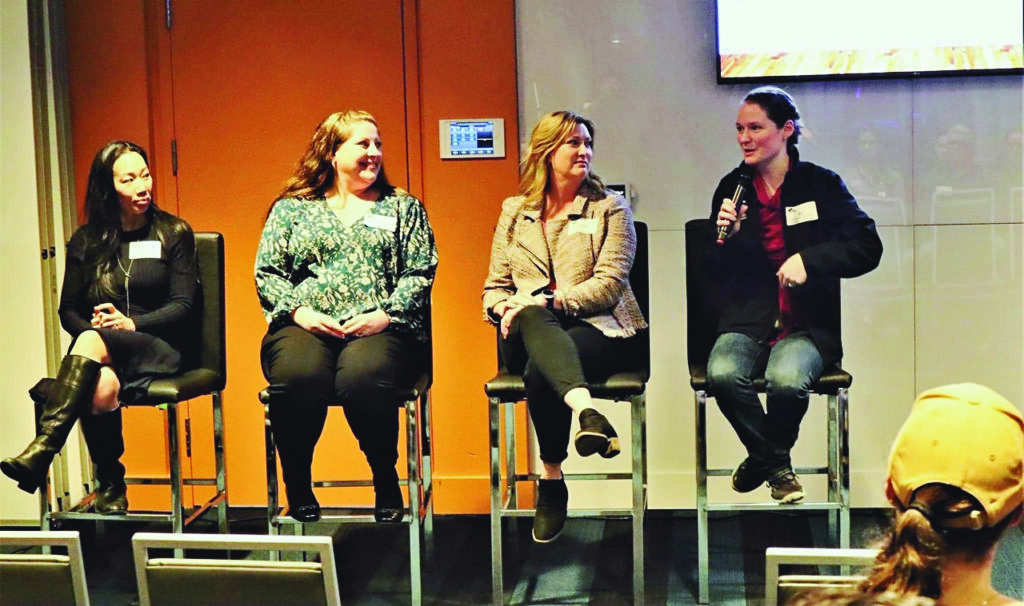 From left: Amy Winterowd, vice president of client solutions at JE Dunn; Jennifer Willard, who works in construction management at Intel; Dana Johnson, owner of Quantum Construction: and Ali LaManna, a project manager at Emerick Construction, took part in a CSI Portland panel discussion about how to increase the number of women in top leadership positions at contracting firms.  Courtesy: Jimbo Gower/GoHam Films