Jeron Kerridge is proof positive that some of the most important lessons a business owner can learn have nothing to do profit margins and everything to do with learning to be honest with oneself.

Sometimes the most important lessons a business owner can learn have nothing to do with spreadsheets or marketing plans. Just ask Jeron Kerridge.

As the owner of Savage Barbell Club, a gym that offers power-lifting training in Tigard, Kerridge has learned the ins and outs of operating a business.

He’s survived months when revenue was so lean that he and his wife, Shayna, used a supply of Scentsy candles as their main source of light in their apartment so they could keep the electricity and heat on at the gym. He took a chance and stepped out ahead of the curve to establish an auto renew membership approach when other gyms were selling packages of sessions. He navigated the sometimes rough waters of marketing via social media.

Through it all, Kerridge and his wife have been able to not only keep the gym thriving, but also establish one of the largest fundraising efforts in the powerlifting world. The fundraiser, Deadlifts for  Doernbecher, has raised approximately $75,000 since it started in 2013.

But it wasn’t until a few months ago that Kerridge made a realization about himself that he says has now resulted in a positive change, both in how he runs his business and how he serves as a teacher for his powerlifting clients. 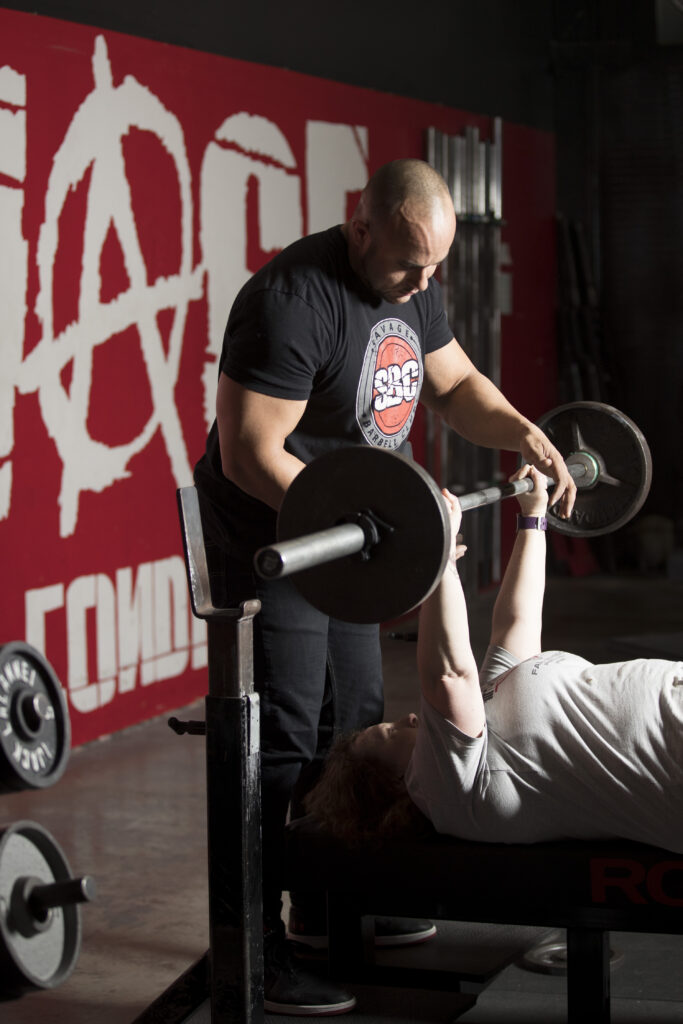 Jeron Kerrige, owner of Savage Barbell Club in Tigard, helps a client with the bench press. Photo by Jaime Valdez

For as long as he can remember, Kerridge was the go-to guy when it came to getting things done. His natural bent toward entrepreneurship surfaced early. At the age of six, he went around his neighborhood, knocking on doors and selling pictures of dinosaurs that he drew. By the time he was in high school, he had established a car detailing business, an effort that ramped up in size after he learned how to build a website to promote his talents.

When he moved to Oregon with his mother and sister, he left behind the rest of his family support system, his friends, even his church group. In his new home, he felt lonely and somewhat abandoned.

In California, he had been working in sales at a 24-Hour Fitness, so he transferred to one of the company’s Portland locations. Although he had always been more inclined to read books or draw than play football or run track, he found he could bury his sense of loneliness by working out with weights.

He eventually moved from sales to a front desk position at 24-Hour Fitness. Before too long, a manager who had noticed Kerridge’s commitment to his own fitness suggested he begin working as a trainer. The role turned out to be a perfect fit for Kerridge.

He eventually decided to open  his own gym. When he learned that someone in Seattle was selling an at-home gym for $3,500, Kerridge and his wife drove to get the weights, loading them in the back of a pick-up truck. Within two weeks, Savage Barbell Club had opened its doors.

The Kerridges learned the ropes of running a business, slowly drumming up a dedicated clientele that now counts between 35 and 40 clients, all between the ages of 16 and 75. About a dozen of those clients are over 60. Most participate in competitive power-lifting events, a community that Jeron Kerridge says is open and welcoming.

It was that sense of community that led the Kerridges to a plan an informal end-of-season lifting party in 2013 that has since grown into an annual fundraiser called Deadlifts for Doernbecher. The event now ranks as the second largest lifting-focused fundraiser in the country.

While the first year of Deadlifts for Doernbecher raised $1,300 for the Portland-based children’s hospital, Kerridge threw himself into building the event. For 2017, he convinced some of the world’s top-lifters to travel to Portland for the  event. Participants even raised their own online donations. Vendors stepped forward to serve as sponsors. When the last weight was lifted, the event had raised $35,000, roughly $10,000 more than Kerridge had expected.

Flush with that success, Kerridge threw himself into last year’s Deadlifts for Doernbecher event. He set a goal to raise $50,000. He contacted roughly 30 well known lifters from around the country, securing agreements  to show up for the event. He began to spread the word, convincing sponsors and vendors to sign up based on that list.

But then, all of the work he’d  done started to unravel. Some of the big name lifters had to bow out due to other commitments. Others just stopped answering his emails.

The more plans for the event fell apart, the harder Kerridge pushed and the more frustrated he became. He’d always been able to power through to take control and make thing work out. But this time, that strategy wasn’t working.

“I couldn’t understand why everyone didn’t care as much as I did,” he said.

His bitterness and frustration threatened to overpower him. He realized he had to take a step back and figure out what was going on. So, he handed the reins of the event to his wife and began to take a close look at himself — for the first time in his life.

“I had to get to the point where I was stripped of all ability to utilize my own smarts to get myself out. I couldn’t outsmart this and I couldn’t out work it,” he said. “I realized I had to face what I was running away from.”

He started to examine why he always felt the need to be the one who made sure everything came together. He had long believed it was because he wanted to make sure the people around him succeeded. But as he looked closer, he realized his motivation had nothing to do with helping others and everything to do with himself.

The toughest part of that self analysis was the realization that trying to be a superhero at his gym kept him in the past from investing energy in his marriage. With an eye towards making amends in that part of his life, he realized he needed to start to give his clients the power to start to make decisions and choices for themselves, from their training to practices at the gym.

That new approach hasn’t just made life better for Kerridge and his wife. It’s also improved the experience of his clients at the gym.

“The entire vibe of the gym is different. Everything is starting to flourish, opportunities are opening up.”