Years of experience meant sushi chef Yoshi Ikeda knew the world of restaurants inside and out. Then he opened his own food cart and found himself faced with a plateful of new challenges. 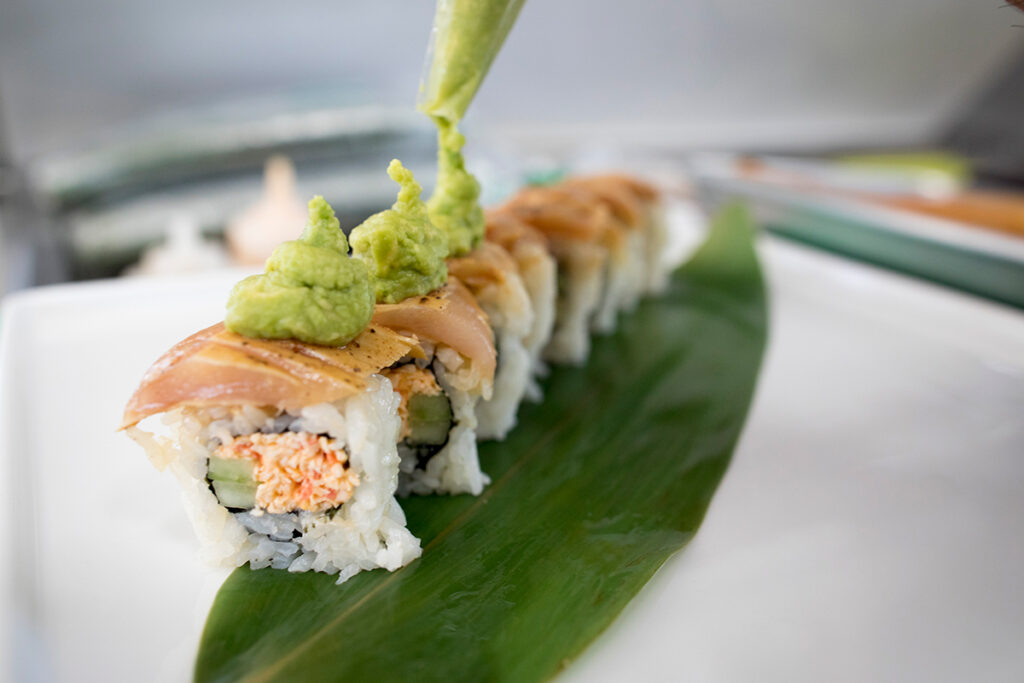 Yoshi Ikeda creates an order of sushi with an artist’s eye. Even a garnish of wasabi is swirled with a graceful flair.

The completed dish is picture-perfect, but it isn’t headed toward the dining room of a four-star restaurant. Instead, the sushi chef hands the order over to a patron waiting at the take-out counter of the bright yellow food cart that Ikeda owns.

Creating sushi that’s as attractive to the palate as it is to the eye is second nature to Ikeda, who learned his sushi skills through 20 years of experience, including a stint with Bamboo Sushi.

What has required more effort has been learning to handle the challenges that come with being the owner of Yoshi’s Sushi, located in a small food cart pod at the Multnomah Village French Quarter on Southwest Multnomah Boulevard.

Luckily, Ikeda didn’t have to start from scratch when it came to learning the ropes as a business owner. He was able to build a solid foundation courtesy of a Portland-based nonprofi t called Micro Enterprise Services of Oregon.

Growing up in Japan, Ikeda watched his father operate a sushi restaurant, but he never felt inclined to follow in the older man’s footsteps. It was only after moving to the United States that he turned to restaurant work to support himself, eventually developing skills as a sushi chef.

A return to Japan to help his father with the family restaurant introduced him briefly to the business end of the operation, but Ikeda continued to focus his main career efforts on being a chef.

Returning to the U.S., he continued to develop his sushi-making skills, a talent he brought to Portland when he and his wife decided to move to Oregon to raise their children. A position with Bamboo Sushi eventually led him into a role managing the restaurant’s Northwest Portland location. He later moved into a position as a regional chef, training new hires to become sushi chefs and developing menus and kitchen procedures.

“I realized a year later that I hadn’t touched a knife,” he said. “I started to miss cooking.”

A couple that Ikeda knew had started a pop-up bar in Northwest Portland, creating a place that restaurant people could go to unwind after work. With an eye toward scratching his cooking itch, Ikeda agreed to help the couple add food to their menu.

The experience led Ikeda to begin thinking about starting his own food-based business. The idea of a sushi catering operation was appealing, but he worried it might not provide a steady enough income. Then a friend who had started a sushi food cart suggested Ikeda consider doing the same. Intrigued by the idea, he began to look for a location.

He knew he wanted to be on the west side because he felt the area was more family oriented. He also knew he wanted some place that had indoor seating so that he could operate his food cart throughout the year.

When a spot opened up at Multnomah Village French Quarter, which features a food cart pod and a handful of outdoor tables along with a heated indoor space with seating, Ikeda knew he had to take the leap or risk losing the opportunity.

In November of last year, he offi cially opened Yoshi’s Sushi as a food cart. 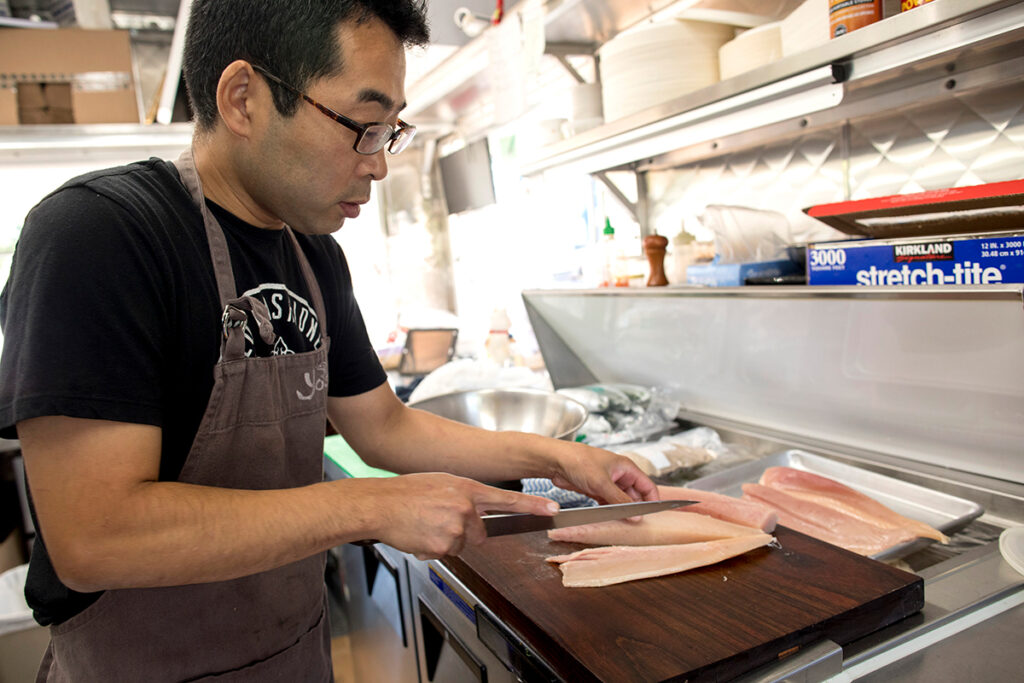 Even as Ikeda began thinking about starting a food cart, he realized he needed some help figuring out the business side of the operation. He eventually found his way to Micro Enterprise Services of Oregon (MESO).

The Portland nonprofit, which also has locations in Beaverton and Rockwood, offers a range of services for micro-enterprise business owners, from building credit and securing financing to developing business plans. While many of its clients are immigrants and refugees, the organization provides services and assistance to a wide range of people who dream of becoming entrepreneurs or business owners.

Ikeda enrolled in a three-year program the nonprofit offers that focuses on business basics. Now in his second year, he’s learned how to write a business plan and create long-term projections for his business. MESO even helped him secure financing to buy his food cart.

Some of the strongest support he received from MESO wasn’t related to the nuts and bolts of running a business, however. It came in the form of the encouragement he received from his mentor at the organization. That support coupled with a nudge from his wife helped Ikeda find the courage to take a leap into the role of food cart owner and operator.

“Before, I was more cautious, (but my wife) pushed my back. So did my mentor, Carmen, at MESO,” Ikeda said. “(Carmen) always says you don’t have to know everything — just enough to get it started and you learn as you go. Before, I needed to know everything before I started. Now, not so much.”

As he heads toward the end of his first year in business, Ikeda is settling into his role as a business owner. He’s at a point where he can step back and objectively weigh the ups and downs of operating a food cart.

Making good sushi takes time and Ikeda doesn’t cut corners. Since opening his cart, though, he’s learned that some people see food cart offerings as a grab-and-go option. So, he and his two employees have posted a note to let customers know their orders may take longer than what they might experience at other food carts.

Most negative comments about the wait time tend to disappear once customers receive their orders.

“Restaurant-quality sushi from the food cart, a lot of people are surprised when they get it. It’s not only the presentation, it’s the quality (of the ingredients),” Ikeda said, adding that he drives daily to Vancouver in order to get the freshest fish possible, even though traffic means the trip can be a slog.

Learning to prepare sushi in the limited space of a food cart has required some adjustment in how Ikeda works. But that smaller space also means less overhead than running a full-scale restaurant, a bonus that Ikeda says fits his current business plan.

“I don’t know if I want to do brick-and-mortar. I saw how much time my dad put into it. I may change my mind. For now, though, I like where I am. I just want to focus on this.”