AMID A GROWING RESTAURANT SCENE IN BEAVERTON, GLORIA”S SECRET CAFE HOLDS A SPECIAL PLACE IN THE HEARTS OF FOOD AFICIONADOS

Gloria Vargas never planned on opening a restaurant, let alone one that has gained a reputation as one of the best-kept secrets in Beaverton.

However, in the 18 years since Vargas opened Gloria’s Secret Cafe in a small, tucked-away storefront on Southwest Broadway, it has earned a reputation for having some of the best Salvadorian food on the west side of the Portland metro area. Even though the restaurant is only open three hours a day for five days of the week, a latecomer might find the doors locked because the restaurant has run out of food.

In a town where restaurants have come and gone during the past two decades, Gloria’s Secret Cafe has emerged as a survivor. Lately, though, Vargas says she finds herself wondering how long she’ll be able to continue that business legacy.

Walking into Gloria’s Secret Cafe feels like walking into Vargas’ home. The space is small, with just a couple of tables. Family photos and framed covers of magazines and newspaper clippings featuring Vargas fill the walls. The kitchen is close quarters — just enough room for Vargas and a friend helping out washing dishes.

But the small kitchen and seating area allow Vargas to move easily between dishing up orders for one table, slipping out to chat with customers at another table, and then scurrying back to the stove to stir a bubbling pot of enchilada sauce.

Vargas works seven days a week, serving lunches Tuesday through Saturday, along with one dinner service by appointment only on Friday nights. Although the cafe is closed on Sundays and Mondays, Vargas uses those days to shop for the coming week’s menu and clean the restaurant.

That pace is hectic, but Vargas says she loves feeding people at her restaurant.
“I don’t know what else I would do,” she said. Cooking for others isn’t just how she pays the bills. It’s a part of who she is and where she came from. 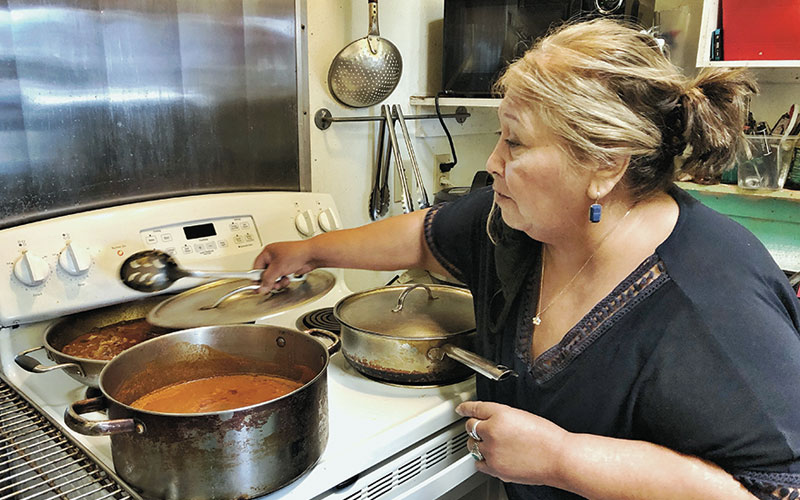 Vargas was born in El Salvador in a small town called Zacatecoluca. Her grandparents grew melons and owned a corn farm, where she learned to make traditional Salvadorian tamales wrapped in banana leaves. Her father, who died when Vargas was little, was a rancher who raised livestock.

In 1973, when Vargas was 13, her mother, Antonia, brought her and her three sisters to North Hollywood, California. Vargas was determined to learn how to thrive in her new home. So she learned English and began living the life of a California girl. When she started working, she found her way into the foodservice industry, working as a bartender and waitress at high-end restaurants in the Los Angeles area. At one point, she even worked for actor David Hasselhoff as a personal organizer, tasked with duties ranging from babysitting to cooking dinner for the Baywatch star and his family.
“I didn’t know what I was doing, but I figured it out,” Vargas said.

In 1979, she moved to Oregon with her boyfriend. Settling in Beaverton, she fell in love with her new community, especially the farmers market. For Vargas, the market felt like home, a way to connect her past with her present.

She found jobs working at Beaverton businesses like Giovanni’s Italian Restaurant and a coffee shop associated with Beaverton Bakery. But her passion lay in cooking food for people to enjoy. To get to know her new neighbors in Beaverton, for example, she would spend the day cooking and then invite them over to eat. One of the biggest hits was her homemade salsa. At one point, her boss at the coffee shop suggested she start selling the salsa at the farmer’s market.

Vargas followed that recommendation and soon found her salsa had attracted a dedicated fanbase. She decided to add tamales, which proved to be another hit. Her daughter, Jenny, even got involved, suggesting her mom use leftover meat from the tamales to make to-order tacos at the market. When Vargas said she already had her hands full, Jenny agreed to handle the taco station.

The manager of the farmers market stopped by one day to tell Vargas about a new store opening up called New Seasons. She suggested Vargas talk to them about selling her salsa and tamales. Vargas figured she had nothing to lose, so she visited the store. While she was there, she ran into a customer from the farmer’s market who introduced her to the manager the New Seasons store.

Before too long, Vargas’ tamales and salsa could be found on the shelves of New Seasons as well as Zupans and other area stores. She turned her home kitchen into an assembly line operation to turn out her products.

However, an outbreak of the swine flu put an end to using home kitchens to make salsa and tamales for supermarkets. She realized that she needed to locate a commercial-quality kitchen to continue the small business that had grown into a full-time operation.

She found the perfect spot in a building in Beaverton. With $70,000 borrowed from family, she set about outfitting a kitchen area. Her limited funds and the small space meant she had to bypass typical industrial-sized coolers and stoves. Instead, she settled for the types of appliances found in an average home. She obtained a restaurant license to operate the kitchen.

Since the space had enough room for a few tables, she started a lunch-time dine-in service. She and her daughter worked together to paint the walls in tropical hues, adding saffron yellow, melon, and teal splashes. Photos of Vargas family, including one of her mother and stepfather, were placed on the walls and in available niches. Even the menu that Vargas created paid tribute to her family. Tacos paid tribute to the recipe her daughter came up with at the farmers market, a beans-and-rice casamiento dish dedicated to her mother, and mole chipotle dishes named after a nephew and a grandson.

Gloria’s Secret Cafe didn’t stay a secret for long. Word soon spread that some of the best food in town could be found in the colorful space that one reviewer on Yelp described as a “teeny-tiny queendom.” With just two household-style refrigerators and a single four-burner stove, Vargas was limited in how much food she could prepare. Fans soon learned that once she ran out, she would close for the day. By the time 2020 rolled around, she often found a line had formed on the sidewalk when she went to open for business each day.

Then the pandemic hit. 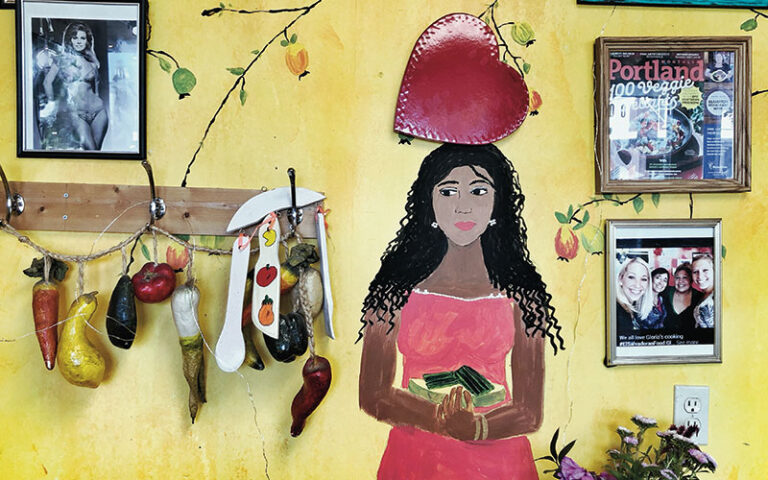 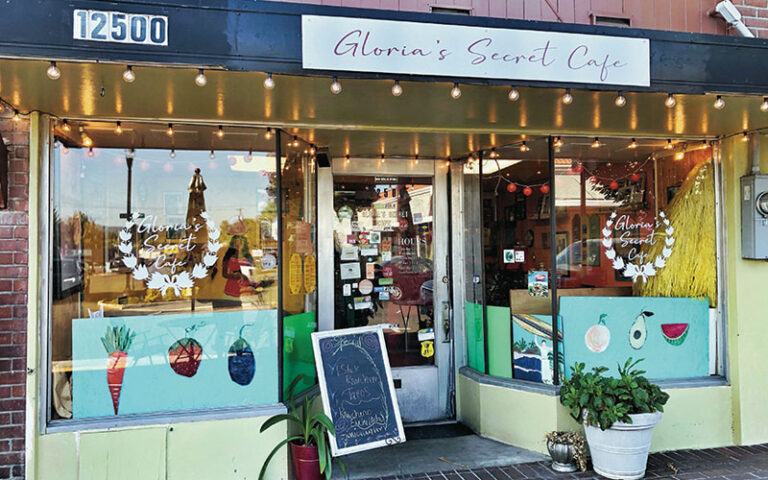 TOP: Gloria Vargas and her daughter, Jennie, painted the walls of Gloria’s Secret Cafe in bright colors with whimsical touches.

COVID-19 brought a mixed bag for Vargas. When state-ordered bans temporarily shut down indoor dining, she saw the line out her door disappear overnight. Vargas said she tried to do take-out, but she felt the quality of the meals was compromised during the delivery process.

Vargas picked up some catering work, and she and her cafe managed to survive 2020. She also was able to get money from federal CARES funding that allowed her to finally clear away the last of her debt from building out the restaurant.
Earlier this year, as more people became fully vaccinated, Vargas noticed business picking up.

Her regulars had returned, including the group from Nike that stopped by regularly for their mango chicken habanero fix. People were calling to secure those coveted once-per-week evening dinner slots.

Vargas began to think that, for the first time, she might be able to realize a profit from the restaurant. But as the number of daily COVID cases has started to climb, Vargas sees things starting to spiral again.

For example, Beaverton Sub Shop, located a few doors down from the café, ended up moving a plan to close for construction in September up a few weeks into August when it became too difficult to find ingredients needed to make its popular sandwiches. Vargas is feeling a similar pinch. Take-out containers are hard to come by. So are tomatoes and the watercress she like to add to her salads. Even the chips she serves with her famous salsa aren’t always in stock.

For now, Gloria’s Secret Cafe is managing to hold on. But Vargas worries that the slowdown on daily sales could create a financial pinch if she runs into an unexpected bill. If that happens, she would probably close the restaurant for good rather than have to go into debt again.

“I just got my credit cards cleared off,” she said. “I’m not going to go back there again.”

But while those concerns are always on her mind, she also has a stove-top full of food being cooked for that day’s customers: a pot filled with a mountain of golden rice, a pool of enchilada sauce and the steak verde special of the day bubbling away. She’s minutes away from opening up for the day. With a smile, she scurries off to stir a pot and welcome the first hungry customers. As long as that door is still open and people can still come in, Vargas will feed them. Gloria’s Café will continue to be Beaverton’s best-kept secret — at least for a little longer.