ABOVE PHOTO: Sabrina de Ceault shows off a copper diffuser, which she uses to extract and concentrate the essential oils that help her create unique formulas for the lotions, body butters and soaps she sells at Sublime Designers, the retail shop she recently opened in Forest Grove. PMG PHOTO: STEPHANIE BASALYGA

Ask most entrepreneurs how they got started and they’ll likely tell you they’ve always known they wanted to own their own small business.
Not Sabrina de Ceault. The owner of Sublime Designers, a new retail store in Forest Grove that carries hand-made lotions and body butters, says her path to entrepreneurship and small business ownership started with an unlikely Christmas gift — an edible chemistry kit she received when she was 10 years old.

De Ceault has had an interest in science, especially chemistry, for as long as she can remember. That interested bloomed the year she saw a kit with ingredients to make bug-shaped gummy candies. She put the item at the top of her Christmas wish list and surrounded it with stars. When she received the kit as her first gift on Christmas morning, she was so excited, she left the rest of her gifts unopened until the next day.

“As soon as I opened that, I ran into the kitchen. I was ecstatic. Like when you see those girls screaming at a Justin Bieber concert, that was me,” de Ceault told Opportunity magazine. “I made everything in that kit in about three days. I was feeding everybody gummy worms and bugs.”

De Ceault soon added another layer to her interest in chemistry. As a teenager, she began focusing on making art as a way to help her heal from her years spent in the foster care system. From drawing and painting, she started playing around with making lotions and realized the activity also allowed her to combine her interest in creating with her passion for chemistry.

After graduating from high school, she decided to go to college and earn a degree in social work. She continued to make lotion as a hobby even as she found a job working with kids in the foster care system.

It wasn’t until she decided to leave the social work field — frustrated by the endless red tape and unyielding processes that she felt kept her from really helping the kids she was working with — that de Ceault decided to pursue her passion for chemistry. She was living in Arizona at the time, but the only chemistry-focused program at a nearby school was in a branch of study that didn’t interest her. So, she began doing some research online. That’s when she came across the American College of Health & Science in Portland.

She enrolled, moved to Oregon and began studying aromatherapy and natural product manufacturing, graduating with honors in 2020. She formulated and patented her first product line — Body Velvet — for a school project.

While still in school, she got a job at a spa, making lotions and other products from their recipes. She soon realized, however, that she wanted more freedom to continue to create her own formulas. She decided to start a small business selling her own products. 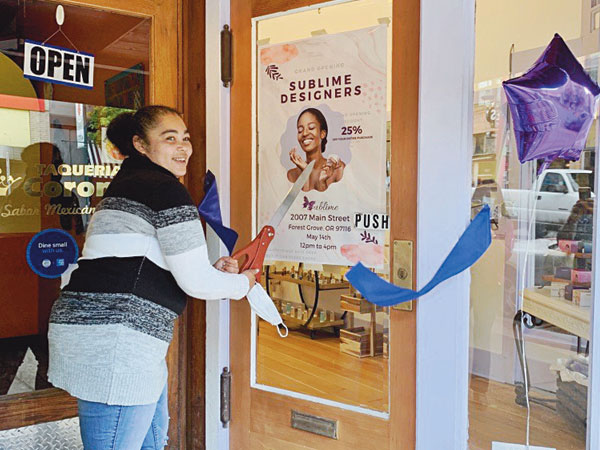 Sabrina de Ceault cuts the ribbon at the grand opening of the first brick-and-mortar location of her small business, Sublime Designers. The shop is located in a historic building along Main Street in Forest Grove. PMG PHOTO: STEPHANIE BASALYGA

While de Ceault was a pro when it came to using science to create lotions and body butters, she was less versed in the basics of business. She eventually found her way to the nonprofit Micro Enterprise Services of Oregon, where she worked with a business advisor to create branding for her products and took classes to create a business plan and learn how to read financials.

In order to keep expenses to a minimum when she launched her business, she decided to lease a small space to use as a lab and production facility in Banks, where she was living, and focus on a mainly online business.

De Ceault knew and trusted the landlord for the small spaces she was using as her laboratory, so they sealed their agreement with a handshake. As she settled into the space and began creating products and selling them, she used her own money to improve the space until it was exactly what she needed.
She likely would have been content to keep her operation small — selling online and at local markets and fairs. However, when the management of her building unexpectedly changed hands, she found herself being told she would have to vacate the space within 30 days. With no formal lease to protect her, she had just a month to find another place for her operations.

She began to look around the Portland metro westside, but everything she found was too big or too expensive. With time running out, she was close to giving up and just setting up her mixing bowls and distiller in her garage when she decided to stop on Main Street in Forest Grove to grab a slice of pizza. That’s when she noticed the empty storefront along Main Street. At roughly 750 square feet, it was the perfect size for her first-time brick-and-mortar location.

The backstory of the brick-and-wood building also seemed like a perfect fit. When it was built in 1920, it housed Forest Grove’s first official barber shop. For 5 cents, men received a shave and a haircut. For a bit more, they could even take a bath in a tub in a separate back room. As de Ceault peered through the window, she could see the space still contained the little cubbies where each chair used to be and an original sink. The walls even boasted original mirrors along both sides that she immediately realized would be perfect for showcasing her products.

After meeting the landlord and negotiating a lease, de Ceault found a contractor and began to turn the interior of the space into the new home of Sublime Designers. While she wanted to create a feel that matched the business, she also felt a strong responsibility to honor the heritage — and the history — of the building.

She switched out the nondescript overhead lights for something a bit more stylish. The plan white ceramic sink was traded with one made from glass in a tone of purple that aligned with her business colors. Plain white paint on the walls was replaced with a lilac tone, also in harmony with Sublime Designers’ color palette.

For the floors, however, she decided to keep the original pine floors visible, allowing the dings and poke marks to help tell the history of the small businesses and customers that came before. She handled the sanding herself and then brought in a contractor to apply a layer of oil to bring out the natural tone. She used pre-made shelving featuring similar light-colored wood to create a harmonious flow through the space.

“I didn’t want to take too much from the feel of (the space),” she told Opportunity Magazine.

De Ceault feels the location of the shop is perfect for her business. It has high street visibility and great foot traffic. It even has a prime location for tapping the crowd who comes to a weekly downtown farmers market.

“I love the area. I’m literally in the heart to Forest Grove,” de Ceault says. “Any time there’s a festival or an event, it goes right past my front door.”

The historic character of the building did pose a few challenges along the way to opening the shop, however. De Ceault originally thought she could use a hotspot to provide internet for her Shopify system. In addition to allowing her to process credit card payments, Shopify serves as a system for tracking her inventory and compiling financial information for bookkeeping and taxes. She soon realized she needed a faster, more reliable connection.

However, when a technician came out to run the line for the Internet, she was told that the age of the building meant she would have to bring in a contractor to drill holes in the brick before the Internet could be installed.

She had been able to tap emergency relief grants for small businesses impacted by the pandemic to cover the cost of preparing the space for her shop. But those funds were almost gone. She soon realized the benefit of having an agreement with her landlord based on more than a handshake. When she approached her landlord for advice, he told her not to worry about anything. He took care of getting the holes drilled — at no charge to de Ceault. Before she knew it, she had wi-fi in her building and was back on track with her plan.

Since then, she’s been building a steady clientele of new customers. While the Shopify system she uses helps her track inventory, she’s still working on her timelines for turning out enough products to keep the store shelves stocked. Body Velvet, for example, is a two-hour process from start to finish, meaning that once a batch cools she can package it and put it on the shelf that same day. Once it cools, she can package it and put on the shelf that day.

She said that one is a product she will constantly make as inventory runs low. Soap, however, takes six weeks to cure. So, making that takes more careful planning and scheduling on de Ceault’s part.

De Ceault is a one-woman show when it comes to manufacturing and packaging all of the products she sells at Sublime Designers. While many entrepreneurs hand over their recipes and formulas to third parties for the manufacturing and bottling processes, de Ceault prefers to handle everything herself. During off-business hours, the counter at the back of the shop transforms from a place for customer transactions into a sort of laboratory complete with mixing bowls, funnels, measuring cups and a copper distiller to extract and concentrate the essential oils that give each of the items in her product lines their individual scents and personalities.

Her lotions and butters all start with a basic recipe that includes water, oil and an emulsifier. She selects the actual items she uses, which are all certified organic, with an eye toward achieving specific end results. Pomegranate oil, for example is an oil with a lot of body that she can use as a base without imparting a greasy feel.

“Oil and water mix. People are always telling me how oil and water don’t mix and I just laugh and say actually they do — if you know how,” de Ceault says. “I often use that metaphor for my life when I meet people. Just because at first you might not mix with them, sometimes you’ve just got to approach them a little differently and you can see how your relationship can change.”

Right now, Sublime Designers only offers de Ceault’s own product lines. She has decided not to carry other people’s hand-made items. While she may change her mind, she knows that any outside items that might eventually find their way onto the shelves of Sublime Designers will have to be crafted with the same care and attention to chemistry and formulation that de Ceault brings to her own products.

De Ceault already has plans to grow Sublime Designers. Once she has her production schedules fined-tuned, she will be ready to roll out several new products that she came up with during the pandemic. She also currently is pursuing a master’s degree in chemistry and hopes to use what she learns to one day have her products reach women around the world.

“I want to change the narrative of what’s beauty and what’s not,” de Ceault says. “I want to change women’s views of themselves and let them know (they are) beautiful no matter what they look like.”