CONVENTIONAL WISDOM HOLDS THAT FOOD CARTS ARE USUALLY A PRECURSOR TO A BRICKAND-MORTAR OPERATION. THE COOKS AND CART OWNERS WORK LONG HOURS IN CRAMPED, HOT SPACES TO EARN A NAME FOR THEMSELVES, PERFECT THEIR RECIPES AND BUILD UP ENOUGH SAVINGS AND REPUTATION FOR A “REAL” RESTAURANT.  AS IT TURNS OUT, THOUGH, THAT THERE ARE REALLY VERY FEW TYPICAL FOOD CART JOURNEYS. THERE’S ALWAYS A STORY.

When it comes to how food carts fi t in the plans of aspiring food entrepreneurs, there’s no written-in-stone recipe for success.

Sheila Bommakanti and Elizabeth Golay met in Seattle after Golay graduated from California Culinary Academy. The couple headed to Boston where Bommakanti attended Suffolk Law School while Golay served as an apprentice under Ana Sortun, a James Beard Award-winning chef, at Oleana Restaurant in Cambridge, Massachusetts.

Bommakanti and Golay married in 2009 and moved back to Seattle. Golay went to work at a popular Capitol Hill restaurant called Poppy, where she eventually rose to head pastry chef. Bommakanti, meanwhile, focused on her law career.

The couple moved to Portland in 2012. The next year, Golay opened a food truck, Tiffi n Asha, with a Southern Indian-inspired menu. It soon became a Portland favorite, first at a location in the Alberta District and later on the bustling corner at North Mississippi Avenue and North Beech Street.

“On most Saturdays, I’d work at the cart with Elizabeth,” Bommakanti said. “(Elizabeth) has been professionally cooking for over 20 years, and she always wanted to work for herself. As we moved to Portland due to my job, it seemed like the perfect time and place.”

Less than a year later, Bommakanti traded her career as a civil rights attorney for a full-time position working beside Golay at the food cart. The accolades came quickly from major publications, including The Guardian, the New York Times, The Washington Post, Food & Wine and Eater, as well as from an extensive list of local and regional publications.

“For Elizabeth, it was always the goal to open a restaurant,” Bommakanti said. “Starting as a food cart was a great way to build the business and get the word out there about what she was doing.”

In January 2017, the couple left the world of food  carts behind when they opened Tiffi n Asha as a brickand- mortar restaurant at 1670 N.E. Killingsworth St.

“I’m not so sure there’s any one way to (move from a food cart to a full restaurant)” Bommakanti said. “If that’s what you want to do and you’re happy with it …it all depends on what you want. For us, it was a chance to work and grow and learn together. There’s a real charm to food carts.”

Those charms included a fl exibility and simplicity in set-up and general operation, at least when compared to the effort required to establish and run a formal restaurant.

“… You have to want (a brick-and-mortar restaurant)” Bommakanti said. “We walked into a concrete shell. We had to do it all: where equipment would be, all the electrical, plumbing, HVAC. It takes a lot of time and expense to set up a new restaurant. I think the biggest hurdle was coming to grips with it taking longer and costing more than we thought it would. This isn’t a business for the faint of heart.”

After just over two years, the restaurant’s reputation and customer base are still growing, owing as much to a good interactive relationship between Golay and Bommakanti as to an established reputation and award-winning food.

“She’s the chef,” Bommakanti said. “I’m the manager. We both have our strengths. Between us, we make it work.” 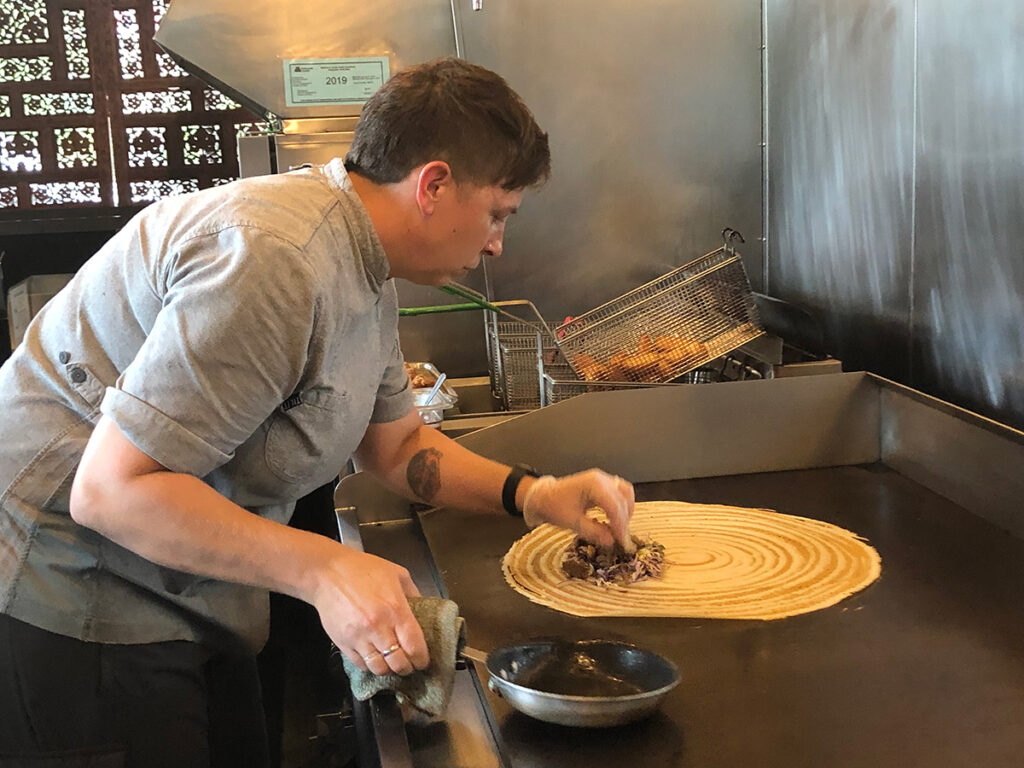 Chef Elizabeth Golay prepares an order at Tiffin Asha, the Portland restaurant she operates with her wife and business partner, Sheila Bommakanti. Golay originally started the eatery as a food cart before moving it to a brick-and-mortar location on Northeast Killingsworth Street.  Photo by: Stephanie Basalyga. 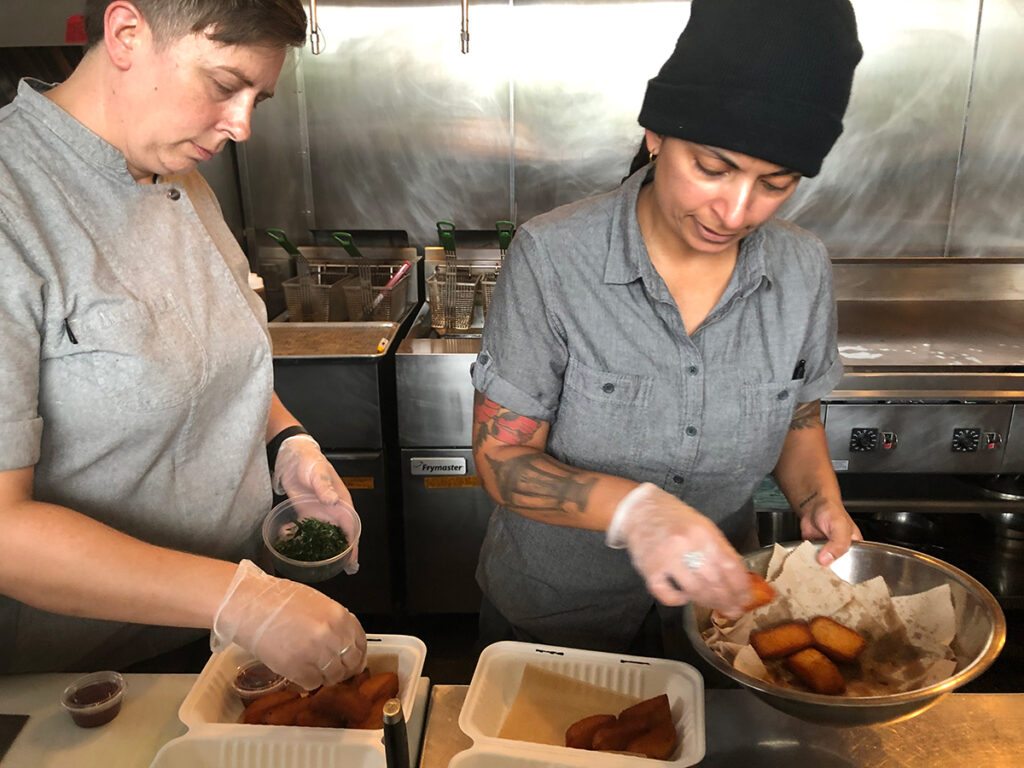 Food carts traditionally tend to be owned and run by men, Melissa “Mel” McMillan says. She points to a statistic that indicates just 4% of Portland’s food cart owners/operators are women.

McMillan started her first restaurant, Sammich, in a cozy spot in Ashland, Oregon, six years ago. The eatery quickly developed a devoted following for her creations, including the Pastrami Zombie, a leading favorite piled high with house-brined and slowsteamed pastrami on light rye with slaw, Swiss cheese and a special Pastrami Zombie dressing.

McMillan wanted to open a second Sammich brick-and-mortar restaurant in Portland, but the expense was out of her immediate reach. As an alternative, three years ago, she opened Pastrami Zombie, naming the food truck after her signature sandwich. Tucked into a quaint foodie alley on North Mississippi Avenue and North Skidmore Street, the truck is easy to spot courtesy of the de-facto motto on the hood: Try Not 2 Suck.

Between the original Ashland location and the food truck, McMillan earned rave reviews and attention from local and regional publications as well as national mentions from the Huffington Post and Guy Fieri of Food Network’s “Diners, Drive-Ins and Dives.” However, the accolades didn’t shelter McMillan from some bumps along the way.

“I wanted to go to a bigger city,” said McMillan on

her desire to open another restaurant in Portland. “I experienced some sexism. They didn’t think I knew what I was doing. At one time I found out my brisket  supplier was charging me more than a shop down the street and I was buying more from him than anyone else in Ashland.”

With James Beard Award-winning chef Naomi Pomeroy as her mentor, McMillan was better able to navigate the complexities of Portland’s storied food cart business. “After I won a bunch of awards, they started treating me fairly.”

The success she enjoyed allowed to eventually open a Portland brick-and-mortar location, SammichPDX, on Northwest 21st Avenue and East Burnside Street. Like the original Sammich restaurant, the Portland version offers a cozy – but lively – venue with seating for 24 people.

“It gets loud in here,” McMillan said. “We’re yelling orders and the kitchen yells back. It’s really a lot of fun.”

Moving between restaurant and food truck is more of an integrated effort than a mindset of “the truck and the restaurants are different,” McMillan said. “I like both the same. It costs more and takes more labor to own and operate a restaurant, but I wouldn’t trade it. Any given day there’ll be something – a burner out, a hot-water heater issue – I’m really a problem solver.”

She also credits her employees.

“They’re my coworkers. I treat them well and pay them well. They deserve it and I love it. They’re awesome.”

In spite of the myriad challenges of running all three operations and tending to smokers and steamers laden with slow-cooking slabs of meat, McMillan still gets a thrill about what she does.

“It’s a marathon, not a sprint. I really want to stay focused on being myself and doing the right thing.” 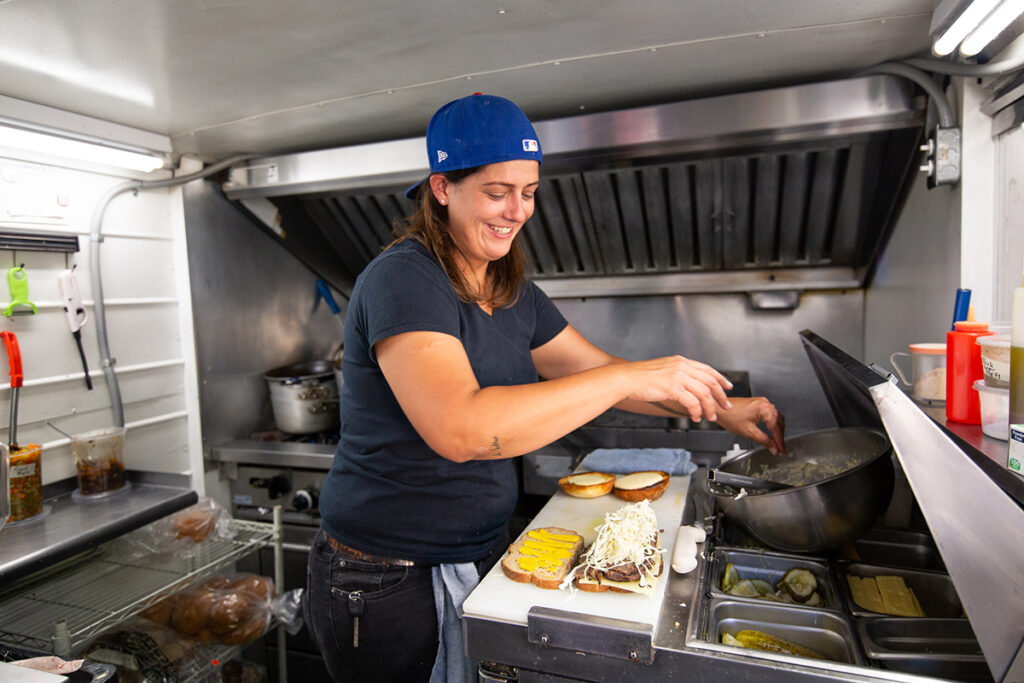 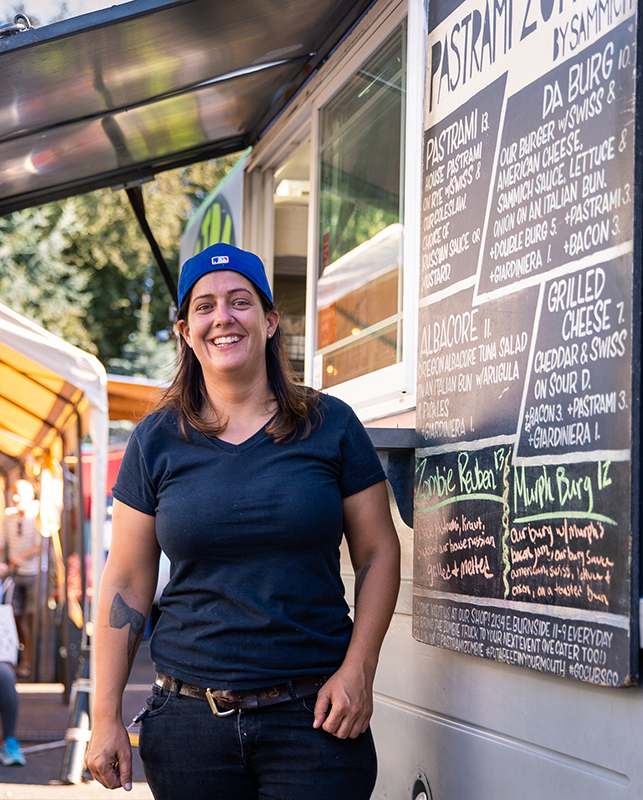